Paterson Council President Jeff Jones didn't like the idea of being buffaloed into an endorsement of incumbent Gov. Jon Corzine, particularlysince he was no great fan of the governor's, and since the man proddinghim to sign on the dotted line was longtime nemesis Mayor Jose "Joey" Torres.

Jones wants Torres' job, and their 2010 mayoral contest will no doubt intensify on the other side of Nov. 3rd,once the gubernatorial race is decided between Corzine and GOP challenger Chris Christie.

But after mulling over the possibility of signaling that he wants Corzine to receive the ejector buttonby backing Christie, in part as a juxtaposition to Torres, who nurses a close relationship with the governor, the council president of New Jersey's third biggest city last Friday finally decided to back Corzine's reelection.

"I had to do an assessment," he told PolitickerNJ.com, "and I believe Torres was trying to take from me my Constitutional right to choose by forcing me to declare on his timetable, instead of mine. Well, now I've talked to Christie and some of his people, and I've talked to Gov. Corzine, man to man, Marine to Marine."

The governor admitted he didn't do great in his first term when it came to communicating with a broad spectrum of Paterson elected officials, said Jones.

He mostly worked his channels with Torres.

"But he told me communications would improve and I hope and pray he will help us," said Jones, a political science preoffesor at William Paterson University and a decade-long veteran of the city council. "We need direct help to make better legislation for the citizens of our city, who feel helpless. Yes, monoliths and monuments are getting developed, butour people are not getting developed.To me, it's about access, and the governor has opened up."

Approachingthe 2010 election in a city where President Barack Obama enjoys tremendous popularity, Jones also had toweigh the political intelligence of folding his arms and refusing to back Torres/Corzine when the race was fast becoming Corzine/Obama.

The President appearedin New Jersey in support of Corzine other the summer, then tethered himself more securely to the incumbent Democratic governor with appearances last week and another one scheduled for this coming Sunday.

"The reality is Governor Corzine is a strong supporter of Barack Obama's," said the council president. "What I think I'm reading right now is that we (Democrats) just lost Virginia yesterday, which means I will do all I can do to help Corzine stay in office in New Jersey, in part to help Barack Obama nationally, because I'm a Democrat.

Jones said he encountered Christie at a picnic in the waning days of summer. The two men spoke briefly. Jones also observed the debates.

"I don't see a connection there," he said, on reflection of Christie's gubernatorial candidacy. "I hope Gov. Corzine does the right thing if he's reelected becauseI'm going to stick with my choice. This is a tough election. In terms of general support for the governor in Paterson, right now I don't see it, and I don't feel it." 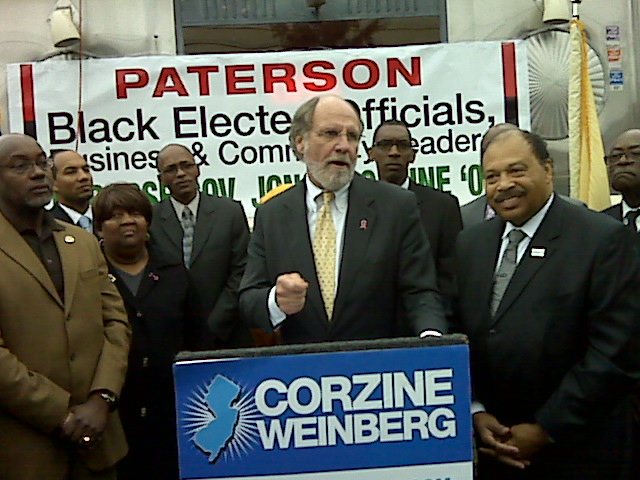