Those dynamics in the 27th District havecreated speculationthat McKeon, alert to a shakeup as redistricting looms next year,may be anglingto head thestate Department of Environmental Protection (DEP) if Gov. Jon Corzine is reelected.

"No one's asked me (about serving as DEP commissioner)," McKeon, who on Wednesday night co-chaired Caroline Kennedy's rally at the Barclay for Corzine, told PolitickerNJ.com.

He added, "I'm totally focused on my own re-election."

But Codey's situation may impact the 51-year old McKeon, as the sitting senate president faces the prospect next year of being unseated by Senate Majority LeaderSteve Sweeney (D-West Deptford) and the empowerment ofCodey's politicalantagonists to redraw a district map for 2011 that would favor theirclosestallies and conceivably weaken the current legislative occupants of District 27.

It was Essex County Executive Joe DiVincenzo whoforgedthe alliance with South Jersey to back Sweeney for Senate President, in exchange for South Jersey's support of Assemblywoman Sheila Oliver (D-East Orange) as Speaker of the Assembly.

"It's sad," said McKeon. "I'm a great admirer of Gov. Codey's, but it looks like he doesn't have the support he deserves. As it relates to me, I am just going to work hard and focus on getting re-elected."

If the veteran legislator and former Governor Codey decides not to pursue re-election to his senate seat in 2011, the DiVincenzo-Sweeney alliance and their redistricting and county committeecadrewould likely press forthe spoils of war to go to one of their own organization members and try to exact another senator from among their own ranks out of the deal before agreeing to give independent Democrat McKeon the line as their party'snominee for state senate.

Whilerespectful ofhis prime sponsorship of the Highlands Act and hisleadership roleas chairman of the Assembly Environment and Solid Waste Committee, Essex County sources say it's unlikely McKeon would shelve his successful local law practice to make a move to the DEP.

Against the backdrop of the Codey-Sweeney drama and the potential tenuousness of the district for McKeon, there was recent buzz thathe mightdecide to protect his West Orange mayor's seat when it's up next year instead of abandoning thepost he's held for a decadeas most local politicos have long believed.

To that point, McKeon on Wednesday night said, "You never rule anything out completely, but without sounding self-serving, the issue is it's time to turn the page (on the mayor's job)."

Whatever new challenges Codey's top of the ticket situation coupled with redistricting create for McKeon next year, the West Orange politician firstintends tosecure his legislative seat, and claimpart of the creditfor an open space bond question that will appear on the Nov. 3rd ballot and at the moment appears headed for a double digit victory, according to a poll released this week.

On Wednesday night, when McKeon introduced former Gov. Brendan T. Byrne, he lauded the elder statesman and onetime namesake of the Brendan Byrne Arena from West Orange as an enduringprotector of the environment.

"As governor, he preserved over a million acres of the Pinelands," McKeon told the crowd. "The Brendan Byrnes State Forest is better than any old arena anyway." 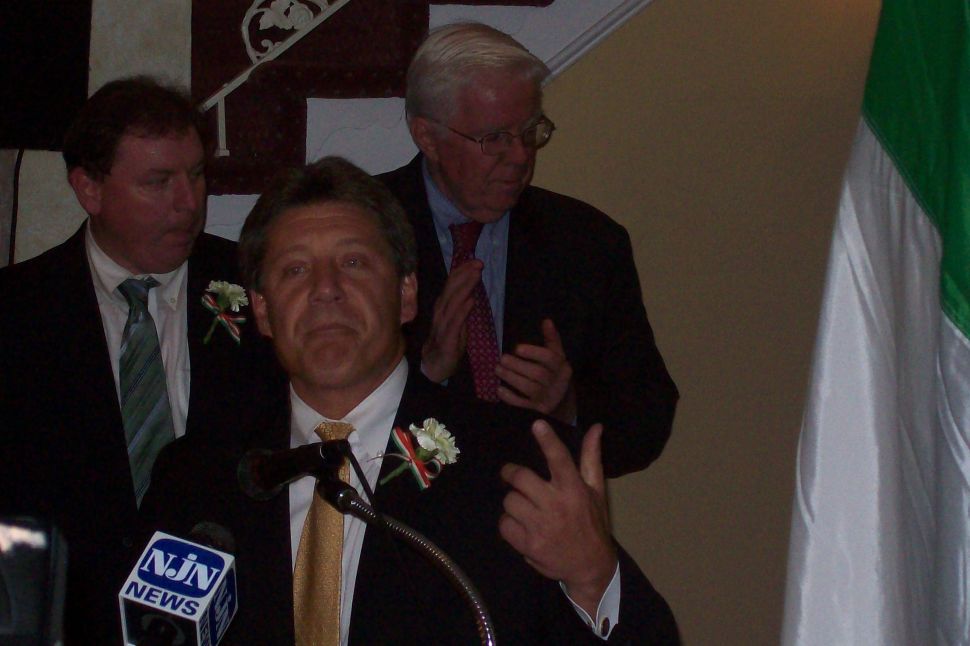