On the most likely to be unemployed list for 2010: Secretary of the Senate Ellen Davenport. With the likelihood that Richard Codey (D-Roseland) will not return as Senate President, it look like Davenport, a close Codey ally who served as Mayor of Maplewood and as an Essex County Freeholder, will be a casualty of Codey's leadership fight with Stephen Sweeney (D-West Deptford). The job pays $81,000-a-year, and the post traditionally changes along with the leadership. Davenport, 67, got the job after Democrats won control of the Senate in 2003.

The Assembly Clerk is Dana Burley, a 44-year-old Camden City Councilwoman. The retirement of her political patron, Assembly Speaker Joseph Roberts (D-Camden), puts her at some risk. But unlike the Senate, there is no real change of control in the lower house. If Essex Democrats claim the $90,000-a-year position (as Camden did when Roberts succeeded Albio Sires in 2006 and named Burley), Burley won't have a problem finding a new gig; South Jersey Democrats are ruling the world these days, and Burley is a member of that organization.

One Democrat said that Burley could be a candidate for the fifth district Assembly seat, if the Democratic nominee, New Jersey AFL-CIO President Donald Norcross, winds up replacing Dana Redd (D-Camden) in the Senate. Burley could also move to the upper house as Secretary of the Senate under Sweeney; if she did, she would become the first person in state history to serve as both Secretary of the Senate and Clerk of the Assembly. 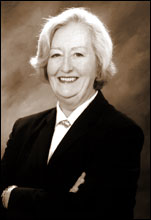