BELLEVILLE – The self-proclaimed party of diversity lined up at the start of the Columbus Day Parade today, and if the presence of a single woman packed into this brace of gray and blue suited would-be alpha males heartened Democratic Party onlookers, the downside was that Nutley Mayor Joanne Cocchiola is, in fact, a Republican.

"We're from every part of Italy you can imagine," cracked U.S. Rep. Bill Pascrell (D-Paterson) in an effort to explain the gender domination factor; indeed, they even had an Irishman in there, Essex County Clerk Chris Durkin, who made a point, in the midst of all the pre-march backyard chest-thumping, to compliment Celeste Caputo, wife of Assemblyman Ralph Caputo (D-Belleville), on the food.

Making an appearance here at arguably the area's most important Columbus Day event and forced to share a piece of the street with a Christopher Columbus lookalike in Genovese regalia who, when addressed, only responded in Italian, Gov. Jon Corzine relished a chance to inflate his wobbly image in this blue collar, Italian-Irish-Latino Catholic stronghold where Newark's white ethnics re-entrenched after the 1967 troubles.

Twenty-three days from D-Day, he leaned heavily on the locals.

"He opens up his home the way he opens up his heart," Corzine, affectionately gripping the back of Caputo's neck, told a crowd of local Democratic Party rivals who shelved their differences long enough to occupy the same patio with the governor moments before convening in the street at the head of any number of school marching bands, 1940s and 1950s cars, and party flotillas.

If Democrats could argue that their Essex County female strength comes from other districts, Cocchiola's only gender balance blender on the day came in the form of GOP helpmate and Republican lieutenant governor's candidate, Monmouth County Sheriff Kim Guadagno, who aggressively worked the street far, far behind the frontline presence of Corzine and company.

In a two-thirds Democratic town – "You don't want to say it's safe for Corzine," said Councilman P.J. Mac Donald, "In this economy, no one's safe, but he should win here" – the backyard goodwill at Caputo's house belied some anxiety-inducing majority party undercurrents in Belleville.

Forget momentarily about Essex County, the town's a local warzone, or has been for two years running.

Kimble won both of those battles – in addition to school board races – and subsequently endorsed Caputo for reelection in a ceasefire statement. The question now is whether Caputo feels suitably chastised to stand down next year when Kimble runs for mayor again, or whether he's going to challenge the retired police chief turned town boss. But the implications of these fights go beyond Belleville.

"Five of our council people have come today to show how much they support our governor," Kimble reminded Corzine.

On a larger scale, there's the issue of 2010 redistricting, and the day-by-day political slippage of Senate President Richard Codey (D-Roseland), whose own party last month – with the help of Essex County Democrats led by Newark North Ward leader Steve Adubato and DiVincenzo – iced him in his quest to remain in the upper house's chief leadership position and plan to supplant him come January with Senate Majority Leader Steve Sweeney (D-West Deptford).

Up for reelection in 2011, the anti-establishment Rice sided – as always – with Codey, a safe bet in most years past, but not this time, as Rice ended up on the downside of a 14-8 vote against Codey. Caught once again on the outside of his party's power paradigm, Rice, who's served the 28th District since the early 1980s, without a redistricting ally like Codey, could find himself folded into new territory that doesn't include Belleville and Bloomfield as his 28th District does now, where he has forged strong ties with Kimble and Kimble's council allies.

If Senate Minority Leader Kevin O'Toole (R-Cedar Grove) – an ally of Adubato and DiVincenzo – gets a strengthened seat at the redistricting table, chances are Bloomfield and Belleville (home to a growing number of Latinos) could be added to the 29th District, now dominated by state Sen. Teresa Ruiz (D-Newark), a political acolyte of DiVincenzo and Adubato – a move that would only strengthen Ruiz's power base.

If that happens, Rice's new district would likely retain its West and Central ward portions and, in one possibility, fold southward, to include Newark's South Ward and Hillside Township. Such a measure might pit him against, for example, Assemblywoman L. Grace Spencer (D-Newark), an ally of Newark Mayor Cory Booker – ultimately a win for Adubato as it would force political combat between two mostly independent entities – Rice and Spencer, who happen to be friends.

The even more empowered power brokers could also pit Rice against his old pal Codey in what for the two renegades would be a nightmare blending of the 27th and 28th designed as the ultimate gladiatorial spectacle for Adubato and his allies – but this is unlikely, as Adubato has two prospective legislators who live in the 27th District: Alagia and Durkin, who would stand to gain from the 27th remaining a majority white voting bloc.

Though such moves are speculative right now, the wounding of Codey has deepened divisions among independent Essex D's and the Adubato-DiVincenzo-run establishment.

Yesterday, for example, the senate president was a no-show at the campaign breakfast of Sheriff Armando Fontoura. Codey's a co-chaif of Fontoura's campaign, but Fontoura's also a frontline captain of the same Adubato-run political operation that wanted Codey dethroned.

"They're a mess," offered Andy Bloschak, a Republican Assembly candidate in Caputo's District 28, trudging the parade route with Guadagno and other assorted GOP sacrificial lamb candidates from Essex County, on the ballot in an effort to give the appearance of an alternative in the face of a Democratic Party that for all its back dramas, regularly obliterates the opposition.

If it's true, Kimble doesn't let on given the platform of Caputo's patio moments before the parade kickoff.

"It's early yet," the mayor said. "I don't think they have anyone out there on the horizon they're going to run against me."

He made his remarks just as Caputo introduced Strumolo Burke, and only later, after exhausting the dignitary list, called on Kimble to address the crowd.

Caputo won't deny he's positioning Strumolo Burke, who could be conveniently used to make the case for gender diversity in the mayor's office, while expunging a political rival. Neither does he endorse her for mayor.

"Marie is always running," he said. "I haven't endorsed anyone at this time. We're focused on this race, my race and the governor's race. Ray and I are getting along well. I will tell you this much, Andy's a nonfactor."

Huffing behind the blandly unadorned Belleville Republican Party banner, Bloschak knows his is not exactly number one on the list of targeted Republican races, and indulges in the eccentricities of a candidate whose only remaining message is speaking candidly, electability be damned.

"Ralph's chief ally in Belleville is Mario Drodz," he said. "Mario's a dead-ringer for Sonny Bono, and funnily enough, I used to babysit Sonny's kids – the kids of the real Sonny Bono – when I lived in California."

But Guadagno, jogging relentlessly back and forth in the vicinity of the local Republicans here, including register candidate Terriann Moore Abrams and District 36 Assembly candidates Carmen Pio Costa and Don Diorio – is a streamlined messenger in motion.

"The only way to bring jobs back into the state is to cut taxes, and I object to those who simply say we want to cut taxes for millionaires – we want a ten percent cut across the board for all business owners," said the LG candidate, who against the backdrop of a discussion regarding her running mate's weight, appeared determined to be the picture of fitness as she flitted from one side of Franklin Avenue to the other and back on the walk from Belleville to Nutley.

The Star-Ledger today endorsed independent Chris Daggett in the governor's race, and to that tidbit of news Guadagno said with a shrug, "If you want to throw away your vote, vote for Daggett."

Most media outlets liked Guadagno's debate performance last Thursday night against her rival, state Sen. Loretta Weinberg (D-Teaneck), and when asked if she has otherwise felt muzzled on the campaign trail, Guadagno said no way.

"I am so completely lucky to be a part of this campaign," she said. "I have three children at home and I have had a chance to help those three children live in New Jersey."

Crossing the Belleville border into Nutley (5,600 registered Democrats to 3,600 registered Republicans) she beelined to a man sunk in an easy chair on the side of the road surrounded by his wife and daughters.

The woman pointed to a picture of Christie on a piece of campaign literature.

"You're running with him?" asked Denise DiSilva.

"Then I'm voting for you," DiSilva said.

"We're just getting taxed to death, and we can't take it anymore," confirmed her husband, Jack DiSilva. "We've got three kids."

However, Mac Donald, at the wheel of a speedboat hooked up to the back of an SUV vehicle bringing up the rear of the parade behind Guadagno, said Christie as the bearer of no detailed economic alternative, in his view – has proved a one-dimensional gubernatorial candidate.

"This is a guy running on a record of throwing a lot of people in jail," said the councilman. "He's a big deal because he busted people for corruption in New Jersey? Come on, that's like shooting fish in a barrel, everybody knows that."

Leading the parade with DiVincenzo, Corzine heard at least one, "Where's my rebate check?" shouted at him from the crowd, but otherwise enjoyed a mostly positive reception.

"This is a governor who inherited a mess in Trenton, was trying to do something about it, and then the whole national ecnomy went under," said DiVincenzo. "You want to blame him for that? Please. He's putting the state on the right path."

Sources close to the underground Adubato, meanwhile, report that with Codey apparently out of the way, Sweeney incoming, and strong relations intact with either Corzine or the Newark-born Christie – the North Ward boss is as close to content as this politicalmaelstrom allows.

And although there was no Codey, no Rice, and no show of women representatives on the day from the Democratic Party, DiVincenzo standing above the party troops with the govrnor in the parade's forward guard, again reveled in being able to help the ascent of his ally, Assemblywoman Sheila Oliver (D-East Orange), who is poised to become speaker of the Assembly, and the governing body's first African-American woman speaker.

"All this talk about me going after Codey – nonsense," said DiVincenzo. "Remember, we backed Paul Sarlo for Senate Majority Leader and he lost to Steve Sweeney. That's when we realized Dick didn't have the votes. He doesn't have the votes. What can you do if you don't have the votes? It was then, in February, that I called Sheila in and asked her if she'd be interested in being speaker, and she told me, 'yes,'" in the name of diversity, so much the better if forged at the expense of a longtime political enemy. 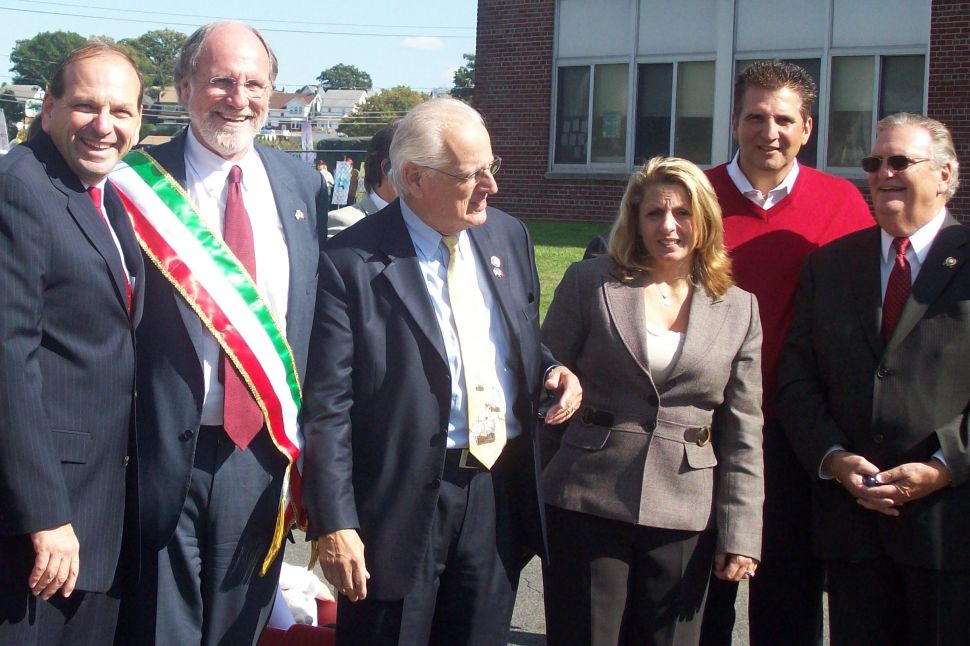