"Jon has said he governed in tough times," said the vice president. "Let's give him the chance to govern in good times."

Deadlocked with Christie, according to most polls, Corzine's handlers want him to repeat a double-barrel message from here until Election Day two weeks from now: remind people thatheacted earlyto blunttheimpact ofthe recession, and that the pro-unon, pro-choice, anti-gun incumbent shares the values of most New Jersey voters.

Biden was here to amplify that two-pronged argument.

"Isn't it great we have Barack Obama and Joe Biden in the White House?" Corzine asked the crowd. "Their values are our values, right?"

Called in to back up Biden and Corzine, U.S. Rep. Frank Pallone (D-Long Branch) gouged Christie over the Republican candidate's opposition to the public healthcare option.

"You know, the public option is opposed by the insurance companies – the same companies that gave Chris Christie's campaign $100,000," Pallone said.

Prior to Biden's appearance, "Living on a Prayer" blared through speakers.

Itvaguely had the feeling of aJon Bon Jovi ego prop after Corzine's red-faced Friday night confession that he prefers the Boss to his old pal from Sayreville. If there were any 1980's area high school graduates nursing wounds from what had sounded to them like Corzine's selection of rock-and-roll hall of famer Springsteen over their local hero, blue collar Biden was here toring the dinner gong for the county's suburban Catholics who might still not be feeling Corzine love.

"My Irish Catholic mother's 92, and she thought if she was a Republican she'd go to hell," Biden told a floor-full of backpack clad MySpace generation onlookers who showed up at the gym between classes here at Middlesex County Community College to blend in with some party types.

A few IUPAT (International Union of Painters and Allied Trades) signs danced above the crowd, and there were party regulars in attendance, including U.S. Sen. Frank Lautenberg (D-Cliffside Park) (on a guns and mammograms message), Pallone and U.S. Rep. Rush Holt (D-Hopewell Twp.). But while they control the county, Middlesex ground-game Democrats hardly project a soaring chorus of Corzine unity justdays after Biden appeared in Atlantic City in front of an excitable all-labor crowd.

The mayor of Middlesex County's largest towns, John McCormac of Woodbridge, wasnot in attendance this afternoon.

After not being consultedwhen the new regime landed in the state capital with Corzine,former state treasurer McCormac still feels dissed by the governor.

Oncea fight-the-power figurehead here in Middlesex, Choi lost his primary in June. He campaignedover the weekend for the governor, but has been mostlyunderground as his nemesis, Councilwoman Toni Ricigliano, who defeated Choi in the primary, wades into a general electionwithout his support.

"This is fabulous – so many Democrats," said Middlesex County Freeholder Carol Barrett, her voice echoing back from the cavernous nether half of the gym.

Stung byher party as she tried to position her own candidate for the 19th District Assembly seat, Perth Amboy Mayor Wilda Daiz also appeared in the crowd, which Biden worked after his speech.

"It wasn't a big crowd," admitted a Corzine ally, 'But it's mid-day. Just wait until tommorow night at Rutgers – Bill Clinton." 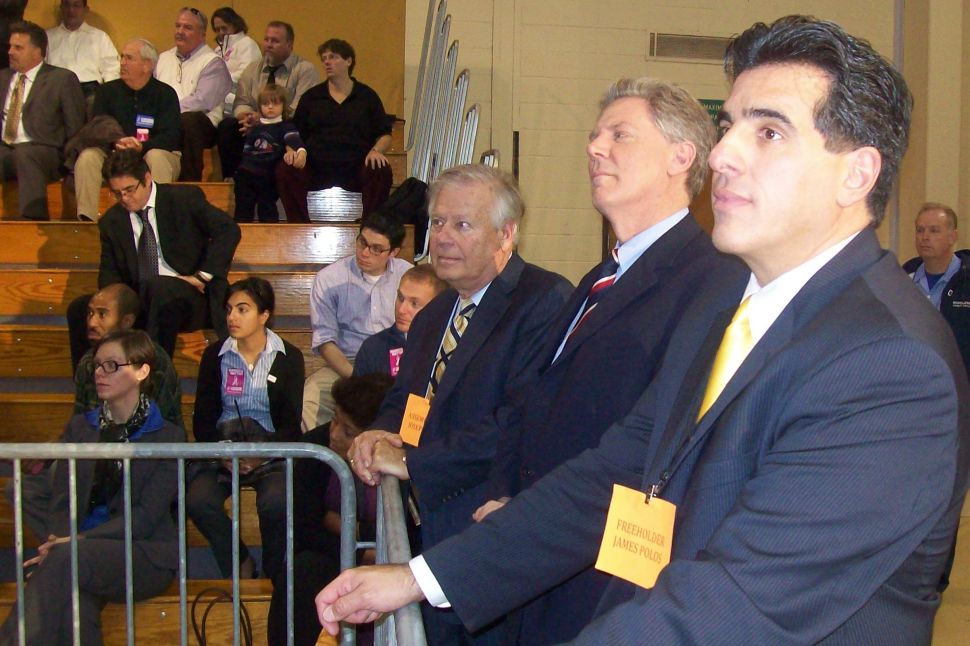