"I'm here for two reasons," said Biden. "First and foremost is to support my friend, Barack's friend, Jon Corzine. We made a decision that the first guy to whom we committed to doing anything we could do is Jon Corzine."

The other reason is to saythank you, said Biden, who laid the groundwork early in the speech for an old friends, shared values atmosphere to contrast sharply withwhat heidentified as an intentionally vague GOP in the aftermath of the Bush era.

"I'm proud to stand here today, as I have year after year for the last 37 years with New Jersey labor, campaigning with you and for you, and also, with you campaigning with me," the vice president said. "I would not be standing here today without many of you in this room. You've been my second home. You've literally had my back."

To labor chants of "Yes, we can" and a howling standing ovation, a smiling Bidenarrived out of the rain atthe BorgataCasino on the second day of atwo-daylabor conference to gin up the ground game captains for whatCorzine hopes will be GOTV dynamite.

"Today is 27 days out, and we need to have for the next four weekends, 1,200 volunteers out on weekends, that's our goal," saidAFL-CIO President Charlie Wowkanech."It's because of your efforts so far that this thing has gotten so close. …This Nov. 3rd, we are going to put our best foot and exceed the Jim McGreevey 1.2 million members on votes for Jon Corzine. That's what it's all about."

Seventylabor-backedcandidates are on the Nov. 3rd ballot, and coordinated with Corzine.At all levels of government, 551New Jersey elected officials are labor-backed.

Biden critcized Christie directly on the subject of federal stimulus dollars – $17.5 billion is dedicated to New Jersey -$2 billion of which the Republican gubernatorial challenger has said he would refuse if the money simply bulked up or created state-level programs withoutthe guarantee of apermanent federal source.

He also added his voice tothe subject that has dogged Christie's campaignovertime since last Thursday's debate – lack of specifics on budgetary matters, according to critics.

"The silence is deafening about what these guys would do," the vice president said.

"We need somebody in a position of power who has the heart toput those parents in a position where they can say to their children, 'Honey, it's going to be all right,'" Biden said. "I'm not only betting that Gov. Corzine will win, but I'm betting that years from now we'll bein the strongest economy in the world because of what we did."

Biden ran that play early in his speech, stressing the depth of a national not a New Jersey recession, and saying he understands the mood, the need for people to be mad at somebody.

"But that doesn't mean you are opposed to somebody," he pointed out to claps.

The New Jerseyans hove to that theme.

"We've experienced eight years of what George Bush has done," said Wowkanech. "The collapse of Wall Street and the banks. Joe Biden and Barack Obama haven't been in there that long, and I think they're doing a hecka job cleaning up the mess."

"We don't want to go back to trickle-down economics," Corzine told a clapping crowd.

Biden as out-of-state national allyrepeatedly invoked his backyard roots, starting with an unchallenged, "It's good to be home."

As a U.S. senator from Delaware, Biden owned a 100% approval ratingfrom the AFL-CIO andcultivated a working class hero image asa dailyAmtrak commuterto and fromWashington, D.C.,building a google biofile worthyofthe John Fogerty "Fortunate Son" buildup that blared through pre-rally speakers here, if not for the Democratic Party nomination for president, which Biden twice pursued and twice lost.

If he couldn't muster the union muscleand financial support for his 2008 presidential campaign, his household namegained down here over the course of three decades in public life throughthe Philadelphia media market madeBiden anobviousSouth Jersey Democratic Partyrecomendation last yearfor the position of vice president.

So with labor leaning on him to amplify his support for the federal Employee Free Choice Act, the Biden brand was a naturalfor this crowdat the golden tower of Absecon, strong enough toconfine to Atlantic City and the state's southern regionthe Vice President'ssecond official public appearance in support of Corzine's re-election campaign, and his third public appearance in New Jersey this year.

Corzine walked out on stage moments after Biden, built up as the governor who finally approved Paid Family Leave after a 13-year lobbbying logjam. He spoke first atthe vice president'srequest.

"The best governor this state has ever seen," said Wowkanech, who describedChristieby contrast as a candidate whose "meanness" was apparent inlast week's debate.

"I like standing with the men and women in this room better than anywhere else I could be, anyplace, anywhere," said the governor."Nobody works harder in this context to provide good jobs. …This is absolutely where it's at. …PLAs are on that ballot, prevailing wageis on the ballot, collective bargaining itself is on that ballot."

"All of those things are on the ballot, said the governor, never a back-slapping Biden type who acknowledged to the crowd that he appreciates them helping "this guy with a beard."

"It's not about the person alone, it's about those issues," said Corzine,determined to makewhat he calls shared values and not his poll-tested persona thecontest."Chris Christiedoesn't want to stand with mandates, and pre-K. He wants to turn his back onfederal dollars in this tough time."

Following the AFL-CIO rally, Biden was scheduled to fundraise for Corzine before returning to Washington, D.C., according to press reports.

"The governor was very pleased with the welcoming committee at the debate in Trenton last week and we want to duplicate that efffort at the lieutenant governor's debate at Monmouth University tomorrow night," said Wowkanech, referring to the pre-debate labor rally outside NJN studios on Stockton Street. "We're looking for a nice turnout tomorrow night."

Running for reelection in District 14, labor leader/politician DeAngelotold PolitickerNJ.comthat the tightening contest has awakened labor's campaign machinery for the duration.

"A lot of people were on the fence – some of the more conservative locals – not now," he said.

"The Vice President's visit today is a stark reminder of how Governor Corzine once againsold taxpayers down the river just three short months ago," said New Jersey Republican State Committee Chairman Jay Webber. "When last we saw the Vice President in New Jersey, Governor Corzine was writing yet another chapter in his failed tenure. Instead of fighting for fiscal responsibility and representing the best interests of New Jersey taxpayers, he gave away the store to public employee unions. Instead of taking on a serious and important negotiation with public employees, the Governor made taxpayers pick up the tab so he could avoid political embarrassment."

Christie throughout has campaign has argued that his independence from labor organizations wouldput him in a better position to negotiate on behalf of most taxpayers. 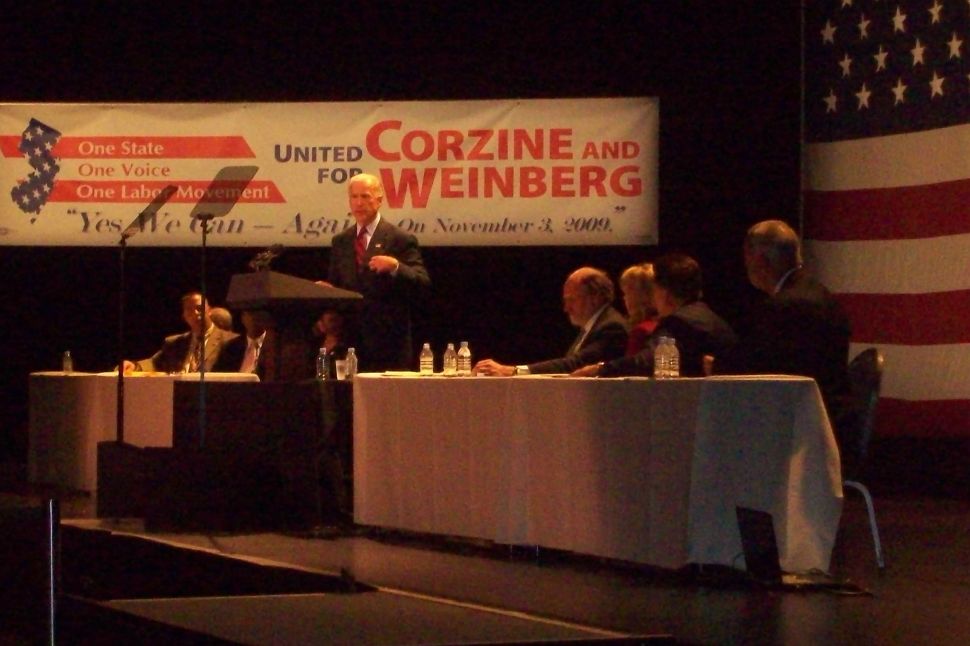