BELMAR – Appearing Wednesday night here at the Barclay in support of Democratic Gov. Jon Corzine, Caroline Kennedy reached back to 1980 when her late uncle, Sen. Edward Kennedy, campaigned for the presidency and won the Democratic Primary in New Jersey.

"I remember campaigning with Teddy in Elizabeth, Jersey City and Hoboken, and that victory you gave to him meant the most to him," said Kennedy, recalling other campaign visits throughout the years too, but dwelling on that Jersey win,when incumbent President Jimmy Carter defeated her uncle in 24 of 34 primaries but failed to turn him back here.

When Corzine mentioned how the senator, who died on August 25th after battling brain cancer, stood in the same spotin 2005to helpCorzine in his first run for the governorship, State Party Chairman Joe Cryan choked up at the memory beforethe governoradded, "Nobody looks out for Jon Corzine like this Irishman, Joe Cryan."

There was sustained applause for Cryan and the late Kennedy from this Irish-American crowd that packed the split-level bar and banquet hall a block away from the capital beach for a community hovering atnear 16% of the total population in New Jersey, for whom Caroline Kennedy remains abeloved symbol.

Corzine then invoked another Irish politicianin the room, former Gov. Brendan Byrne, who occupied the chair of honorbetween Kennedy on one side, anda stage packed with Irish-American Mayors, including Jersey City Mayor Jerramiah Healy, on the other.

"You know, from time to time I get calls from former Gov. Byrne reminding me that he won in tough times with 32-60 favorables," said Corzine.

Laughter – some it nervous – rippled through the audiencebefore Corzine prompted the biggest applause line of the night when he added, "I'm going to win this election like Brendan Byrne. We're going to do it together, because we're doing the right thing."

Byrne in his own remarks went back to the 1960 election, when New Jersey voted for Caroline Kennedy's father, John F. Kennedy, over Richard Nixon.

"We campaigned with him in Spring Lake,"recalled Byrne. "He made us a Democratic state. We have not been a loser since really. We came close – in 1977, when I was up for re-election.

"It's wonderful to see all the mayors here tonight," Byrne added, building up to his favorite joke at the expense of the Essex County native's neighbor, "especially Mayor Healy, because my desire is to be buried in Hudson County, so I can remain active in politics."

Derailed earlier this year as a prospective replacement for former New York Senator Hillary Clinton but not before the New York presssavagedher as a lightweight, Kennedy, 51,reservedly waded into this Irish Riviera crowd on the heels of an animated Corzine, who worked the tables with both hands outstretched before a bagpipe troop marched in the mayors and hastened Kennedy – and Irish American Democrats President Stella O'Leary – up to the front of the room.

"Everybody knows how important the stakes are in thiselection," said Kennedy. "You really have a chance to make history."

Although the phrasesbared scant resemblance to"Ask Not" in every regard save brevity, there was a lot of affection herefor JFK's onlydaughter, who hadresponded to a personal cellphone call from Corzine to come in to campaign for him with less than two weeks to go before he faces Republican Chris Christie on Nov. 3rd.

Mercer County Executive Brian J. Hughes carried a picture of himself, his father, former Gov. Richard Hughes, hisbrother Michael Murphy, and President John F. Kennedy. "It was taken at the Statehouse when the president came to New Jersey," said Hughes, who presented the picture to Caroline Kennedy, who signed it for Hughes's son Sullivan.

When he introduced Byrne, Assemblyman John McKeon (D-West Orange) joked that he hadthat night proposed to Caroline Kennedy, who rejected him and in so doing noted that Cryan had broached the same hopelessquestion five minutes earlier.

The Barclay all night bulged with enough nostalgia to almost make alive the party's parallels with the past.

Democratsgave ubiquitousoperative Bonne O'Flanagan door duty, along -presumably -with the command to answer any question with the old fire blanket, "The bar's over there."

The shock of white hair head and shoulders over all others belonged to Assemblyman Tom Giblin (D-Montclair), president of the Essex County AFL-CIO and a former state party chairman, who held court at the bar as that entrenchedembodiment of steely humor and hard-edged irony still prized by the oldest of old school Irish-American pols.

"Everything Irish in New Jersey revolves around this guy," said Cryan.

With his protege, Corzine Campaign Manager Maggie Moran, standing in the back of the room in this, her hometown, Giblindelivered the evening'smost impassioned war whoop for Corzine.

"We cannot win this battle alone, and I'm asking this group to get out there and act like foot-soldiers," said the labor leader.

There was a lilt in the background before the speeches- the Banshee Boys, singing something about the old country, and in-between thefast blurred edges of a note card propped on the bar were the neatly printed features of Kennedy Part II: "Please Join Gov. Jon Corzine for a Victory 2009 Campaign Rally with Congressman Patrick Kennedy, Friday, Oct. 23rd, in Paramus."

But this night, at least, belonged to Caroline Kennedy, among that next generation of Camelot offspring pursuing a new family torchbearer.

In a room of all ages, Byrne also endured.

"How do you think the governor did?" was the question directed to a random face at the bar.

"Great," came the answer, delivered with a crinkly smile.

"Do you think he'll get re-elected?"

But some of that diehard Byrne-love notwithstanding, "I'm still mad about what the Republicans did to my country," added the same guy, slicinginto apiece of corned beef and spearing some cabbage on his fork. "They still haven't paid for that yet."

"This is just a tremendous evening among all these lucky folks," said Corzine. "I want it to rub off on Nov. 3rd."

When the governor called on Healy,the mayor from Jersey City, in the throes of a federal probe of his 2009 reelection campaign, but happy tonight among his friends,sang joyfully, "Danny Boy." 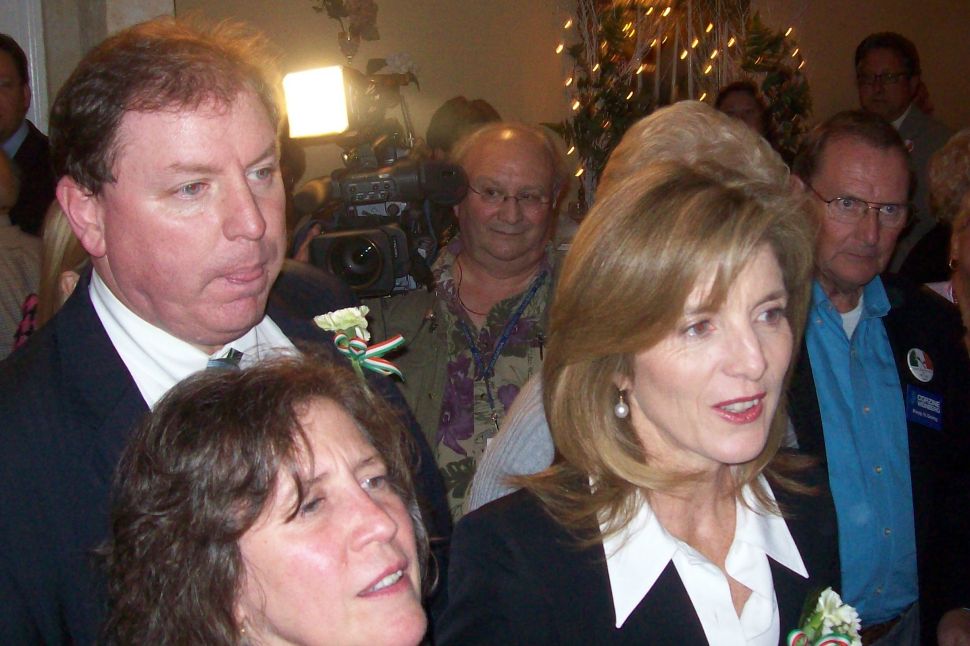