But the big difference between today’s press conference phone call and the seven years of pressers Christie held as the state’s top federal prosecutor was that he laid part of the blame for the state’s corrupt political culture on Gov. Jon Corzine.

“The Governor bears some degree of responsibility for this as well because, sadly, he gave over $400,000 of his own personal money to enable this felon to lead the Bergen County Democratic Organization— in fact to lord over the Bergen county political scene for much of the last decade.”

Included in that figure were donations from Corzine’s mother, an Illinois resident, after Corzine maxed out.

Ferriero, Christie said, had used money from Corzine and influential Democrats across the state to increase his clout not just over the BCDO, but county and local government. In effect, according to Christie, Ferriero became a “dictator” – as his conviction for a scheme to profit by using his influence to steer grant money to Bergenfield.

“I’m not saying the governor knew this was a crook. What I’m saying is the governor enabled someone who was a dictator,” he said.

But what about Corzine’s endorsement of Loretta Weinberg for state Senate in 2005– an unsafe political move that created a check to Ferriero’s power?

Christie said that his campaign will not likely mention the Ferriero conviction in any campaign advertisements.

“This is not something that I think we have to put paid media behind,” he said.

Christie said Ferriero "is a disgrace" and that his conviction "should bring great joy to the people of Bergen County and the State of New Jersey."

"For New Jersey, today's verdict is as much about Jon Corzine as Joseph Ferriero. Ferriero's conviction is a disturbing refection on Governor Corzine, who has been a significant financier of corrupt party bosses and machines, including Ferriero. Corzine and his family donated over $440,000 to accounts controlled by Ferriero and disgraced former Senator Joseph Coniglio, also convicted of corruption," said Assemblyman Jay Webber (R-Morris Plains), the GOP State Chairman. "While Governor Corzine pays lip service to ethics reform, today's conviction reminds us that, as on so many issues, Governor Corzine's record doesn't match his rhetoric."

"Today's conviction of Joe Ferriero only further shows the high standard for conduct and accountability that Chris Christie will bring to Trenton as governor," said State Sen. Joseph Kyrillos (R-Middletown), the Christie campaign chairman. "In contrast, Jon Corzine has enabled corruption by giving $441,600 to Joe Ferriero and his political operation in Bergen County. Over the last four years Governor Corzine has done nothing but give meaningless lip service when it comes to enforcing ethical standards, while he has been the number one financier of corrupt politicians and party bosses in New Jersey."

The Corzine camp, for its part, issued a general statement on the verdict.

"We believe that people who commit crimes, and those who violate the public trust, should be held responsible. We commend the jury and prosecutors for holding people responsible," said Corzine spokesman Sean Darcy. 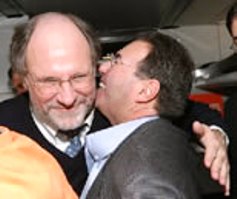