"The people who crossed the Atlantic Ocean in ships didn't come here looking for security and a welfare check, they came here seeking freedom and liberty," Lonegan told an excited crowd packing the sidewalk in front of the Hunterdon County Courthouse. "Barack Obama doesn't understand that simple message.

"Those folks had learned a lesson that Barack Obama, Nancy Pelosi and Harry Reid do not understand," Lonegan said.

A day before Obama is scheduled to appear at rallies in Camden and Newark in support of Democratic Gov. Jon Corzine, thecrowd cheered in the rain.

"Some of my friends said they were going to write Steve Lonegan in," added the former gubernatorial candidate. "But let me tell you, we have an opportunity to take back New Jersey, to make New Jersey the economic leader it once was. The best man did win. The best man will put an end to the advancement of the Corzine-Obama team."

"This is a failed governor and a failed bureaucracy in Trenton," said Christie. "We will pick them up and throw them out the front door."

"That's right," called back Christie, who promised to "return this state to the greatness it was when we grew up here."

"I have never seen the Republican Party so energized as right now,"Doherty said. "Chris Christie's going to win. There's been buzz about the Lonegan people not getting onboard but Chris and Steve are a lot closer than apart. Pro-life, pro 2nd Amendment. Chris Christie embraced what Steve Lonegan stands for. He reached out. You've got to give him credit. People not only want to be acknowledged, but welcomed and respected."

Especially when the president's independent voter favorable ratings were higher over the summer and as his campaign tried to appeal to independents and Corzine-disaffected Democrats after his primary tilt with Lonegan, Christie made a point to deliver several moderately toned shout-outs to Obama in web ads and public statements, arousing howls from the Lonegan crowd.

He also coded Obama's executive competence when he declared as recently as a week ago thatthe presidentcould come here to gin up support for Corzine yet would not be sitting in the governor's chair.

But today, Christie embraced the conservative wing of the party that closed ranks behind Lonegan's flat tax in the primary and have pleaded with Christie throughout the general to get more detailed about his plans for property tax relief.

"The great thing about the Republican Party is we are the party of ideas and in the spring, Steve Lonegan and I had a spirited campaign and a spirited competition," Christie said of the man who during the primary groused that Christie ran from him rather than engage regularly in ideological combat.

"After the election, we met forlunch, a lunch he himself made for me, and we have been talking ever since," Christie added."There are very few people you'd rather have in a foxhole with you than Steve Lonegan."

A lot of the people on the sidewalk in front of this courthouse and on the porch of the Union Hotel on the other side of Main Street were hardcoreDoherty backers and by extension, Lonegan people.

In a Bruce Springsteen-infused show of unity, there was a lot of Christie love projected from under the umbrellas that crowded one another in this heavily Republican county whereClerkMary H. Melfisays vote by mail submissions this yearso far number 3,800 compared to 1,700in 2005.

"If I have circles under my eyes it's because I've been reading the 2,000-page bill that we are not going to vote for," Lance said of the Democrats' healthcare reform legislation. "Hunterdon County will deliver the state's biggest plurality to Chris Christie."

"Jon Corzine is a tax and spend liberal who doesn't support the bear hunt," Doherty shouted in his build-up to Christie-Lonegan. "You know what Gov. Christie's answer to the bear issue is?"

"Shoot 'em!" yelled a voice in the crowd.

"We're going to have a ear hunt in New Jersey!" Doherty shouted to sustained cheers. 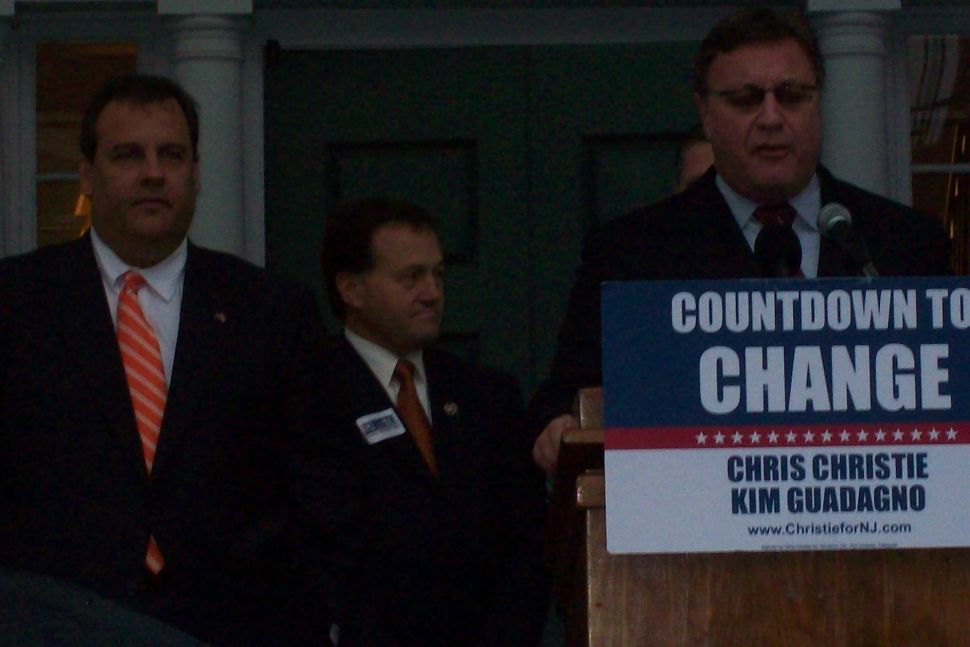