That was the double barrel message from GOP gubernatorial candidate Chris Christie this afternoon when he addressed an approvingcrowd of senior citizens in this Bergen County blue collar rivertown where registeredDemocrats outnumber Republicans 3-1.

"New Jersey has the highest unemployment and the highest property taxes in America," said Christie, who's challenging incumbent Democratic Gov. Jon Corzine in a dead heat race with three weeks until Election Day.

"The governor said if he's re-elected he'llraise income taxes," said Christie, the former U.S. Attorney."In this election, there's a clear choice: Gov. Corzine will raise your taxes and increase spending – and take your money doing it."

He also chastised Corzine for musing about a gas tax hike.

When asked after his speech about invoking the income tax in aroomful of middle class seniors – which Corzine has said he wouldconsider hiking only on the wealthiest New Jerseyans – Christie said Corzine's tax increaseshave saddled the same small business owners who would receive reliefthrough Christie's proposedbusiness and corporate tax cuts.

"Unless I'm mistaken, this is one of the most difficult places in America to make aliving, and you know, I have a moving business," said the mayor.

Christie also made sure to throw an elbow up in the way of independent candidate Chris Daggett, who over the weekend received the Star-Ledger's endorsement for governor.

"Those two guys will raise taxes," Christie said, referring to both Corzine and Daggett. "I say tax less and spend less. We're 50th in America in business tax climate. Do you realize that 450,000 people, according to Rutgers last week,left New Jersey during the McGreevey and Corzine administrations. People can't afford to live here anymore." We're going to put a stop to it and give you more money back.""

The Corzine Administration argues in the face of Christie's entreaties to a beleaguered senior population that the governor expandedeligibility for the state senior freeze program up to the $80,000 income level, "allowing an additional 70,000 seniors and disabled residents to receive state property tax relief, above and beyond the standard Homestead Rebate program."

“Chris Christie can talk all he wants about tax relief," put in Assemblyman John Wisniewski (D-Sayreville), a Corzine ally,"but he would target it to the very wealthy and big corporations at the expense of New Jersey’s middle class."

The Democratevenquoted the Star-Ledger, which just dissed Christie and Corzine but whose endorsement of third party performer Daggett ultimately benefits Corzine, according to both Democrats and Republicans.

“While Christie has chosen to try to deceive voters in recent appearances, he hasn’t changed his mind, he’s only changed his tactics," Wisniewski said."Given that the Star-Ledger called Christie’s tax plans ‘impossible’ and said they would raise property taxes across New Jersey, it’s not a surprise. Christie continues to show that he is wrong when it matters most to New Jersey."

Any number of Corzine campaign attack ads – Youtube and television – depict Christie in blow-up slo-mo, the latest amplifying the Republican candidate's $100,000 campaign rake-in from the insurance industry, while simultaneously advocating the jettisoning of mammogram mandates for women.

Christie said his opponent is simply running away from a record of failure.

"He's run a $19 million attack ad campaign against me," said the GOP candidate. "That's why he didn't show up at the Gannett editorial board today, because he's hiding from his record, and we will continue to drag him into the sunshine and out of the gutter.

"I feel better now than over the summer when I had a bigger lead," Christie added. "I knew the governor was going to spend a lot of money going after me, attacking me. And as much ashe has, I should be dead by now, but hereI am – still with a lead, andI feel better now thanI have felt this entire race."

Building up the crowd before the main act spoke was Councilwoman Tana Raymond, a Democrat who's voting for Christie instead of Corzine.

"I am ashamed in this election to say I'm a Democrat," Raymond told the crowd."These ads – they're a desperate attempt because they (the Corzine campaign) know they're in for a fight. ARe you better off than you were four years ago?"

"No," the crowd roared back. 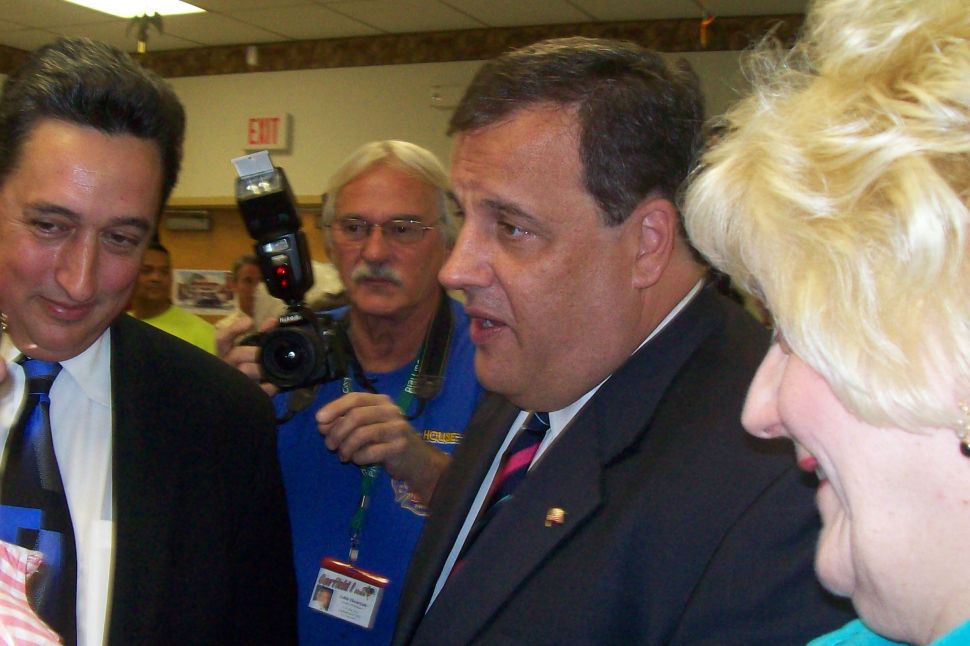