Trying to succeed retiring Assembly Speaker Joe Roberts (D-Camden) as the face of South Jersey leadership in Trenton, Sweeney hasenough (14 of 23)votes in the Democratic caucus toextract Codey from therostrum roostCodey has owned for six years.But Codey still hopes to build cross-the-aisle support in the Republican caucus to block his South Jersey rival and hold onto the senate presidency.

"Who's the Speaker of the House?"

"Nancy Pelosi," was the answer.

A mind blurred over with Jersey political personages failed to immediately dredge the name of Sen. Majority Leader Harry Reid (D-Nevada), but Codey made his point anyway.

"They're both from the western part of the country," he said. "I rest my case. Why would leadership be decided by geography? It should be the best people."

Corzinedelivered a"let's go get 'em" speech to the crowd, worked the tables and was out of there, leaving Codey and Girgenti to dine at a table with Paterson Mayor Jose "Joey" Torres, state Sen. Robert Gordon (D-Paramus) (who's also committed to Codey), Assemblywoman Nellie Pou (D-Paterson), and Assemblywoman Elease Evans (D-Paterson).

"We've known each other for 30 years," Girgenti said of Codey. "We're close friends. I think he's done a great job and I'm going to stand by him."

Girgenti said Sweeney's allies haven't tried to peel him away from Codey to add to their numbers.

"No, they've known from the beginning that I'm with Dick Codey," Girgenti said.

Moments later, Codey jumped up on the stage and gave a defiant speech, which prompted some hand claps and several chair push backs of support in the crammed banquet hall.

"If there's a bully on the playground, stand up to him," said the embattled Democratic senator, an acknowledgement of his refusal to back down against the alignment of North and south Jersey allies who allied to strategize his overthrow, including powerful South Jersey Democratic Leader George Norcross III.

"Damn right,"" screamed a voice in the audience.

"They told me back in 1993 not to back a young mayor who was in trouble – Cardell Cooper of East Orange, but I did, because it was the right thing to do, and they came after me, they threw me off the line," Codey said. "They said I couldn't win. They said, 'You're off the line, you're through.'"

He assembled a team, including Nia Gill and Leroy Jones as Assembly candidates – and Sheila Oliver for freeholder-at-large, andCodey won.

In the crowd, "The guy's beautiful – the best," said legendary boxing trainer Lou Duva, before goingup to Codey at the head table.

"Who was the last good Irish fighter you had, Lou?" someone cried as Duva and Codey embraced.

Duva didn't have a ready answer.

"There was that guy who had the three bouts with Gatti," said Codey. "What was his name Micky Ward – 'Irish" Mickey Ward. He couldn't fight, but he had this."

Codey pulled back his jacket and pointed to his heart. 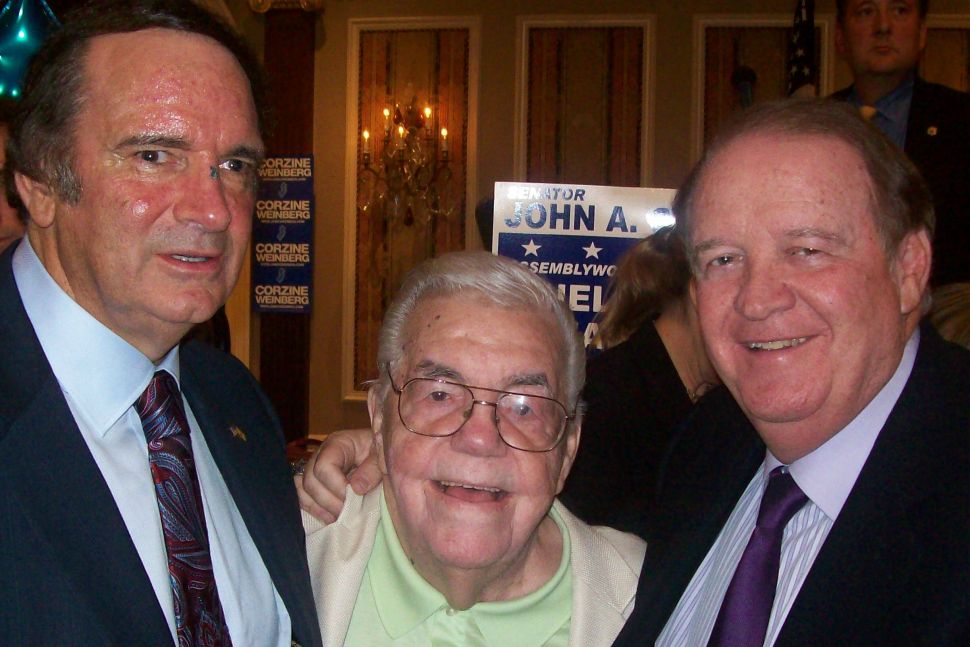