Joann Lee, a professor of communications at William Paterson University, will replace the Star-Ledger's Tom Moran as a panelist for Friday's gubernatorial debate. The Star-Ledger dropped their sponsorship after their endorsement of a candidate for Governor on Sunday. State regulations prohibit debate sponsors from endorsing any candidate until after the debate is completed.

The addition of Lee to the debate panel potentially offers an interesting dynamic to a campaign that has seen coverage of the cost of mammograms emerge as a major issue: in 2003, Lee resigned as the journalism dean at the University of Nevada, Reno after being diagnosed with breast cancer. Her cancer was discovered early during a routine mammography. She had a partial mastectomy a month after taking her new job, and returned to the New York area eleven months later to be closer to her family following complications from the radiation treatments she undertook in Nevada . She joined William Paterson in 2007.

Prior to her career in education, Lee was CNN's first New York correspondent. She also worked as a reporter for ABC and CBS local affiliates in Sacramento, Chicago and Philadelphia. She chairs the William Paterson University Communications Department. 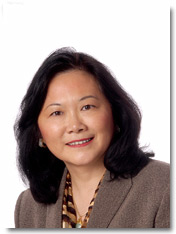