HARRISON – Shoved into the swamps of Hudson and for years all but forgotten except to post-industrial artifact watchers on passing trains, disgruntled people whose cars got towed from Newark to the impound lots,and the clutch of blue collar workers who live between bridges, Harrison welcomed Gov. Jon Corzine tonight to the Polish National Hall.

He offered an explanation.

Referring to the disparity between Democrats and Republicans in the town (2,835 to 276), Sacco told the cheering crowd, “You know, I’ve always said the best organization is in Harrison, which continually turns out the largest plurality of Democrats in the state.”

Kaine paid tribute to McDonough when he took the microphone and said, “I was the mayor of Richmond, Virginia. I often say, being a mayor is kind of like being a fire hydrant. They need you in an emergency and sometimes they need you for more prosaic purposes.”

The one-term governor of Virginia before getting term-limited out of office at the end of this year, the DNC chairman jokingly said he’ll miss being called “your excellency,” the title Virginians bestow on their governors.

Moments later, Corzine, his voice gravelly, told Kaine, “They don’t call governors here ‘your excellency.’ I won’t tell you what they call them, because I see Monsignor Gilchrist over there, he might get offended.”

Branded an uninspiring speaker who needs Obama’s oratory to close the deal, the governor added -and the crowd boosted him with appreciative applause -“Candidates aren’t inspiring. The people are inspiring. I will miss the joy of meeting people in the context of this campaign.”

With the big room already enlivened and union members roaring pro-Corzine slogans, the governor then promised to set the rate of property tax growth at zero in the next term – an announcement that sent his staffers into high bore BlackBerry mode amid the clapping.

Still, the question about his decision to campaign in Harrison came in bewilderment as sources say Jersey City -whose registered Democratic voters outnumber Harrison’s, 51,468 to 2,835 -projects no great urgency for Corzine in the aftermath of federal summertime busts that depleted political infrastructure, notwithstanding Healy’s assurance tonight that his town will be solid for the governor.

McDonough offered his own take.

“The governor helped us with redevelopment – the largest redevelopment project in the State of New Jersey,” explained the 15-yearmayor, whose predecessor, Frank Rodgers, was mayor of Harrison for 48 years.

“We had our redevelopment projects for all our old industrial sites, and before the northeast dried up, we had a lot of sites here – 100,000 people used to come to Harrison to work everyday, at the old RCA factory, the Otis Elevator plant, etc,”said McDonough, who grew up when the town was a gritty cross-section of Irish, Italians and Polish. Bigger numbers of Latinos and Asians blend into that mix now.

“So we wanted to redevelop, and then 9/11 happened, and that stalled up five or six years – then we hit the recession,” McDonough said. “But we’re into it now – 270 acres and the Red Bulls Stadium (the country’s largest soccer stadium) and a parking garage and that’s where we had a $9 million budget hole that the governor’s office, working in conjunction with DeGise, through the Improvement Authority, helped us fill. So we’re very grateful and want to see him re-elected.” 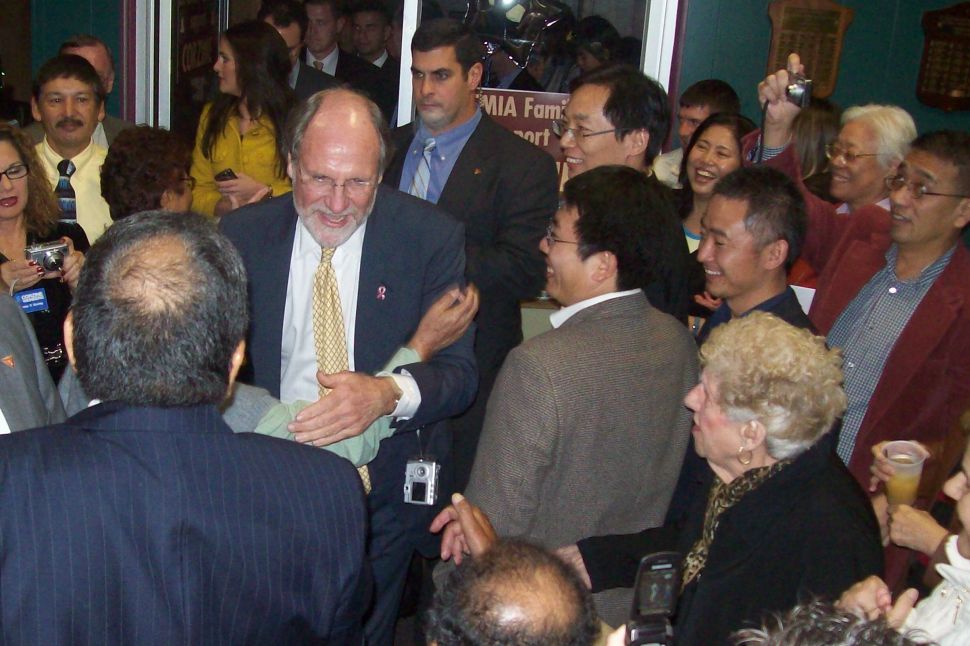