The Courier-Post today endorsed South Jersey AFL-CIO President Donald Norcross for State Assembly in the fifth district, saying that Norcross is well versed on state issues and "would be able to hit the ground running in Trenton" even though he'll be a freshman.

But the Gloucester County Times declined to back Norcross, instead supporting Fuentes and Republican Stepfanie Velez-Gentry, who has attracted national attention because she owns a company that sells sex toys to women

Norcross, the Camden County Democratic Co-Chairman and the brother of Democratic leader George Norcross, set a record this month for the single biggest fundraising event for a first-time candidate: he raised a reported $350,000.

"Norcross has been a union leader, yet he understands that things cannot be the same for future government workers as they have been and are for current ones in terms of pay and benefits. He sees that Trenton can't afford to keep handing out fat pensions and loads of other expensive benefits and remain solvent," the editorial said. "While Norcross and Fuentes likely won't be as independent from party-line politics as we'd like, in this race, they're clearly the best choices."

Norcross, according to the Courier-Post, would not deny that he'll quickly move up to the Senate after State Sen. Dana Redd (D-Camden) wins her race for Mayor of Camden.

The Courier-Post said that Velez-Gentry, "isn't very well versed on the issues facing the state. She's just not at all ready for an Assembly seat." The other GOP candidate, Brian Kluchnick, did not respond to requests to meet with the Courier-Post editorial staff. The Gloucester County Times also said that Kluchnik is missing in action.

The Gloucester County Times said Velez-Genrty has "credible ideas about how to make the other flagging downtowns, like Woodbury and Gloucester City, more like Collingswood, where she grew up," but noted that she's a little fuzzy about how much in resources she'd direct away from places like Camden to beef up the ‘burbs', but is staunchly in favor of consolidation of school districts and the like to save everyone money. If she can convince parents in her peer group (and the Legislature) of that, she's worth sending to Trenton." 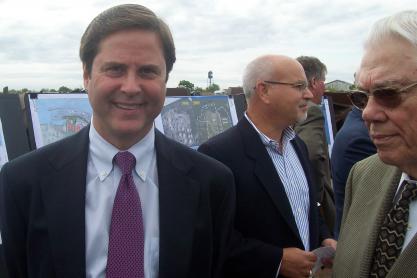