NEWARK – After months of mostly unobservable underground movements and five days in front of President Barack Obama's appearance at the Rock, there isevidence ofeffort on behalf of Gov. Jon Corzinein a city the governor needs to win amply in order to land another four years in office.

By comparison, Obamapunished Republican Sen. John McCain in Newark by a vote of 77,112 to 5,957 last year,as hecarried Essex County, 240,127 to 73,975, recording a larger number of votes here than in any other county onhis way towinningNew Jersey bya 15% margin.

"Certainly for Obama, people had aclear and distinguishable reason for coming out," says Essex County Democratic Party chairman Phil Thigpen."Now, it'snot as visible when you talk about quality of education or property taxes and you're a renter, for example. So we've got to jazz it up."

If the Obama event in Essex is big for Corzine in the eyes of on-the-ground organizers,so too is the machinery from below: the local and district coordination, and that's also in evidence on Thursday.

Jones steps into a zone of close-quarters campaign activity supervised by Assemblyman Albert Coutinho (D-Newark).
.
"You can see the energy in the room, and it's not atypical," hesays. "We've knocked on 100,000 doors and we will have 1,700 people in the street on Election Day in Essex County."

As he talks, Coutinho's team of eight or nine campaign workers continues to fold copies of the East Ward rep's letter to 10,000 voters andglossy palm cards into envelopes.

The letter features Coutinho's picture and an enthusiasticplug for the governor.

"While cutting the size and budget of state government two years in a row, and eliminating 8,400 state jobs in the process, we still managed to increase funding to education," writes the assemblymanin search ofa second two-year term in Trenton."I was proud to lead the effort, with the governor, to provide $3.9 billion to build 53 new schools throughout the state, including the first two – Oliver Street andSouth Street schools – in the Ironbound in over 100 years. His respect for our community on thisissue alone should get our vote."

"I'm excited about what Essex means, because a banner result for us means that the result on Election Day certainly won't mirror the polls (which show a virtual dead heat between Corzine and Republican challenger Chris Christie," says Jones.

"Not to mention the fact that we're going to get a big boost from President Obama," he adds with a smile, referring to the President's rally at the Prudential Center on Sunday for Corzine.

"He's going to be right here in the belly of the beast and it's clearly going to energize the base," says the East Orange political animal. "That's where the Republican Party has underestimated this whole thing: with the surge voters we're going to get from Obama. That's going to spark a real uptick in turnout."

On the other side of the city, in the West Ward, state Sen. Ronald Rice (D-Newark) doesn't agree.

He likes Jones and feels the county coordinator is doing a good job, but otherwise the veteran senator questions a Corzine campaign strategy that refused early to rely heavily on surrogates to sell an unpopular governor, and bewails a decision by party bosses – enacted in the mist of a gubernatorial campaign – to dethrone his friend and ally, Senate President Richard Codey (D-Roseland).

"The campaign's looking better," admits Rice. "But it's still not looking good. There are not a lot of things happening. Obama, yeah, I know, and no, I won't be there. The point is, people are getting killed here and you don't read Cory's comments in the paper anymore And Corzine – at all of his campaign events – is hugging Cory. You follow me? It's Corzine and Cory, and that gives the antis incentive to say, 'Aw, to heck with the governor's race and those guys, man, I'm staying home.'

"I'm out there canvassing (for Corzine)," adds the senator, who lost the 2006 mayoral election to Booker. "I'll be out there in the West Ward tomorrow with 120 bodies. But I still don't sense the energy for the governor. I was at the event for Corzine the other night with former President Bill Clinton. Great energy for Clinton. Bad energy for Corzine."

While critical of the campaign, Ricesoftened his outright criticism ofthe incumbentafterthe governor issued an executive order – on the senator's recomendation – guaranteeinggreater participation byof minorities and women in federal stimulus-assisted programs and jobs.

Butthe Booker factor months in front of his reelection bid next year, coupled with initial Democratic Party worries about the Central Ward when party mechanic Central Ward Chairman Dwight Brown died this past summer, don't add up to much for Thigpen.

"Remember, Congressman Donald Payne (D-Newark) can bring another degree of enthusiasm in the city, and he's going to be in the streets for Gov. Corzine," says the county chairman. "Look, we've knocked on 100,000 doors andmade contactwith 25,000 of those people, and you can see the trend for the first time moving heavily in on our direction."

"You're going to have 15,000 labor members out in the streets on Election Day," said Sowell, "and you figure, many of them will be in Essex because it's so densely populated here. Now, that's labor members and their families getting out to vote.

"Thisa concerted effort, just as in a time of war there's Army, Navy, Air Force and Marines all coordinated," added the veteran council president."Labor has a proven ability to deliver."

Coutinho, directing a pizza delivery man into the rear room of headquarters, tells his workers to take a break and eat, but they keep working.

"We're going to have mail Friday, Saturday and Monday, then phone-banking," says the assemblyman. "I don't think I'm going to go see Obama. I'll be in here, making phone calls starting at 9 a.m." 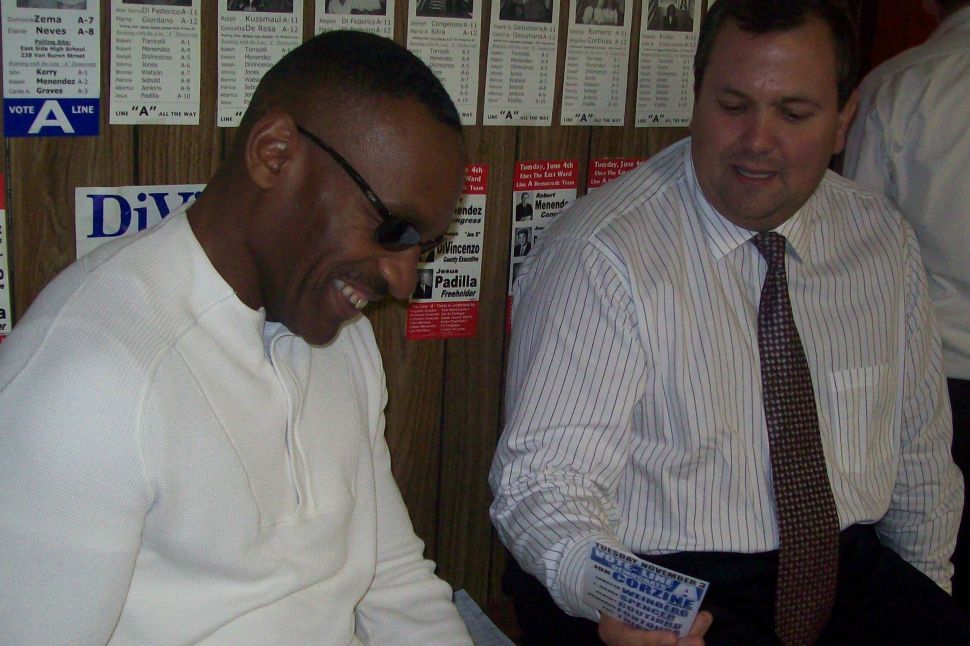