HOBOKEN – Tired of sending their mayors here in front of judges, the voters should simply save a lot of people -40,500, or roughly the population of Hoboken -a lot oftrouble and heartache and simply make a judge mayor, or at least that's what the backers of Kimberly Glatt believe.

Zimmer doesn't impress Glatt, who served in her nativecity of Hoboken for 14 years before retiring just before the September deadline to run for mayor.

"I had a chance to work in City Hall for six weeks under this mayor, and I don't sense any focus – from the top down," said Glatt. "An example? I spent 14 years creating a security plan for the city, and without even asking me about it, it was undone."

Alert to the challenges inherent inher11th hour start, Glatt promisesfour weeks of pedal-to-the-metal campaigning. She's on TV and plans aggressive door-to-door retail. But part of the problem for her,3rd Ward diehard Frank "Pupie" Raia, and 2nd Ward Councilwoman Beth Mason – all candidates in the special election – is that the incumbent, Zimmer,nurtures a dedicated base of reform voters:a core of 6,000 who have loyally voted for Zimmer, betweenher council and mayoral races and the runoffs,five times in two years.

As born-and-raised candidates, Glatt and Raia are in a tug-of-war for the same base of support, while Mason searchesfor a new template following her May meltdown in the race against Zimmer and Cammarano, both of whom went to the runoff, which the latter won.

Of Raia, "we've had conversations, but he feels it's his time, and I feel it's my time," said the retired judge, first appointed to the bench by former Mayor Anthony Russo, as she shook thehands of passersby on Washington Street Tuesday evening in front of campaign HQ.

Of course,Glatt doesn't want to be characterized as simply "a born-and-raised candidate" in this town thatclings to its parochial traditionsbutwhich neverthelesshas also absorbed waves of new residents.

"I think the city's been battered and it's time for some positive leadership," said the mother of an 18-year old son and 15-year old daughter. "I don't think the in-fighting on the city council is helpful."

It's a criticism aimed in part at Zimmer, who continues to serve Hoboken as council president in addition to fulfilling her duties as acting mayor.

But it also tags Mason in the same blow.

"Their job is to put forward a budget," said Glatt. "If I had been on the council at that time,in this goes for the budget before this last one, too, that resulted in the state takeover, I would have found a way to come to an agreement on that budget and passed a budget for the taxpayers of Hoboken." 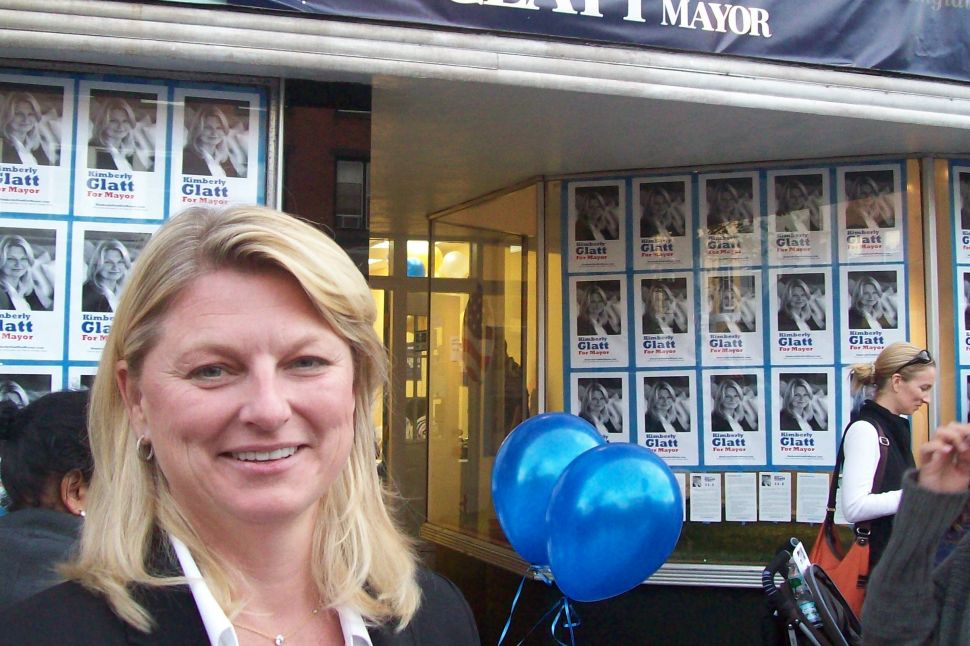