"Corzine will be fine," said the Jersey City mayor, refusing to go into detail. "I think he wins the election by two points."

In addition, operatives are confident that amayoral race in Hoboken will drive numbers up in that overwhelmingly Democratic town and help the incumbent governor.

But broken local infrastructure in South Hudson (Jersey City and Bayonne), owing to summertime corruption busts; and political standoffs taking the heart out of intraparty rivalry mere months after local elections in Jersey City, dog the party, despite county coordinator Jason O'Donnell's best attempts to revitalize those towns for the governor and despite Obama hoopla.

In 2005, ina good year, Corzine landed32,062votes in Jersey City. For a sense of Barack Obama's strength in the same town, compare his numbers last year:65,780 votes.

With the exception ofHoboken, where Corzine received 7,935 votes and Obama in 2008 won 17,051, the disparities between Corzine's 2005 numbers and Obama's2008 showing in North Hudson are, as withthe numbers in Bayonne,obvious but not overwhelming. In North Bergen, Corzine received 10,267 votes, while Obama netted 14,791. Comparably in Union City, Corzine received 9,385and Obama won 13,657.

Now, the fact that Stack in Union City and Sacco in North Bergen fell into separate camps during the Senate Presidency fight andSacco, who has 20 years on Stack, ended up in what appears to be the losing camp, means the veteran senator/mayor is motivated to show his machine strength.

And so is Stack, as he tries todemonstrate that he's capable of generating more turnout inDistrict 33 than Sacco is in 32, and politically the man to move through in Hudson County.

Additionally, Stack continues to war with West New York Mayor Sal Vega, and anticipates demolishing his longtime nemesis next year in a special election with the help of U.S. Rep. Albio Sires (D-West New York). The governor's race is a test drive for thatduopoly's Vega take-down.

All is not mechanized to work in Corzine's favor in North Hudson, however, as Secaucus Mayor Dennis Elwell's political demise owing to corruption charges weakens local Democrats, who aren't running a mayoral candidate this year.

"I predict that Jon Corzine will get 2,500 votes out of Harrison," said the mayor,or close to what Obama did last year: 2,347. Corzine, for the record, won 1,614votes in Harrison four years ago.

Putting their most enthusiastic spin on the circumstances of Corzine's re-election bid, Democrats use the Obama 2.0 model to argue thatCorzinewith heavy linkage to the president,including a cross-the-river visit on Sunday from Obama to add real-life heft to urban billboards featuring Obama and Corzine together, may even be able to improve on his showing in Hudson four years ago.

And be the major motivator in Jersey City.

But outside of the self-driven theaters of localwar in North Hudson,the game in this storied Democratic Party county appears tolack lower-level linkages to strengthen arguments for substantial Corzine turnout. 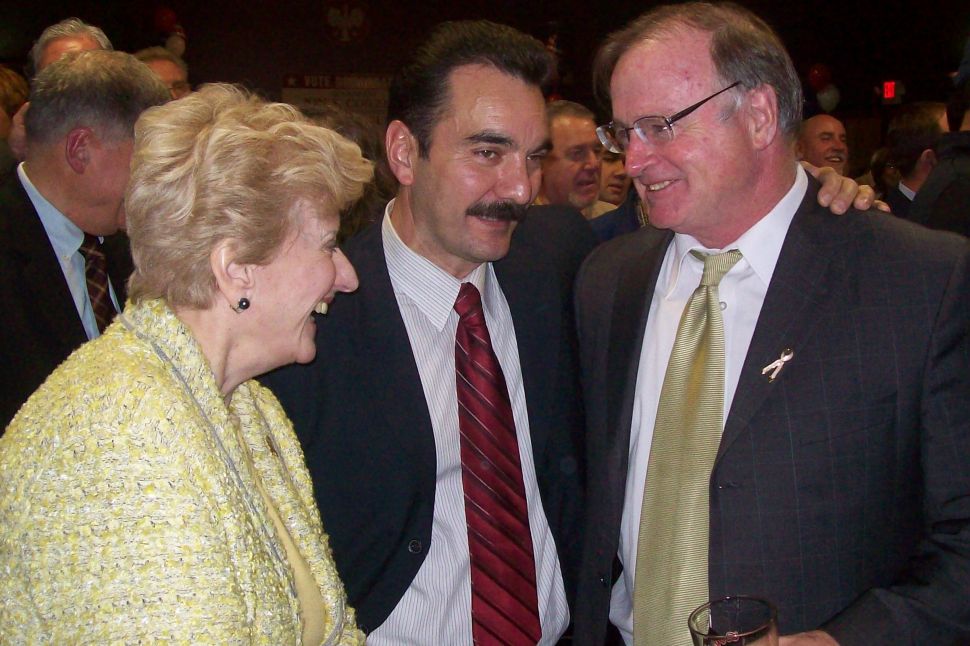