After participating in a morning caucus meeting in Trenton, Senate Republicans announced today that they have unanimously voted to support Sen. Minority Leader Tom Kean (R-Westfield) for senate president.

"People are looking for change in Trenton, and our caucus is united and determined to provide real alternatives to the governor's failed policies that will create jobs and make our state more affordable for everyone," Kean said in a release, thanking his 16 fellow caucus members for their support.

"We have 17," said Kean."We have the most votes for senate president of any of the contenders, andour goal as a caucus is to get across the finish line."

The question now is where the eight (state Sen. Loretta Weinberg, a candidate for LG, is staying out of the fracas) supporters of sitting Senate President Richard Codey (D-Roseland) will go: to the member oftheir own party who built a coalition to force their champion from power, or across the aisle to support a Republican.

Kean's position of negotiating with the wounded leader of the opposition party isdeja vu all over again for the GOP scion.

In exchange for delivering the votes to turn leadership over to Kean and the minority party, Friedlandsecured 50% control of committee chairmanships, 50% control of the money in the lower house, a conference committee that had the power to remove any bill from committee, and a generous North Jersey aid package for Essex and Hudson counties.

Friedland delivered four Democratic votes to propel Kean past Assemblyman HowardWoodson (D-Trenton), which is the samenumber Codey would needif he decides to back Kean: himself and three other Democrats, to get Kean to 21 votes in the 40-member governing body.

"This has never been a fight between Sweeney and Codey," said Rice. "It's aboutwannabe George Norcross (powerful boss of the South Jersey Democratic Organization, insuranceCEOand a Sweeney backer), the same guy who when he couldn't get what he wanted, walked into a senate caucus room and pushed (then-Senate President) John Bennett.

"Istand with Codey on this," Rice added. "Everybody's afraid of George but Codey maintains his independence from party bosses, andeverybody knows it."

Asked if he would considercrossing the aisle to vote for Kean, Rice said, "My support is for Dick Codey. Tom Kean's fatherwas good to Newark, and good for the state. He brought a reasonable degree of fairness, andwe're good friends, our sons went to school together. Ithink Tom is a fine young man, butI'm a Democrat andI stand behind Dick Codeyat this point in time, and I believe Republicans should stand behind Dick Codey as well, for the good of the state."

Presumably both sides of the Democratic caucus – Codey and Sweeney – will attempt to negotiate with Kean, but if coveted committee chairmanships are in play as an enticement toa Republican Party relegated to minority status for nearly a decade, Codey will have an edge there.

Sources say some of the Democratic senators who supported Sweeney for Senate President did sowith the understanding that they would receive chairmanships.

"New Jerseyis such astrong party organization state thatDemocrats who broker a deal like that may find themselves antagonizing their own supporters," said Dworkin."Dick Codeyis one of the most gifted politicians the state has seen in this generation. Heis too much of a talent and has too much street smarts and general political smarts to antagonize his own party by saying, 'I'm going to take my toys and go home.' He's so popular but that kind of strategy may lose him a lot of his popularity." 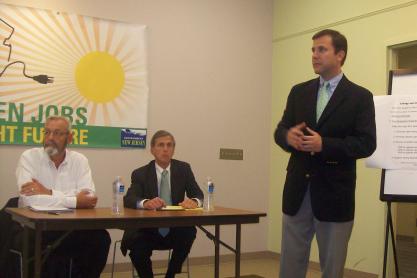