WAYNE – Bruce Springsteen won the debate tonight over Jon Bon Jovi, in one question at least – and Frank Sinatra wasn't on the ballot.

But on a hill above Paterson, ie. Wayne, in the second and last televisionbang-up of the season, the gubernatorial candidates triedto put their own individual exclamation points on a three-waycontest, with Gov. Jon Corzine arguing progressive leadership intough times,and GOP challenger Chris Christie arguing thatonly throughtougher leadership can New Jerseyprogress.

Thedead-heat contest between Corzine and Christie again created an opportunity for independent candidate Chris Daggett to make an up-the-middlestatement here with less than three weeks to go before Election Day at this debatesponsored by William Paterson University, The Record, WWOR-TV, WTXF-TV, and Fox News.

Describing a failed plan from Democrats and no plan from Republicans and denouncingtwo party organizations he charged withillegally funneling money into Washington, D.C. party funds that are then being redirected into negative advertising, Daggett said, "It's time to vote for someone not against someone, for someone who will cut taxes, reform education and protect the environment."

"We've dealt with $22 billion deficits, thereality is we've inherited a mess," said Corzine, who described a combination approach to reducing a projected $8 billion next year, including $2 billion in savings from state pension fund,ahiring freeze resulting in half a billion, other consolidations and reducing expenditures 5%.

"For those of us who lived here all our lives, we know we are on aperilouscourse with the highestunemployment in33 years," said Christie, who promised if electedto cut taxes and tackle thestate's property tax problems in part by seekinggreater concessions from state workers in collective bargaining. "The candidates to my left have a revenue problem, andI believe we have a spending and debt problem."

"First of all, tax breaks to the insurance (industry) and wealthy will stretch it (the state budget) out to $9billion that has to be closed," said the governor. "You can't do that and give that tax relief."

Daggett doubled down on Christie.

"I've got to buy you a calculator, Mr. Christie, because your numbers don't add up, they never add up," he said.

Heading into the debate, part of the talkfocused onDaggett and how Christie should handle him.The Republicanneeded toget an elbow in there, but do it gingerly enough not to get caught in a second tier scrap with the man his allies grumble is little more than a spoiler.If his destination is the governor's chair and unseating the man in it, hecouldn't get bogged down.

Alert to Daggett's double-digit poll numbers, the Republican Governors Association (RGA) started a television ad campaign against the independent this week to reinforce the argument Christie'smadeever since Daggett released his property tax plan: both Corzine and Daggettwill raise your taxes.

Now the risk for Daggett was getting pulled into a dogfight with Christie.

If he went toe-to-toe with the Republican all evening he – and Christie, for that matter – risked making Corzine looklike the statesman, whosechallengers could only absorb themselves ultimately in their ownrivalry.

"Well, I got to get you a dictionary, Mr. Daggett, because you're offering a $4 billion dollar tax increase and call it a tax cut," said the former U.S. Attorney, reiterating hiscriticism ofDaggett's proposal to expand the services he would tax in place of revenue currently obtained through property taxes.

Notwithstanding this, their first confrontation early in the evening, the two challengers ultimately mixed it up with Corzine enough toavoid consigment to their own struggle.

He had todefend himself and go afterChristiesufficiently toback up theads laying down a constant barrage.But if he looked like Daggett's tag team mate beating up on Christie, he would tread dangerously close to John Edwards, for example, clinging to Barack Obama in their post Iowa debate with Hillary Clinton.Corzine couldn't be party to a mugging without appearing opportunistically irritating.

Such a gang-uphad the potential to make Christie look bullied, and, following on the Democrats' "throwing his weight around" rhetoric, which some observers believed was a mistaken Corzine campaign strategy, a sympathetic figure.

Corzine poked at Christie again over his budget numbers,upbraiding him forpromising a restoration ofproperty tax rebates while simultaneously pledging tax cuts, which Corzine said would inflate the budget gap to $10 billion.

Daggett again went for the two for one.

"My definition of rebates is money Democrats andRepublicansshouldn't have taken from you in the first place," said the independent, vowing to secure a hard cap on localstatewide spending.

He then went after Corzine in handling a question about the governor's failed attempt to monetize the state's highways.

"It was not smart policy to think about selling the Turnpike or Parkway," Daggett said.

"I planned toomuch, too fastin the context of the recession problems," conceded Corzine, who later took a further peppering from Daggett,when the independentsaid Corzine has perpetuated aslipshodapproach to shared services and consolidation.

Corzine zapped Christie for awarding no-bid contracts. He didn't use the A-word: Ashcroft.

Christie bashed Corzine's campaign for making an issue of his weight.

"Thelast number of months, there's beenwhispering, andin case you haven't noticed, I'm slightly overweight," said the Republican."It's been a great cause of discussion, andI am, I've struggled with my weight for a good part of my life, as I'm sure many of those in the audiance have.We all know what he and his staff have been doing. I'm waiting to get off that subject and onto another one. We all know what the governor's campaign is about: character assasination."

During a lightning round of questioning, moderator Harry Martin wanted to know if the candidates preferred Jersey Shores or Jersey Farms.

"I was born on a farm and I wanted to go to the shore, so shore," said Corzine.

"You said one word?" Christie asked Martin, who nodded back. 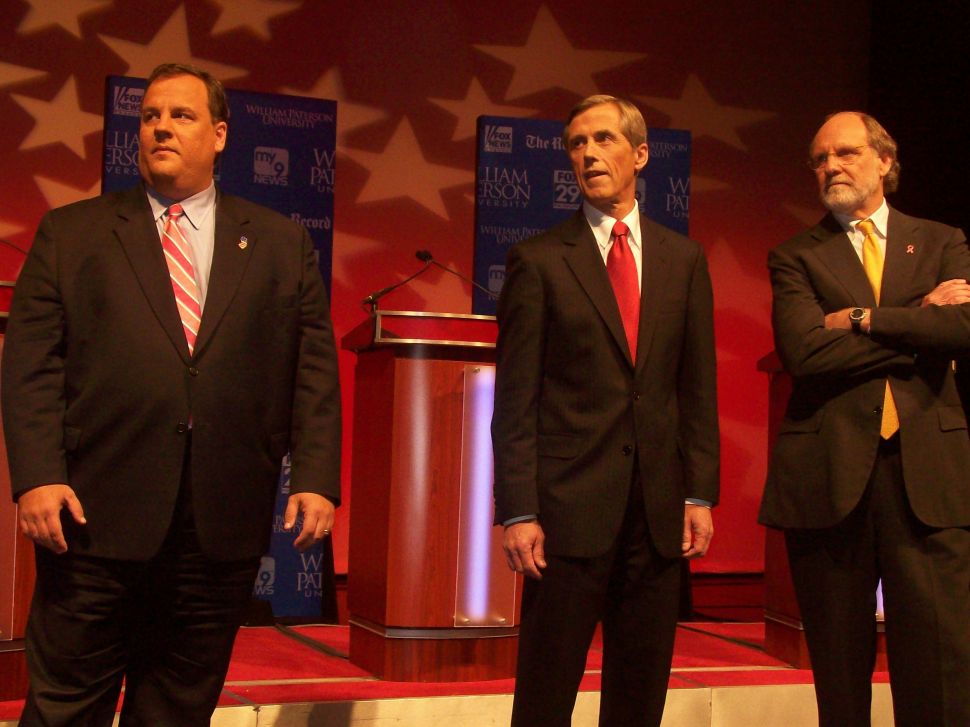