BELLEVILLE – Notwithstanding a mistaken reference at one point to “Corky Booker,” Newark Mayor Cory Booker’s New Jersey political peers paid tribute Wednesday night to their rock-star-in-residence, who tonight is scheduled to sit down on The Tonight Showwith Conan O’Brien in a mock-up mano-a-mano for their now weeks-long national news spat.

“I wonder if New Jerseyans are going to be watching Conan and Cory or Corzine and Christie,” cracked Gov. Jon Corzine, a day before heading into pre-debate seclusion in preparation for his William Paterson University gubernatorial showdown with GOP rival Chris Christie and independent Chris Daggett, which also airs tonight.

Booker two nights ago headlined the Nanina’s in the Park fundraiser held by Essex County Clerk Chris Durkin, who described as “global” the motor-mouthed metaphor generating mayor now racing to have more Twitter friends than Ashton Kutcher and locked in a playful back and forth with O’Brien over the late night talk show hosts disparaging remarks about Newark.

“Conan and I could have a fun and very substantive conversation on Friday,” Booker tweeted on Tuesday to 836,795 followers, whose cyberspace Hollywood rival, Kutcher, this week observed to his 3,830,305 followers that “arts education in our pubic schools is important.”

Drumrolled on invites as Wednesday’s main act, Booker was subdued at the microphone compared to most of his big crowd performances from times past, not in terms of vocal projection, but freshly conceived poetic diction, offering out of his compendium of Bookerisms an arguably mostly flatscreen check-list of political season phrases.

“‘We are tied together in the single garment of destiny, caught in an inescapable network of mutuality,'” Booker quoted from Dr. Martin Luther King, Jr.

He had words of praise for Corzine.

After about a year of perfecting short-burst Twitter-speak, Booker did provide evidence that his capacity for literary references is intact, spying Durkin’s father, former State Party Chairman Ray, in the audience and reaching back to Hemingway with a nod to the younger version in proclaiming, “The son also rises.” But the bulk of his speech was built around Revolutionary War battlefield imagery, a common Booker rhetorial touch spoken with no great urgency.

“It’s like the Battle of Bunker Hill, which was actually fought on Breed’s Hill,” said the mayor, searching for and finding the metaphor for this year’s gubernatorial contest, an update from his 2008 Democratic Primary mantra in which he likened the Hillary Clinton-Barack Obama contest to Washington’s march across New Jersey, then left Corzine blinking his eyes in bewilderment on the same stage when earlier this year he poetically urged a crowd of Jersey City residents to take up rifles in the cause of Jerry Healy for mayor.

Not telegraphing any worry about the dearth of compound sentences and new imagery from a chief executive in a city where 52% of Newark high school students graduate in four years and where unemployment is at 14.8%, yet infuriated by what he sees as the younger man’s propensity to try to play Batman with a BlackBerry, Booker’s challenger for mayor next year, retired municipal Judge Clifford Minor, this summer urged his rival to shelve the global communication device and go local.

There’s little evidence that will happen – or that Minor will gain traction in his bid to unseat Booker in 2010, as last month the challenger’s communications director left the campaign, frustrated by Minor’s aversion to new media messaging – but leaving at least one groan in the Nanina’s crowd as Booker fell back on rhetorical devices exhausted nearly two years ago in the throes of the Obama election, long before Late Night with Conan O’Brien and Twitter. 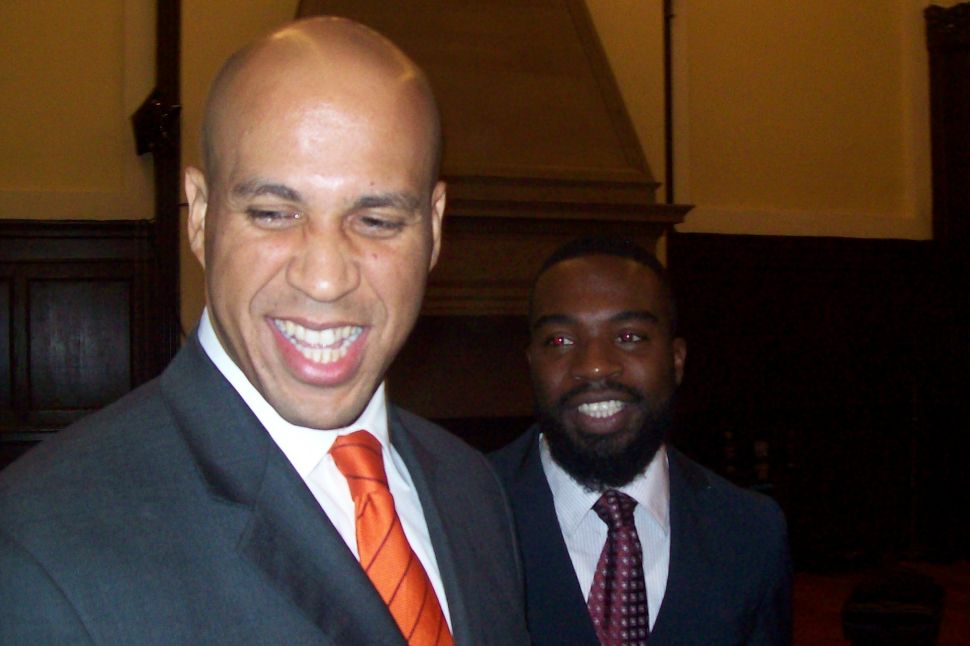