"My focus going forward is forthe people of the Stateof New Jerseyto have more a affordablequality of life,a more accountable government, and real job creation," said Kean, when asked by PolitickerNJ.com if he had ruled outthrowing the support of the 17 members of his caucus to the embattledsitting senate president.

"We will work in a bipartisan fashion to achieve those ends,"added Kean.

Codey earlier in the week learned that Sweeney had mustered 14Democratic votes in a 23-member caucus, propellingthe labor leader senator from South Jerseypast the 62-year old veteran senator and former governor in their Democratic caucus.

Kean wouldn't comment on whether he had talked to Codey or Codey's allies,who are said to be reaching out not only to Kean but other Republicans in an effort to counter Sweeney's salvo andwin GOP support for thesenate president now serving in his sixth year in that position.

Codey's alert to Kean'sstated commitment to keeping hs own caucusunited.

"The 17 Republicans will vote as a block in January and we will be unified in our efforts as we look to the next session of legislature," Kean said today."We will use principles of unity."

But Codey's allies fixed during the summer on a statement Sweeney made to PolitickerNJ.com when the senate majority leader said he would not challenge the senate president if he couldn't get the votes in his own caucus. In other words, he made it clear that he wouldn't pursue Republicans.

"That's because he can't get them," said a source close to Codey, an argument disputed by Sweeney allies that may now be tested.

Republicans – to this point basically sidelined during the process – could be persuaded to supportthe senate presidentwith the right empowerment dealon thetable, according to sources.One Codeyofferincludes 50% chairmanships on key committees and key seatsduringnext year'sredistricting process, or variations on such a package, in exchange for Republican backing for Codey as Senate president.

"I'm not afraid and I will do what I have to do to fight for the people of this state," said Codey, whose argument for remaining in power hinges on preserving the senate from an all-out encroachment on the affairs of the senate by Sweeney ally and South Jersey powerhouse Norcross.

"Anyone who knows me knows I'm not controlled by anybody," Sweeney routiney counters.

But Codey might be able to work with them, and apparently was trying this week to alignhis nine (or eight, presuming state Sen. Loretta Weinberg (D-Teaneck) stays out of the fray) Democratic votes with 17 lock-step Republicans to defeat Sweeney in the full, two-party chamber, 25 to 14.

The challenge for the senate president on that front, however, is the chilly receptionthe2007class of young Republicans says he gave them whenthey assumed the oath of office.

"See if you can behave yourself," Codey told state Sen. Kevin O'Toole (R-Cedar Grove), a mood crusher with thenew senator's parents in attendance at the State House, according to sources close to O'Toole.

Then there was state Sen. Jennifer Beck (R-Red Bank), who'd just defeated Codey's charge Ellen Karcher in the mostpublicized contest inNew Jerseythat year, enduring a lecture from Codey on senate etiquette, and a tongue-tied state Sen. Steve Oroho (R-Franklin)onanother occasion suffering a crack made from the rostrum by Codey.

If the new group of GOP stars in training didn't vibe with the old school Democrat the way their more genteel forbearers did in theLittel-Kavanaugh-Lance era, Codey nonethelessdeveloped particularly goodrelationships with some of them, including state Sen.Sean Kean (R-Wall), whose wedding he attended just last month.

Whatever shortcomings they endured by way of being Republicans coming into officeat the tail-end ofthe Bush era when the brand was notwhat it was in the Tom Kean, sr. era, for example, the new Republicans led by state Sen. Bill Baroni (R-Hamilton), O'Toole andBeck watched Democrats assume leadership roles under Codey and quietly chafed, wondering when they'd get their shot.

Part of the deal would likely include increased powers for Kean, whose own father in 1971 cut a deal to become Speaker with Assembly Minority LeaderDavid Friedland, who crossed the aisle and supported Kean in exchange for 50% control of committee chairmanships, 50% control of the money in the lower house, a conference committee that had the power to remove any bill from committee, and a generous North Jersey aid package for Essex and Hudson counties.

"I call the senator my son," Rice says frequently, recollecting with happiness his longstanding good relations with the former governor who served from 1982-1990, Kean's father, and noting that he and another friend, U.S. Sen. Frank Lautenberg (D-Cliffside Park), were first elected to their respective poststhe year afterKeanwon his first bid forgovernor.

Sources close to the strait-lacedsenate minority leader say he clashes on occasion with the wise-cracking Codey, and has good relations, by contrast, with Sweeney, with whom he notably joined forceslast year to curtail public workers' salaries and benefitsby 15%.

But with Sweeney's Democratic-centric deal already locked in, according to sources, and the leadership roles apportioned accordingly in exchange for Sweeney support, Kean and Codey may convince each other thatthey need each other.

If the deal could be cut, and assuming Kean could keep intact a caucus never in love with Codey but now motivated by self-interest, Kean would bring his aggressive and long impatient GOP colleagues into committee leadership chairs, andstrengthen his own role as senate minority leader -and Codey would remain senate president.

But even then, for Codey, it's not as easy as simply edging out Sweeney and his coalition of Democratic Party backers in the senate, for Codey'sfoes inEssex County have simultaneously positioned African-American Assemblywoman Sheila Oliver (D-East Orange)tobecome speaker in the Assembly.

As Sweeney -again, a South Jersey politician -strengthened his hand in the upper house over the past two weeks, culminating with his announcement three days agothat he had the 14 votes necessary to beat Codey,Essex County Democrats led by County Executive Joe DiVincenzo moved to position Oliver as a North Jerseylower house counterweight.

If Codey cuts a deal with Republicans to hold onto the senate presidency, heruns the risk of facing the same wrath Friedland encountered when Friedland's support for Keanshort-circuited Assemblyman Howard Woodson (D-Trenton).

"That was the cruelest cut of all," Friedland told PolitickerNJ.com, describing the pain he felt in impeding the advance of the first African-American speaker, who would actually land the job after Kean, an irony for the progressive Friedand then as now, as Codeyprides himself onexcellent relations with the black community.

In honor of ethnic, geographicand gender balance, at the very least, sources say part of Codey's maneuvering may have tostretch into the Assembly, where AssemblyMajority Leader Bonnie Watson Coleman (D-Ewing), also an African-American woman, is running against the politically connected Oliver- that is, politically connected on the Democratic Party side.

"It ain't over," veteranEast Orange Mayor (and Codey ally) Robert Bowser reiterated last night to PolitickerNJ.com when he appeared in support of Gov. Jon Corzine at the gubernatorial debate at NJN studio in Trenton.

That was not an opinion shared byBowser's fellow Essex County Mayor Cory Booker of Newark, who toldCodey on Wednesday that he supported him, then backpedaled a day later when he bluntly toldthe senate presidentthat Codey didn't have the votes.

"Apparently he confused me with Conan O'Brien," said Codey, a reference to the mayor's twittered outrage overa comment the late night talk show host made about Newark,a sliver of which falls withinthe senatepresident's home district. 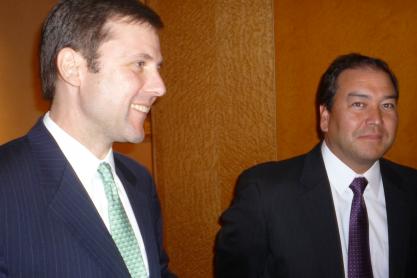