Weinberg argued thather running mate, Gov. Jon Corzine, in his four years as governor reduced the number of uninsured by 11%, preserved tax rebates for seniors and those making under $75,000, expanded family care, cut the state budget by $4 billion and trimmed the state payroll by 8,000 employees. Guadagno plugged Corzine and Democratic leadership in Trenton for saddling the state with an $8 billion budget deficit, perpetuating corrupt political organizations with contributions, failing to rein in the state state's property tax crisis and running a scorched earth style campaign.

Running mate offormer U.S. Attorney Chris Christie,who satdown infront and observed the contest a few bodies removed from Corzine, the tough-talking Guadagno, 50,vowed to be the second half of a corruption-busting team that would arrive in Trenton and lay waste to state government.

"The key issue is not mammograms, it's taxes, taxes, taxes," said Guadagno, referring to theformerissue in the context of a repeated scrap the candidates waged over the phrasing of a Corzine campaign ad that criticizes Christie for not including mandated mammogram coverage in hishealthcare plan.

"We're talking about whether people canafford a mammogram or not," said Weinberg, arguing its importance as an issue of economic fairness.

Throughout, Weinberg, 74,wearily wanted details from the critical Guadagno.

A veteran politician and no stranger to political battles – often with bosses in her own party -the state senatorlanded a jabearly when she sternlyannounced that shehoped to hear "specificanswers to the complex questions facing New Jerseyans."

A formerprosecutor with a courtroom corruption busting record, Guadagnosounded rattled at first, stumbling over her opener in this debate stagednear the summer home of President (and former New Jersey Governor) Woodrow Wilson.

But she settled down and settled in fast, quickly going on the offensive and repeatedly targeting her opponent in aforum that appeared to frustrate Weinberg throughout the course of the hour-and-a-half-long News 12 television debate that was simultaneously broadcast on Millennium radio.

When Millennium broadcaster Eric Scott directed a sharp-elbowed question at Guadagno at one point, demanding a property tax reduction plan, Weinberg answered the question, appearing to unintentionally give her opponent a back door.

The senatoralso walked undoubtedly into an anti-Corzine adinenunciating the four words Guadagno was trying to extract when she quizzed her opponent. "Property taxes are too high," said the Democrat as part of a compound sentence answer bracketed by jargon and caviats but clear in its GOP advert implications.

"I don't think Loretta Weinberg was flustered," said Patrick Murray, Monmouth University pollster, who watched the debate unfold in the back room press area. "She wasn't thrown off, she knew the answers to the questions. I think what it was is she was here to play the attack role, while she was also trying to set the record straight."

Weinberg stuckto the issue of what she and the Democrats believe is the Republican ticket's failure to present a tax-cutting plan trimmed of platitudes. Guadagno in response promised to "turn on the lights in Trenton in January and turn over every single rock," promptingno look of elucidation on the face of Weinberg.

The Democrat and Republicanswapped gaffes.

Weinberg mispronounced the name of the controversial 287(g) illegal immigration policing program, while Guadagno botched the name of former Bergen County Democratic Organization chairman Joe Ferriero, on trial for corruption in a case spearheaded by Christie.

Asked if Guadagno did as well as Christie did poorly in his top-of-the-ticket performance last Thursday night, State Republican Chairman Jay Webber in the aftermath shook his head at the premise of the question, but acknowledged what he thought was the sheriff's supremacy – even when considered alongside Christie.

"Chris Christie was terrific the last time and Kim Guadagno might have outdone him," Webber said. "She proved she was the most qualified candidate onstage tonight, as Sen. Weinberg failed utterly to explain and justify the lengths to which the Corzine has sunk in its advertising."

That was a reference to Scott's blunt question – criticized by Democrats after the debate as unfair – about a Corzine campaign ad subliminally referencing Christie's weight.

"Do you think Chris Christie is fat?" Scott wanted to know.

Appearing to be taken aback by the question, Weinberg recovered in time to say she didn't think any of the people running would be model Bachelor or Bachelorette contestants.

At another point, the radio newsman asked if the candidates believe driving records – again, a reference to Christie, this time his wrong way down a one-way street crackup in Elizabeth several years ago.

"She was the captain leading the team up there tonight," state Democratic Party Chairman Joe Cryan said of his party's LG candidate. "Ask the guy who got sent to the trauma center if driving records matter."

Beset by negative headlines last month when she said in Newark that she knows what it's like to be afraid walking down the street in New Jersey's largest city, Guadagno tonight in front of a hometown crowd appeared relaxed and sporting.

"Kim Guadagno came out on top in this debate where Chris Christie came out on the bottom in the last debate," said Murray. "She defied expectations and showed she understands New Jersey."

As he exited the theater with his running mate immediately after the contest, Christie, when asked what he thought of her performance, said, "She did great."

With his ticketmate, former DEP (Department of Environmental Protection) Commissioner Chris Daggett, in attendance, the lowkey Esposito, interim dean at Kean University, tagged Weinberg a few times, prompting Democrats to later complain that everyone was ganging up on the Bergen senator. Most notably, when Weinberg boasted of campaign finance reform achievedduring the Corzine era, Esposito dryly noted that those laws benefited the Wall Street millionaire and others in his financial bracket.

But while privately giving Guadagno credit for her presentation tonight, Democrats still chalked up a win forthe Corzine campaign based on what they see asGuadagno'sreluctance to get specific on the issue of a property tax relief plan.

"Where are the facts?" wondered U.S. Rep. Frank Pallone (D-Long Branch) as he left the event. "The Corzine administration reduced the budget and expanded healthcare."

Askedif Weinberg's focus on the Corzine administration's record prevented her fromexpounding on a vision for the next four years, a criticism leveled at Corzine after his debate when he stumbled through an answerabout what heintends to do if elected to a second term, Pallone said, "I think what she was saying is we are already tackling these problems, and really clarified the issues going forward. The vision is built on what we've done."

But with Corzine's approval ratings still under 40% in an election that most polls now rate a statistical dead heat, Guadagno'swillingness to go on the attack tonightboosted Christie partisans, who, after leadingfor months,were stung these past two weeks by a tightening race. 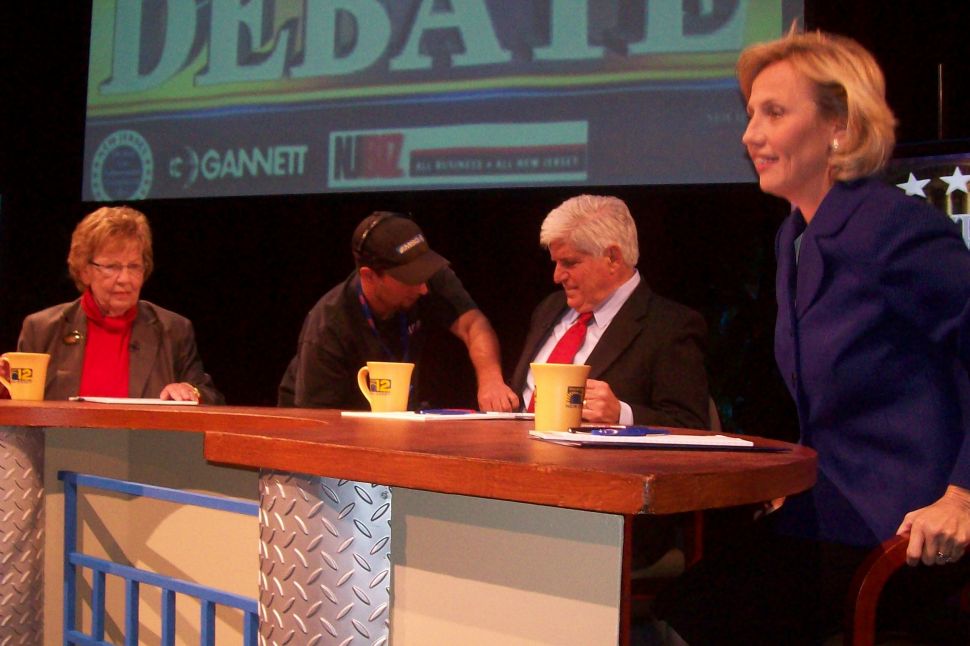