TRENTON -A wounded county came out here tonight to get a glimpse of former President Bill Clinton before the Secret Servicepropelled him away – again – to some more voter-concentrated region of the state forwhat Democrats hope will be apay dirt rally at Rutgers University.

"I knew you weren't here to see me," Mayor Doug Palmer told a crowd at his $150 fundraiser for his nonprofit Trenton First, over one of his shoulders stood Gov. Jon Corzine with two weeks to go in a dead-heat gubernatorial contest.

"You're here to see the president," supplied Palmer with a smile and deafening war whoops filled the banquet hall here at the Marriott, a building Palmer helped bring to Trenton.

The mayor acknowledged Corzine at last, and threw in a "first and foremost" when introducing him. Corzine, it should be said, received raucous applause.

"The check is in the mail," Palmer said with a devilish grin after Corzineput ina brief plug for Palmer's nonprofit. Palmer turned to another special guest, Philadelphia Mayor Michael Nutter, before building up Clinton as the spearhead of the crime bill and homeowner zones that enabled Palmer to create 1,500 units of housing.

"I wanted to have a 501-c3 to work for the people of Trenton – William Jefferson Clinton gave me that idea," Palmer said.

WhenCorzine and Clinton later headed for the exit and a second-leg stump at Rutgers University on behalf of the governor, polling at 39%, according to the latest numbers from Monmouth University in his race with Republican candidate Chris Christie, he left behind at least two African-American politicians fromMercer whoduring his presidential era of the 1990's had looked likethe stuff of statewide elections: Palmer and Watson Coleman.

Big-time Hillary Clinton supporters in last year's Democratic Primary -in Palmer's casethe Clinton connection startedbackin the days when he used to regularly visit the president at the White House, "I visited so many times, I didn't even steal the paper towels anymore," Palmer said tonight-the mayor andWatson Coleman ended up on the wrong side of that presidential primary battle and ultimately on the wrong side of Newark Mayor Cory Booker in the case of the former.

In the case of the latter, Watson Coleman found herself abruptly on the outside ofa deal between Newark and South Jersey thatfroze herout of the Speaker's chair, whichsources say she coveted after coming up short in the lieutenant governor's sweepstakes.

Originally, Palmer and Watson Coleman were both on that governor's LG short list.

Reportedly leaving office next year after a 20-year run (it should be noted that he has not yet made a formal announcement that he intends not to run), Palmer had liked the idea of being Corzine's running mate, andwas encouraged when the governorfloated his name at least once.

Corzine also dribbled Watson Coleman's name for LG out there, and at one point she looked very much like the favorite.

Internal polling showed Corzine improving his chances if an African Americanran on the ticket with him, but although his campaign bumped up against the Mercer County names a couple of times, they ultimately shied away and began strenuously courting Booker, mayor of the state's largest city in arguably the Democrats' most important county.

But Booker didn't want the job, and when he was repeatedly clear on the point, and his allies repeateldy insistenton his interest in governor2013,the African-Americans' chances of a Corzine running mate fumbled away when the Star Ledgerpanned the governor's intended Booker-on-the-spot in the person of Rhodes Scholar/buisnessman/reality TV star Randal Pinkett.

State Sen. Shirley Turner (D-Lawrenceville), herself on the losing end – at this point – in backing Senate President Richard Codey (D-Roseland) against Senate Majority Leader Steve Sweeney (D-West Deptford) for senate president, a contest that Sweeney's appears to have won in the Democratic caucus with 14 votes to Codey's eight, was philosophical.

"Politically, the more populous counties dominate,"acknowledged Turner, in a crowd with Palmer and Watson Coleman.

After spending time here in Trenton with his old friend, Palmer, Clinton proceeded to the Corzine campaign's big rally in New Brunswick.

“Jon Corzine has a proven record of doing what’s right for the people of New Jersey, no matter the political or public opposition,” Clinton said. “By making paid family leave the law, expanding health care coverage to an addition 100,000 children, and creating a more fair and equitable school funding formula for students, he has been the rare kind of governor who has made positive, meaningful changes in the lives of people across the state.” 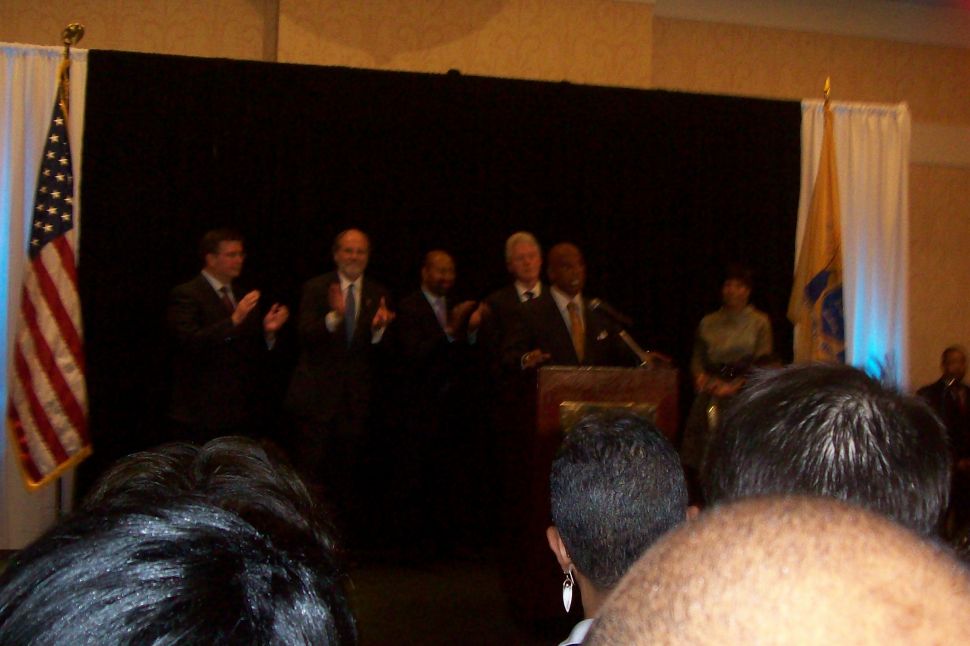