Stunned by the Press's Sundayendorsement of his Democratic opponent, the same paper that endorsed the Republican last year, Curleyturned around andcondemned Byrnes for voting on Jan. 6th, 2008 againstappointing Thomas F. Stokes to the Middletown Sewerage Authority.

“For Mr. Byrnes to vote on this man’s appointment, instead of recusing himself, is unethical and frankly, unconscionable," said Curley, a Middletown resident and former Red Bank councilman who this month reported $46,983 raisedto ELEC."Anybody who has been a local elected official for five minutes could see that this is a total conflict of interest and that he had no business voting on this appointment. If Mr. Byrnes cant recognize a conflict on a matter as clear cut as this, how can anyone believe he’ll do it as a freeholder?”

A day before the two men are scheduled to square off in a debate for a seat to represent this traditionally Republican county where registered Democrats now outnumber the GOP and where control of the freeholder board hangs in the balance, Byrnes said that as a township committeeman he has opposed all of the appointees to the local sewerage authority.

"I represented (the client), but I didn't have any personal interest in the lawsuit," said Byrnes, who reported raising $36,065. "There were four people up for appointment to the Sewerage Authority at that time, and I votedagainst all four.I've never voted 'yes," or for any salary, health benefits, or pension benefits for members of the sewerage authority. They shouldn't be doing that. It amounts to $100,000 for taxpayers each year. Middletown shouldn't even have a sewerage authority.

"Idon't vote to appoint people to the sewerage authority," he added. "It's just a boondoogle. Iintroduced an ordinance earlier this year to do away with pay, pension andbenefits for sewerage authority members."

Curley has repeatedly hounded Byrnes over the newly Democratic-controlled Freeholder Board's decision to givea homeland security job to former Hazlet cop Glenn Mason, who ran against Curley for the freeholder board last year and also lost.

"Sean Byrnes talks about transparency," said Curley. "He tries to play the role of Bobby Kennedy. He talks in generalties. But when they asked him in the editorial board meeting if he would have voted in favor of Glenn Mason, he said he probably would have."

Curley's point is that Byrnes doesn't like patronage when it applies to Middletown Republicans, but has no problem being party to a pay-off for a former political candidate.

"Glenn is totally qualified," she said. "That is not a political appointment."

The Press's endorsement of Byrnes lands in acounty political climate that Republicans controlled for over two decades.

Democrats gained ground in the new millenium, winning three seats to secure the majority over the course of three years, but sustaining a hard loss when their first winner during this period, Freeholder Barbara McMorrow, announced her retirement this year due to health reasons.

Hoping to hold a 3-2 majority, the Democrats recruited Byrnes, an attorney and Coast Guard vet, to go up against Curley, whohelps managethe family automobile business.

Curley lost last year to Mallett, who had appeal in the 12th Legislative District's western region – Manalapan and Marlboro – where Jewishwomen came out big for one of their own. This year, up against the tough challenge of an unpopular incumbent in Democratic Gov. Jon Corzine at the top-of-the-ticket, Byrnes' handlers are highlighting his veteran appeal and coordinating heavily with 12th District Assembly candidate Michelle Roth, a formerManalapan mayor.

"ThePress's endorsement certainly helps," said Brynes."I'd rather they endorsed me than not endorsed, butthe endorsement is not what it was ten years ago before new media.Certainly I think it's helpful, and theyaccurately reflected what I'm trying to do. They see that Ihave the experience and the drive and the ability to push this board beyond its 20-year legacy."

"I was told," said Curley of the Press, "that they needed a token Democrat." 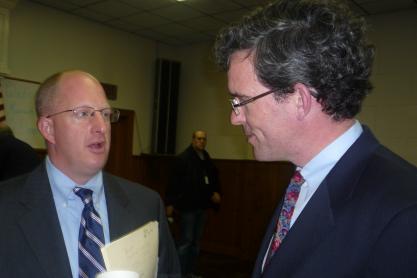