After the first gubernatorial debate, campaign officials from both parties said that independent Christopher Daggett was the winner, albeit not for attribution. Daggett's debate victory provided his campaign with substantial momentum – he got a huge amount of free media attention, maybe a slight bump in the polls, and tremendous boost of self-confidence (although that didn't seem to come with increased campaign contributions). The debate win likely helped him score a second victory: the Star-Ledger, New Jersey's largest newspaper, endorsed his candidacy.

But now, one debate later, these same Democrats and Republicans who had tipped their hats to him, think he was the biggest loser in a race that provided no real winner. Expectations were high; after all, Daggett was the great debater, the guy who could put Jon Corzine and Chris Christie in their places, the man who would show the state why the two party system was a failure.

Instead, the D and R strategists who were so willing to award the first debate for Daggett thought he came off a little whiney and a lot pompous. He lacked some of the specifics of Debate #1. And he cracked too many jokes – it was sort of watching some comedy club failure trying to pretend to be Dick Codey.

And Daggett didn't say a word about his own record in government. He served in Tom Kean's cabinet, and held a top environmental post under Ronald Reagan. No mention of specifics of his own record.

Two other things came out of discussions with major party strategists: they think the man who hired fat and bald actors has no standing to criticize negative campaigns, and they are convinced that Daggett was unable to name a single Justice of the United States Supreme Court, even though panelists gave him several chances. 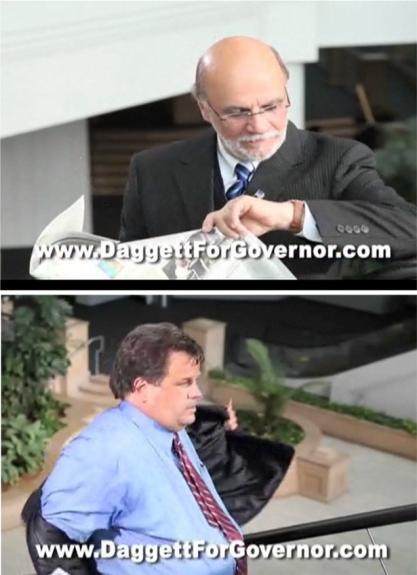