Obama said that Corzine “understood that Pre-K isn’t babysitting – it’s a ticket to a world class education” – a reference to a point Christie made in a Republican primary debate.

Christie's cam[aign today put out a web ad showing struggling New Jersey communities with inspirational Obama speech excerpts in the background, in which the President urges an end to partisan rancor. Throughout the general election campaign, Christie has remained largely uncritical of the President, sometimes even highlighting cases where the two agree. But the rhetoric from the president this evening was not mutual.

“Listening to Jon’s opponent, you’d think New Jersey was the only state swept up in the [economic crisis]” said Obama, who did not once mention Christie’s name in his 25 minute speech. “There seems to be some selective memory about how we got into this fix.”

Obama threw Christie in with the larger Republican party, saying “these other guys have a lot of nerve to leave this big mess and complain about how long he’s taking to clean it up.”

The criticism of Chrisite, however, was a short part of Obama’s speech, which mainly praised Corzine’s economic policies like paid family leave and cutting the state budget. It was markedly different from his July campaign appearance for Corzine in Holmdel, where Obama spent the bulk of the speech on his health care plan 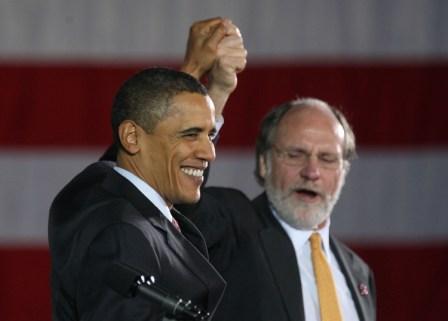