ASBURY PARK – The event at the West Side Community Center appeared to lack coherence from the beginning, as operatives with furrowed brows tried to figure out how to get more people burrowed in,while headliner Pennsylvania Gov. Ed Rendell sat in a sedan outside in the rain and Newark Mayor Cory Booker was MIA.

"I told him whenever he needed me, I'd be there," said Rendell, referring to an August conversation he had with Gov. Jon Corzine, who's deadlocked in his reelection bid with GOP gubernatorial candidate Chris Christie on the same day Corzine campaign manager Maggie Moran on "Power and Politics" for the first time blasted independent candidate Chris Daggett, who this past week inched up ina Rutgers-Eagltonpoll to 20% behind the frontrunners' 36%.

Whatever the thrills provided last week by President Barack Obama and other Democratic Party luminaries, this particular rainy weekendcampaign episode was not looking like the rally that would propel Gov. Jon Corzine into a second term on "the wheels of inevitability" described by Martin Luther King, Jr., in a favorite Booker quotation.

But Obama proved the connecting pointbetween these two unlikely headliners.

The rain kept coming, and as the local candidates entered the dimly lit gym and began to take up positionsat the front of the room- Freeholder candidate Sean Byrnes, and District 11 candidatesRandy BishopandRick Bolger- Rendell finally emerged from his car and appeared indoors, ready to occupy the stage at a signal from Asbury Park MayorEd Johnson.

Invoked on a fairly regular basis by Republican gubernatorial candidate Chris Christie as the "man stealing Jon Corzine's lunch money" as he presides over a neighboring state with an income tax of 3.07% compared to 11% for New Jersey, Rendell laughed off the compliment.

"I guess Chris Christie hasn't been following our budget process or he would know that my first proposal was to raise our income tax,"said the Pennsylvanian, like Corzine a staunch backer of Hillary Clinton's 2008 presidential run.

After winning his own reelection in 2006 with 60% of the vote and bandied from 2004 to 2008 on the strength of his favorables aseither a Kerry running mate or Obama cabinet member, Rendell now stares at a 39% approval rating, and consequently sympathizes with Corzine.

"I think Jon Corzine was saddled with several decades of missteps," said the Pennsylvania governor. "But understand, what New Jersey has is a highly skilled and educated work force. Jon Corzine understands that, unlike hisopponent. In this environment, it's all about education, which is why he supports universal Pre-K.

"This idea of trying to pit Pennsylvania against New Jersey," he added with a grin that just as quickly turned into a grimace. "You're competing against Asia and Europe now, not Pennsylvania. You have to invest. That's what Jon Corzine isdoing, investing in infrastructure and education, and I don't see his opponent committing to do the same."

The crowd rushedan oncoming figure who came through the double doorssmiling broadlyat faces in the Asbury Park crowd numbering about 50 people.

It was Booker, who high-fived and hugged his way up to the front of the room where co-headliner Rendell waited onstage with the locals and Johnson built up both Corzine surrogates for this crowd not only considering a governor's race on Nov. 3rd, but a freeholder contest between Byrnes, the Democrats, and his Republican opponent, former Red Bank Councilman John Curley.

Christie from the start of the general election has tried to embrace the halo around Obama and make it his own, arguing that he'sthe change candidate bigger than party affiliation in this state where Democrats boastconsiderably more registered voters.

Regardless of people's personal feelings about Corzine, Rendell (who owns a house in Ocean City) and Booker were here today to remind Asbury Park that Christie's election in a blue state would send an anti-Obama shock wave through the country and disrupt the Democratic president's initiatives.

"What happens in New Jersey is going to reflect on President Obama," Rendell told the audience. "We've got a tougher road to hoe in Virginia, but if we were to lose Virginia and New Jersey – two elections – people would say it's because of Obama and as such it will be more difficult for him to pass healthcare reform and the public option.

"Do you think Chris Christie would pick a public option for New Jersey?" Rendell wanted to know.

After getting a laugh when he said he was happy to be able to speak before the electric Booker, Rendell skidooed, planning to hit anotherpro-Corzine campaign rally in Atlantic City.

Booker grabbed the microphone from Johnson and hopped off the stage for an eyeball to eyeball.

"I like the man," said Booker, referringto the governor and why he decided to appear in Asbury Park on a Saturday. "It's not about (coming out to campaign events) the food.

"But it's not because I like Jon Corzine that I'm here," added the Newark mayor, who's up for re-election next year and who is widely whispered aboutas his party's 2013 candidate for governor.

Booker knows Christie's wrapping himself in the same shroud of change Obama wore last year, but Booker made the case for Corzine as a governor who cut the budget while expanding government spending for at-risk urban children. Former President George W. Bush tried to downsize the state Children's Health Insurance Program and Corzine successfully resisted.

Moreover, "Jon Corzine sat in my office with tears in his eyes after three young Newarkers were killed and asked me, 'Cory, what canI do," Booker told the small crowd.

And last week, in a bear hug with Obama, the president told the young mayor who had supported him in 2008 against the tide of Hillary Clinton, "Cory, we've gotta win this election.

"IfJon Corzinedoesn't win, a victory by Republicans in New Jersey will embolden the president's enemies," said Booker. "This election will come down to what the turnout was in Elizabeth and Paterson, Jersey City, Newark and Asbury Park. In this crisis, let us stand with Jon Corzine. It is Corzine time. It is Jon Corzine time!"

The crowd emptied their seats. 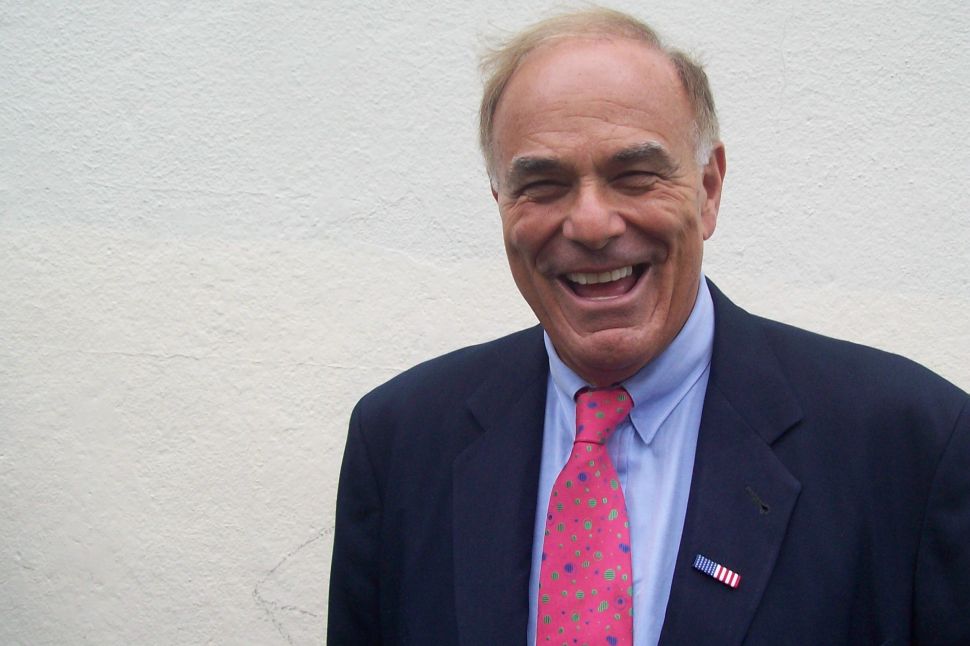