Some political insiders view independent Christopher Daggett as a potential spoiler in the race for Governor.

"I think the race has come down to Daggett," said Newark South Ward leader Carl Sharif, a Democrat and a Corzine supporter. "With Chris Christie and Jon Corzine even (most recent polls register the candidate in the 40% range), the question becomes whether Daggett's 12 to 14 percent is solid support. If it's hard support, Corzine wins. If its soft support, and those voters peel off Daggett in the voting booth, most polls show they're going to vote for anybody but Corzine, and that's where Corzine could have problems. That's where Christie wins."

Democrats like Sharif figure that as long as Daggett's support holds and he drains Christie's independent voter support in southern Morris, Somerset and Hunterdon counties, Democrats can win a GOTV dogfight with their superior party machinery and squeak Corzine back into power.

"Barack Obama is here today as part of a mechanical calculation," said Bill Schluter, a former Republican senator and independent candidate for governor in 2001 who supports Christie for governor. "His presence here is designed solely to motivate a listless Democratic Party base, and it remains to be seen whether that actually works."

"The Democrats have brought in two party sweethearts in as many days – Obama and former President Bill Clinton – and whether that translates is a big question," he said.

Biden, Clinton, Obama – all the big names this week here stumping for Corzine still lead people back to Daggett.

Tom Daggett is how one Hunterdon County Republican repeatedly referred to him in a conversation with PolitickerNJ.com, derision unintended, whose off-the-record observation from Republican Party countrywas the same as that of his counterparts in urban New Jersey: there's no enthusiasm.

So talk – in all circles – returns to Daggett.

"Chris Daggett does not have my background and experience as a legislator, but he does have the advantage of having qualified forpublic matching funds – and that's the big difference," said Schluter, who received 1% of the vote inhis gubernatorial contest with Republican Bret Schundler andultimate winner Woodbridge Mayor James McGreevey.

Although he does not believe Daggettcan win, or come close to winning,Schluter said he agrees with Sharif that the independent will decide this election and for the same reasons.

So does Hillside Mayor Joe Menza, reluctantly, an independent who backs Christie for governor.

"Daggett's the clown of the election," said Menza. "He's got nothing to lose, so he's out there laughing and cracking one-liners. Corzine and Christie are beating each other up, so for some people, he becomes an option. But all he is is a spoiler.I think if he gets above 13 points, Christie's in trouble. If he gets below ten points, Christie wins."

Dr. Peter Woolley, director of polling for Fairleigh Dickinson University, who on Oct. 6thread the race as 38% Corzine, 37% Christie and 17ggett, said he thinksDaggettis "a sponge soaking up the hemorrhage of discontent,"and any other word or idea reflecting independence in this environment works just as well, he said.

But Woolley rejects the notion that soft Daggett backers will vote for Christie.

"In our poll, when you reverse the cross tabs, you can see that it's two Democrats for every one independent, for every one Republican – 2-1-1. So, just on party affiliation, Daggett's hurting Corzine, because these are Democrats. Everybody's assuming he would vote for Christie, but what people don't seem to be talking about is that voters are not a zero-sum pool. Do you understand?

"There are always voters who stay home, who say, 'I'm frustrated, I'm going to sit this one out," Woolley added. "If voters decide not to vote for Daggett, that doesn't mean they're going to vote for Christie, it just means they'll stay home.He's a reflection of people's discontent, not a pied piper. Remember, in our poll, there are three dramatically different results when you change the name of the independent candidate: he gets five percent when we don't mention him by name, 17 percent when we mention him by name, and 12 percent when we subbed in (another independent candidate) Gary Steele. That suggests to me the idea that peopleare takingless toChris Daggettthan to the word 'independent.'"

"If Daggettgets between eight and15 points, he's costing Christie," said Patrick Murray, polling director for Monmouth University."Below eight points, he takes away from both Corzine and Christie, and above 15 points, he starts taking away from Corzine. For Corzine,12%, because that 39% of Corzine support has been pretty dang steady at this point."

Murray rejected the notion that Corzine's allies, chief among them Obama, will have no effect.

"Democrats approve of Obama by 87%, compared to 64% for Corzine, and what our polling is showing is that Democrats who might not have come out for Corzine are beginning to see this as a referendum on Obama, and they want to get out there and vote,"" Murray said.

Nonetheless, Steve Adubato, leader ofNewark's North Ward Democratic Organization and a Corzine supporter, said, "Are you kidding me? You think I know who's going to win this election. We've never seen this before. I wouldn't bet a dime. You know why? Because of Chris Daggett." 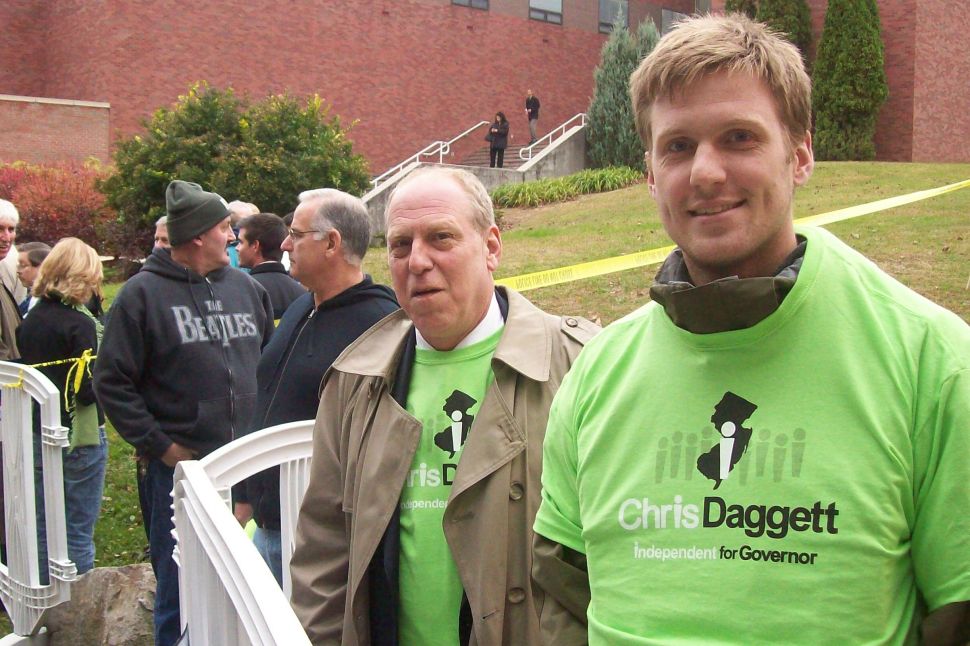