Independent gubernatorial candidate Christopher Daggett is stretching his limited campaign resources by not providing health insurance to his campaign staff, and by paying them not as employees but as independent contractors — – a move that saves him some money because he does not have to pay a payroll tax.

Full-time campaign staffers for Jon Corzine and Christopher Christie receive health benefits and are paid as employees, representatives of both campaigns told PolitickerNJ.com.

Daggett's campaign justifies the way he pays employees as a necessary sacrifice given the race's vast fundraising disparities. According to the latest reports filed with the Election Law Enforcement commission (ELEC), Daggett has raised $1.1 million to Christie's $9.6 million and Corzine's $16.8 million. He had only $109,000 on hand.

"Chris Christie is not in Jon Corzine's league and we're not even in Christie's league,"said Daggett spokesman Tom Johnson, referring the campaigns' cash totals.

But paying full-time campaign staffers as independent contractors can bring campaigns into a gray legal area. Even for full-time employees, Daggett is not required to purchase health insurance. But he would have to pay payroll taxes that go towards state unemployment fund and the federal Social Security and Medicare systems.

Martin Davidoff, a certified public accountant who ran for State Assembly ten years ago as a Republican, said "he's wrong" when asked whether Daggett could pay full-time workers as independent contractors. In most cases, campaign staffers should be paid as employees, he said.

"Basically, there may be one or two people who are consultants, but if they're working on his staff full-time, they're employees. Or even part-time.," he said. If it's a personlike some of these PR consultants with like 50 clients who are running this campaign or that campaign, they're probably independents. But if it's a driver working for them at $14 an hour or whatever it is, that person is in my opinion more likely to be an employee."

Davidoff said he's personally inclined to support Christie for governor but has not volunteered for him or contributed anything to the Republican campaign.

William Burns, who recently retired as an Assistant Director at the state Department of Labor and Workforce Development, said that determining the legality of the way Daggett pays his staffers is not so simple.

The state applies a three party "ABC" test to distinguish between independent contractors and employees, but one part of that test – whether a person is normally established in an independent trade or business – is given far more weight than the other two.

"It depends on what they do when they're not doing this. If they go from candidate to candidate, state-to-state as political operatives, they could be independent contractors and it would not be a violation of the law," he said.

Daggett has about thirteen staffers who work for him full-time, though only a few make a wage commensurate with a decent paying job. Others started out as volunteers. Once the campaign qualified for matching funds, they started paying those employees low salaries that amounted to slightly more than their expenses.

Ken Argiro ($1,650 per month) and Dave Butler ($1,300 per month) are paid as consultants. The campaign's ELEC report says they are drivers for Daggett and Lt. Governor candidate Frank Esposito, respectively. Charlie McCormick, paid $14,000 between July 7 and September 19, is a consultant, even though a resume he posted online indicates that he has no other job.

Since PolitickerNJ.com initially contacted the Daggett campaign about the payroll taxes, they have decided to pay them for the low-level staffers.

Daggett treasurer Peter Olsen – who is unpaid, but whose wife, Deborah, earns $16,000 a month as campaign manager — said that he is confident that the campaign is not running afoul of the law by setting up its employees as independent contractors.

The campaign's highest staffers – including his wife — move from project to project, Olsen said.

"If they hold themselves out for business, they are independent contractors," he said. "We're basically a different program because we have a tiny nucleus of people and we haven't been doing this for two years.. I'm comfortable with the position we've taken. We have contracts with the skilled people and the other people are just getting paid for their expenses."

While New Jersey businesses are not required to offer health care benefits, some candidates view it is a political liability if they don't.

"Unlike the commitment that his opponents have made to provide health insurance coverage to their campaign staff, Mr. Daggett has taken the easy and wrong way out," said state Sen. Joseph Vitale (D-Woodbridge), the chairman of the Senate Health Committee. "Using his staff as ‘consultants' removes him from the obligation and opportunity for the affordable care they deserve and places an unaffordable burden on them. It is the wrong example to set. And the wrong thing to do." 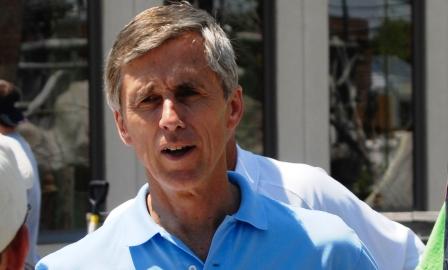