If it were a contest with run-off potential, it would be different – more obviously competive. But this is a race where the top vote-getter wins, and sources sayZimmer's base is mostly intact as she tries to stare down 2nd Ward Councilwoman Beth Mason, retired municipal judge Kimberly Glatt and supermarket owner Raia, among others, including Republican Nathan Brinkman.

As was the case when she ran for mayor in May, Mason hasdumped the biggest expenditures into this contest – $220,250 and counting, according to the state Election Law Enforcement Commission (ELEC).

But Raia'snot far behind, shoveling more than $200,000 intohis owneffort, killing the stalking horse talk that trailed him at the start of the campaign.

"Whatever it takes to win,"explained Raia. "This race is about Frank Raia and Dawn Zimmer, and I think Dawn Zimmer's in for a big shock on Election Day."

Paul Swibinski, campaign strategist for the other big money candidate in the race – Mason – won't project the Hoboken-sized confidence of Raia right now.

"It's tough to say,"he said."We feel like we've closed the gap a lot. Dawn's the frontrunner in this thing. It's hard to tell if Raia or Glatt is gaining any traction at all. We plan a very strong closing, and we have the best field operation and a lot of media. As Zimmer struggles with the budget, Beth just announced a budget platform, 20,000 copies of which were mailed out over the weekend. We're pounding away."

"Ihaven't seen a plan," said Zimmer spokesman Sam Briggs. "Platitudes are not the same as presenting a budget."

Although he's been running for local office for years,in between self-styled reformers Mason and Zimmer and a judge who served during the adminsitrations of Anthony Russo and David Roberts, Raia plugs himself as the change candidate, arguing that voters who want a return to the days of his oldpolitical foesshould vote for Glatt.

"The votersknow the people who have been there for two years have never even voted on the budget," said Raia. "Kim Glatt? You might as well be voting for Dave Roberts or (former Hudson County Freeholder) Maurice Fitzgibbons."

Veterans of a war to hold onto the new Hoboken vote, Zimmer and Mason forged an uneasyarmistice in May when the former beat the latter and then headed for the runoff election with a bump from Mason when Mason supported her over Peter Cammarano.

Since Mason's reemergence as a mayoral candidate in the wake of Cammarano's meltdown (he's been charged in federal court with taking $20,000 worth in bribes), she's doled out some heavy turbulence in Zimmer's direction,projectingbug-eyed images of the mayor and questioning her competency.

Zimmer allies, meanwhile, have questioned Mason's credentials as a corporate consultant, noting her general aversion to longer term work assignments and suggesting she doesn't have the temperament for mayor.

But in a multiple player election with at least four names wrestling for support, Zimmer enjoys the twin advantages of incumbency and a followingof ubiquitous green t-shirt wearers fiercely loyal to the acting mayor, who still see Mason's failed mayoral campaign earlier this year as emblematic of a fatal compromise (she teamed with Anthony Russo's son, 3rd Ward Councilman Michael Russo). Moreover, Mason haswatchedsome of her own supportersfromlast May's election cycle resurface on the Zimmer team, including her former campaign manager Jake Stuiver.

The Hoboken Reporter this week features a virtual bloodbath of ads with everyone attacking everyone else and in that atmosphere, Zimmer's allies are quietly exultant.

The Acting Mayor's detractors note that debating is not her strong point, and relish one last chance to weaken her on Wednesday.

After facing one another inthe campaign'sfinal debate at Stevens University that evening, the warring candidates are scheduled to attend a rally for Gov. Jon Corzine hosted by Assemblyman Ruben Ramos (D-Hoboken), chair of the local Democratic Party,andheadlined by Newark Mayor Cory Booker. 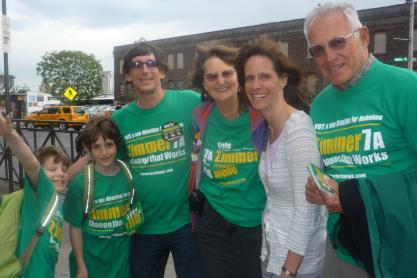