U.S. Rep. John Adler (D-Cherry Hill) is in a tight squeeze between left and right.

The freshman congressman's voting record so far is not all that different from his Republican predecessor, Jim Saxton – a moderate Republican. But his opposition to the health care bill and his amendment that loosened auditing regulations for smaller corporations – seen by consumer advocates as weakening the Sarbanes-Oxley law — have drawn the ire of progressives, some of whom staffed his campaign last year.

Republican leaders in Adler's district, on the other hand, believe that he's pulling the moderate card in his first term only to shift left once his incumbent status is more secured.

Jay Lassiter, a South Jersey Democratic activist who was the Adler campaign's new media director, sees Adler's voting record as preserving the area's status quo in representation – minus the seniority.

Although an early supporter of President Obama while most of the state's Democratic establishment backed Hillary Clinton, Adler ran his congressional race as a moderate – even if many of his staffers, like Lassiter, belong to the Democratic Party's progressive wing.

Adler was the first Democrat to win the district since the late 19th century, so most observers aren't to see him embracing moderate positions. But while understanding the point, the district's progressives aren't happy that he threw in his lot with the Republicans on health care.

"I think he campaigned as someone in the mold of Barack Obama. And his back story suggested a little more empathy," said Lassiter, referring to Adler's working class roots.

Adler mentioned on the stump last year that his father, who died while he was in high school, could never afford health insurance.

Still, Lassiter said he admires Adler and hopes he wins reelection. Other progressives, however, have been less forgiving.

"Where is the John Adler New Jersey progressives fought to elect?" wrote Blue Jersey blogger Scott Weingart yesterday. "…The courageous progressive who served in the state Senate for more than a decade has exited the political stage to make way for a cowardly freshman Representative who caves in to the teabaggers on the big votes."

Still, given Adler's huge war chest ($1.3 million on hand – more than any freshman congressman nationwide), nobody expects that he will face a serious primary challenge. He's also gotten a pass from the national party, remaining at the top of the Democratic Congressional Campaign Committee's list of potentially vulnerable incumbents to aide in 2010. And while the Democratic National Committee sent out press releases criticizing two potential future targets – U.S. Reps Frank LoBiondo (R-Vineland) and Leonard Lance (R-Clinton) – for voting "to deny their constituents crucial health care reform" bill, there was no intra-party criticism on Adler's no vote.

Adler's defenders note that he has voted in favor of two of three major policy initiatives important to Democrats: the stimulus bill and cap-and-trade (the latter of which won the support of three New Jersey Republicans – a majority of the state's five-member GOP delegation).

"Since June, he has consistently stated his concerns that the House bill did not do enough to lower heath care costs for New Jersey families or make health care more affordable in the long term. He hopes that the House bill will be improved before it is sent to the President," she said.

The Sarbanes-Oxley amendment, Prael noted, "passed on a bipartisan vote and was supported by the White House" and, Prael argued, would "help create jobs and strengthen our economy."

Republicans, for their part, say they aren't cowed by Adler's fundraising or moderate voting record – especially in light of the results of the gubernatorial race, where Republican Christopher Christie beat Gov. Jon Corzine despite being massively outspent.

"Adler's been so successful in raising money that it's created almost a sense of inevitability, which I don't agree with, because look what happened with money here: environment and message trumped money this year," said Burlington County Republican Chairman Bill Layton.

Ocean County Republican Chairman George Gilmore said that, once more firmly entrenched, the current Adler, of DC, will vote more like the former Adler of Trenton.

"I think if John Adler gets a second term you'll see his true colors come out and he'll vote his true bias, which is liberal Democrat," he said. 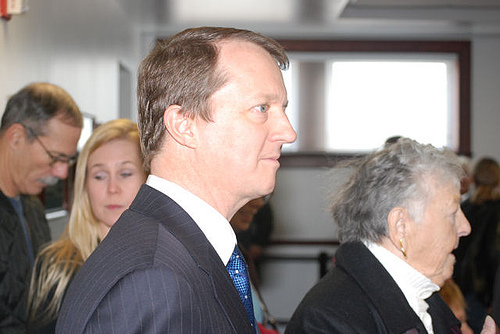