NEWARK – North Ward Democratic leader Steve Adubato hit back today against those critics in his party who bashed him for embracing Gov.-elect Chris Christie in the aftermath of the gubernatorial election at the charter school Adubato founded.

"First of all, the election's over, if we didn't come together we're going to play partisan roles and we all lose," Adubato told PolitickerNJ.com. "Codey knows that. Come on. He picked a Republican, Leonard Lance, to swear him in. What was Dick Codey saying then? He made a deal with the Republicans to hold onto his Senate Presidency to save his seat when Nia Gill challenged him. Stop.

"Tell Codey this is America. Teach him a lesson. We don't control who does what when they go into the booth and vote."

The City of Newark as a whole hauled in roughly 4,000 fewer votes for the incumbent governor than it did for Corzine's first gubernatorial effort, mirroring Corzine's four year fall-off everywhere around the state.

Adubato said he proudly arranged an event for Christie at the Robert Treat Academy on the day after the election when Christie called him.

"We're Americans, do I have to tell you that? This is not about being a Democrat or a Republican, this is about people having a job," Adubato said. "Listen to me, I told the kids, 'your parents didn't vote for him, but he won the election.' I respect him.

"After he won, where did he come? He came here, to Newark. He has his priorities right. He reached out to me and I said, 'what, are you kidding me? Of course you can come here.' I would be happy to have you here.'"

Adubato has had a longstanding political relationship with Corzine, who made substantial donations to Adubato's private education institutions.

"He was a public officer," the Newark leader said when asked to consider Corzine's legacy. "He's a good man, a very good man. He was very good to us. He helped build our school. That was over ten years ago. He's a decent guy. He should not be upset. He was a senator and a governor. Not bad." 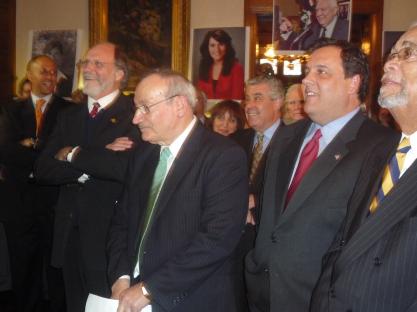