The primary is a year and a half away, but state Sen. Sandra B. Cunningham (D-Jersey City) is in danger of being tossed off the Hudson County Democratic Organization's (HCDO) line in 2011.

That development could spark an intra-party fight like the one that engulfed Hudson County politics two and a half years ago, when a challenge by then-Assemblyman and Union City Mayor Brian Stack to former Senate Majority Leader Bernard Kenny's (D-Hoboken) had county-wide implications. Back then, Cunningham kept the seat of former state Sen. Joseph Doria (D-Bayonne) for the HCDO, fending off a challenge by former Assemblyman Louis Manzo (D-Jersey City), who was backed by the rival Democratic organization led by Stack.

That conflagration died down after the 2007 primary election, but Cunningham's decision in June to block Gov. Jon Corzine's appointment of Hudson County Executive Tom DeGise to the Port Authority of New York and New Jersey has – at least for the time being – turned the party apparatus against her.

DeGise said he had the support of all 12 Hudson County mayors for the Port Authority spot. With so much of the Port Authority's infrastructure in Hudson County – the Lincoln Tunnel, the Holland Tunnel, the Bayonne Bridge, most of the New Jersey portion of the PATH system, the Auto Marine terminal in Bayonne – DeGise said that the county should have a representative on the board of commissioners.

"Just one person – I think it's a curious system that allows for one person to block the will of a ton of others. But that's the system," he said.

Speculation that Corzine would appoint Elizabeth Mayor J. Christian Bollwage to the post instead – a political ally of state Sen. Raymond Lesniak (D-Elizabeth), who is Cunningham's Trenton mentor – did not come to fruition.

Still, while he doesn't hide his anger at Cunningham, DeGise thinks a public fight can be avoided.

"Diplomacy should always be used before a sledgehammer," he said. "I can remember back now to '07, and the spark between Bernie Kenny and Brian Stack over the Senate seat just blew up into a county-wide fight, and I really to this day believe that better diplomacy could have been used to avoid that."

Freeholder Bill O'Dea's name was also raised, but he said the chances of him running are extremely slim. Not to mention that he has lived in the 32nd District since early this decade, when its border with the 31st – where he used to live – was drawn right through the middle of his street.

To throw Cunningham off the line, DeGise would need to enlist more people than just Jerramiah Healy, who now in addition to being Jersey City mayor is the HCDO chairman. Cunningham's opponents also need the support of the two legislators/mayors who control major blocs of votes: Stack and North Bergen Mayor Nick Sacco.

Further ruffling Democratic feathers was the announcement yesterday that Cunningham will serve on Republican Gov.-Elect Chris Christie's transition team. Although political observer chalked up the appointment to the well-publicized friendship between Cunningham and Christie (Glenn Cunningham, a former U.S. Marshall, forged a friendship with Christie, the former U.S. Attorney, over their federal law enforcement backgrounds), conspiracy theories abound.

Some Democrats are suspicious that Cunningham asked the state Democratic Party for funding to run her own get out the vote effort in her district but didn't deliver – a charge that Ray Lesniak says is absurd.

"Actually I asked her to take charge because she's the biggest vote getter in that district," he said. "If there was a conspiracy theory, it applied in every single district throughout the state."

Lesniak said he does not think Cunningham is in any political danger because she of the votes she has been able to pull in.

"She's a big vote getter. She's very popular in her district, so I don't see how she could possibly be in trouble," he said.

The Cunningham name means a lot in Jersey City, especially among the city's African-American voters. But her operation has been hobbled. Of her top two operatives in Jersey City, one, Bobby Jackson, died suddenly of a heart attack after attending an Obama rally in early 2008, and the other, Joe Cardwell, is charged with taking bribes from a federal informant.

Still, if a year and a half is a long time in politics by normal standards, it's an eternity in Hudson County. Some local insiders expect the conflict to blow over as Cunningham and party leaders resolve some disputes, including who her assembly running mates will be in 2011.

Cunningham, for her part, says she hasn't even thought about a challenge.

"Two years is a long time away from now, so I'm not even thinking about that. I'm doing my job as a state senator and I think I'm doing a great job. That's all I have to say about that," she said. 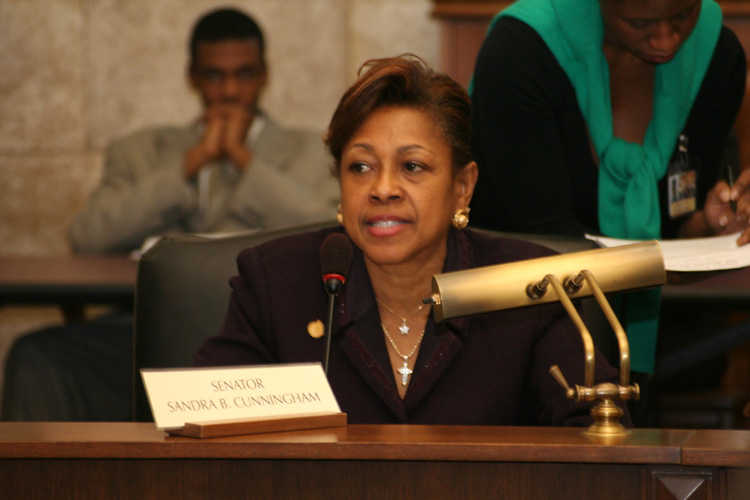