NEWARK- A year ago they were fighting each other, but their local rivalry in the Central Ward created sparks from below that ignited Barack Obamafervor from above to create an excellent environment for high Democratic Party turnout in New Jersey's biggest city.

This year, Central Ward Councilman Charles Bell and the man he defeated, labor leader Eddie Osborne, are on the same team and both seeing the battle develop from the same forward position.

"It's moderate turnout compared to last year, nothing like Obama," Bell said of Election Day turnout."I will say this, though: compared to mostgubernatorial years, turnout ispretty good."

Bell admitted that the Central Ward has been an organizationaltrouble spotin Newark for the Corzine campaign.

"The problems were created by the death of my buddy (former Central Ward Chairman Dwight Brown, of a massive heart attack this past summer)," but there were enough overlays to cover up the problems," said the councilman.

Osborne is circulating throughout Essex County.

"I'm out here now supporting labor and lineA candidates andI can honestly say that people are coming out," said thebusiness manager with Area 1153 Local Laborers."For this time of day, there aremore people thanI expected. We put a lot of work into the Central Ward. That's personal for me. We always want a good turnout, andthe weather's good, which is in our favor."

A Central Ward source said if the Corzine people can pull 25-35% of what Obama garnered last year, the governor's in fighting shape in Newark, but anything below that, "andwe're in trouble – and right now, we're below that." 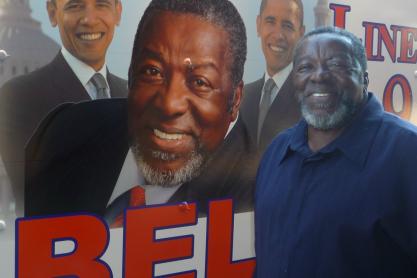