"Idon't know what to expect at all from Chris Christie, and probably won't get any kind of clues until the transition team changes the guard, but I do believe Christie's win changes the dynamic for the senate presidency and the same thing for the speaker of the assembly," said Bowser.

In a North for South top-seatswap, Assemblywoman Sheila Oliver (D-East Orange) also has enough votes to win and to succeed Speaker Joe Roberts (D-Camden), according to Democratic Party sources.

"This wholeneeds to be thought about a little bit more with the governor losing," said Bowser, a longtime Codey ally."I reach that conclusion based on thebelief that there is a need for more experience, which Codey clearly exhibits, as well as anability to work on both sides of the aisle.

"I've always thought that wasn't a done deal based on the outcome of the governor's race," added Bowser, whose town went for Corzine over Christie, 12,047 votes to 365.

The veteran East Orange mayor's decision came even as Oliver's and Sweeney's key intra-party ally, Essex County Executive Joe DiVincenzo continues to call mayors and legislators in his home county to shore up support for a run next yearfor his third term in office.

Bowser is withholding a commitment of support for DiVincenzo at this time, with the hope that the county executive rethinks the Sweeney-Oliver deal and backs Codey for Senate President.

Asked if he had ruled out opposing DiVincenzo next year, Bowser, who overwhelmingly won his reelection bid on Nov. 3rd, said, "No, I have not ruled that out." 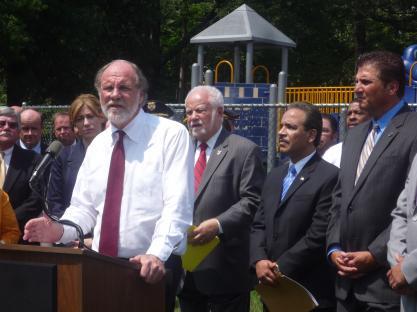