PARK RIDGE — When Gov. Jon Corzine raised asset monetization from the dead in an interview written up last week by The New York Times, Republican gubernatorial candidate Chris Christie did the obvious: he seized on it and beat the toll hike drum as loud as he could.

But largely overshadowed by Gov. Jon Corzine’s conjuring up the ghost of monetization past (or not, according to pushback from the Corzine campaign), was Christie’s apparent backing away from several key campaign planks.

According to the story, Christie no longer said he would fully restore property tax rebates, a pledge he made in a GOP primary debate to roll back the sales tax, backed away from refusing to use “one shot” measures to balance the budget and deferred plans to cut income taxes, eliminate the business tax surcharge, permanently fund open space and restore higher education funding.

At his first campaign stop of the morning, at the Park Ridge Diner in in northern Bergen County, Christie argued that his campaign rhetoric has not changed.

“What I’ve always said is we’re going to restore property tax rebates, we just have to determine at what level we’re going to restore them. I’ve always said that, right from the beginning. Secondly, I never talked about rolling back the sales tax – ever. It’s never been a priority of mine, and when I’ve been asked about it directly I’ve said it’s a low priority.” he said.

That’s not to say that he was disputing the accuracy of the report.

“I’m not disputing anything. It’s just, listen, reporters characterize things in certain ways. I don’t agree with their characterization,” he said.

Christie said there was no inconsistency to clarifying his own comments to the Times while jumping on Corzine’s monetization statement. which Corzine similarly tried to revise post-interview in less politically treacherous terms (the Times stands by its story.)

While Corzine may have handed a political gift to Christie on the monetization front, the campaign has not cut it into new commercials. On hand for this morning’s campaign events, Christie’s top strategist, Mike DuHaime, said the campaign was doing robocalls on the subject, and that some of their broadcast advertisements already hit Corzine for wanting to raise tolls before the Times story came out.

Toll hikes issue did not appear to weigh heavily on voters’ minds in either of Christie’s two Bergen County diner stops this morning – at the Park Ridge diner or the Candlewyck Diner in gritty East Rutherford, about 18 miles south.

Joe Fusco, a 52-year-old high school physics teacher from Hillsdale who described himself as a life-long Republican, approached Christie at the Park Ridge diner and told him that, during Corzine’s run for U.S. Senate in 2000, he approached him and was rebuffed by security when he tried to ask him a question.

“You won’t need to worry about him answering your questions after Tuesday,” Christie told him.

Bergen County is crucial to Christie – or any Republican’s – election strategy. One of the most common and truest refrains in Jersey politics is that Republicans do not win statewide without carrying Bergen. To do so, Christie will have to pull of big numbers in the towns in the wealthy, Republican-leaning northern portion of the county – like Park Ridge – while fighting for a narrower margin of victory in the southern, blue collar swing towns like East Rutherford.

Christie got a friendly reception in East Rutherford as well, but he faced some more pointed questions.

Anne Pucci, a 30-year-old single mother who works as a waitress at the Candlewyck and is working towards her MBA, fired off a string of questions at Christie on abortion rights, higher education financial aid, veterans’ issues and the unemployment rate.

Pucci, 30, is pro-choice and not registered with a party, but was not sure if that would be a deal breaker and remained undecided.

“It’s something that I haven’t made up my mind on,” she said.

While Obama is set to headline two massive rallies for Gov. Corzine today in Camden and Neark, Christie’s schedule is full of lower key events. After the two Bergen County diner stops, Christie headed to Morristown, where his campaign was holding a small rally on the Green. After that, he’s scheduled to make a stop at a diner and a restaurant in Monmouth County before ending the night at an Ocean County Republican rally in Toms River. 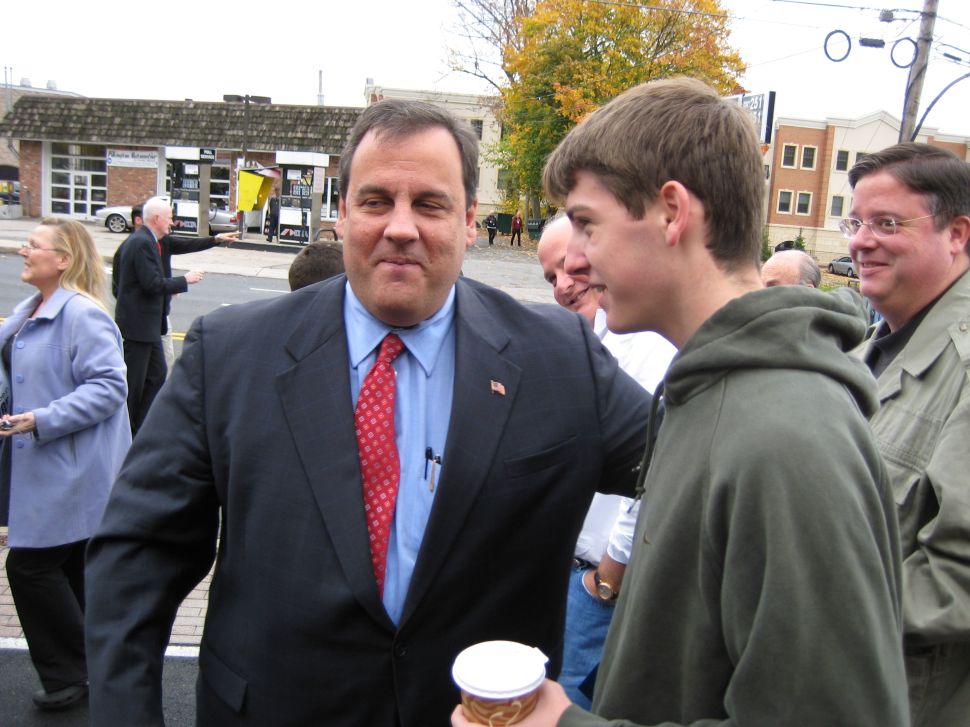