NEWARK – Over100 people packed the Spot on Tuesday night for a fundraiser in support of West Ward Councilman Ronald C. Rice, who's up for re-election next year as a member of the Booker Team.

So far, Rice has no challengers to the seat he has held since he landed in office three and a half years ago and there was considerable buzz in the room and all up and down the bar about his moving up politically in the not too distant future.

ButRice proclaimedthat whatever happens next year or beyond, he intends to protect his "little brother" on the council, South Ward Councilman Oscar James, Jr.

"We're going to do battle for this man in the South Ward next year," Rice toldan enthusiasticcrowd of supporters at this event hosted by his campaign finance director Vin Gopal asRice stood onstage with Councilman James, who knows he's at ground zero politically in Newark right now.

For even asMayor Cory Booker contends with a geared-down challenger in former municipal judge Clifford Minor, James faces what most observers of the scene believe will be the mosttenacious 2010 council contender, former CouncilmanRas Baraka, the Central High School principal, activistand son of beat poet Amiri Baraka.

An ally of Booker's going back to their 2002 run against Sharpe James and his team, and an early and active supporter of Barack Obama, Rice counted among hisbackers in the roomstate Senate President (and former Gov.) Richard Codey (D-Roseland), Giblin, AssemblywomanMila Jasey (D-South Orange), At-Large Councilman CarlosGonzalez, and former Councilwoman Gayle Cheneyfield Jenkins.

Codey's alliance with the younger Rice (son of Sen. Ronald L. Rice)goes backyears, but thesenate president, embattled in his quest to remain leader of the state senate, felt especially moved by the elder Rice's energetic public statements of support on his behalf.

"He's always going to be our governor, because we can identify with him," a sanitation worker at the fundraiser told PolitickerNJ.com.

Crediting his father withteaching him everything he knows about politics, Councilman Rice amplifiedhis family's support for Codey.

"To my governor and the senate president of New Jersey, and if I have anything to say about it, the present and future senate president," Rice told the cheering crowd as he broughtthe Essex Countyveteran political leaderto the front of the room.

"You can't get anything better than a Rice," said Codey. "If you're in a war, and youturn toyour leftor to your right and you're with a Rice, you can't do better than that, baby.

"Ron Rice and these young leaders are the future,"addedtheformer governor. "They'll be going to Trenton and they'll be going to Washington. Now, you know, you look at the results from last week, and there were a few people who left this governor faster than a prom dress. But it's not the bosses that run things ultimately but people like this great young man. Ron, you've got my support as long as you keep running and running and running." 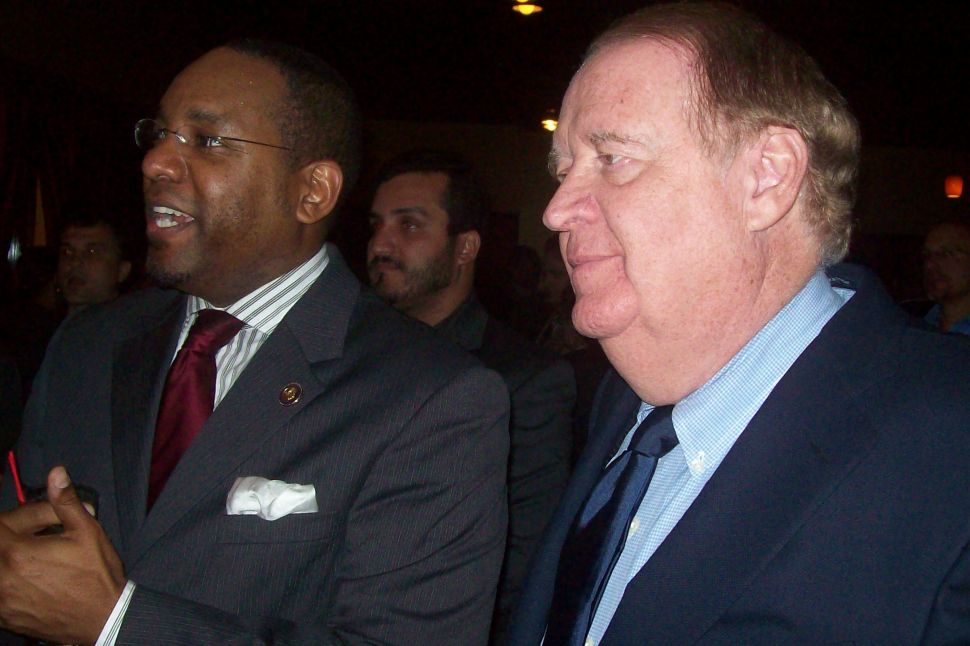