"Get out there and vote," Corzine roared to a room packed with men who claim membership in this electrical workers union numbering 1,200 strong from around Central Jersey.

"Everything is what happens, not what people speculate," hetold PolitickerNJ.com moments laterwhen asked about his trust in the strength of the Democratic Party machine. "We think we have the better operation, and it's up to people to execute."

Askedwhy the voters of New Jersey should give him another four years, Corzine said, "I'm the best guy to get us out of this recession on the issues that matter: education, healthcare, partnership with the president; I'm in a much better position on every front, not for giving tax cuts to people making over $400,000 a year."

"You talk to any members and they are dissatisfied," Gusciora told PolitickerNJ.com. "They are not easily convinced, and that's what we're up against – that fear factor."

"This is a group that has experienced layoff durations that have been longer than at any other time – seven to nine months," said the assemblyman, who's running for re-election in the 14th District with Greenstein.

"Therank and file Building Trades workers are 100% behind this governor, who has demonstrated his commitment to prevailing wage, project labor agreements and responsible contractor language deals," he added.

On his way into the union hall, Corzine encounteredWatson Coleman.

The two hugged, long and hard in the carpeted hallwayas cameras flashed.

"I just greeted the governor," Watson Coleman said later. "I think I enjoy a very good relationship with him. I was just very encouraging to him and told him, 'I think you're going to win.'"

Poised to become Speaker of the Assembly with the retirement this year of Speaker Joe Roberts (D-Camden), the Mercer County majority leader was edged out of a North-South leadership package deal, but she wouldn't talk about that tonight.

"We have five overlays tomorrow, including union workers and paid election workers," said the son of former Gov. Richard Hughes, whose 1961 race for governor included an 11th hour boost from President John F. Kennedy, which helped propel Hughes to victory.

Hughes stopped short of talking up the parallels with President Barack Obama's visit to New Jersey yesterday on behalf of Corzine.

"I think Kennedy certainly helped my father get elected," said Hughes, "but clearly there were unique circumstancesin that with the first Irish American president and governor campaigning together. I would say, though, that its important to remember the relationship Corzine and Obama had when he was chair of the DSCC (Democratic Senatorial Campaign Committee).

His pep talk to the troops here in Lawrenceville was Corzine's second appearance before a labor audience inside an hour. Before arriving he rallied workers in Trenton at Laborers Local 172. Hughes and Watson Coleman simultaneously worked a crowd of African Americans on his behalf at the Shiloh Baptist Church. 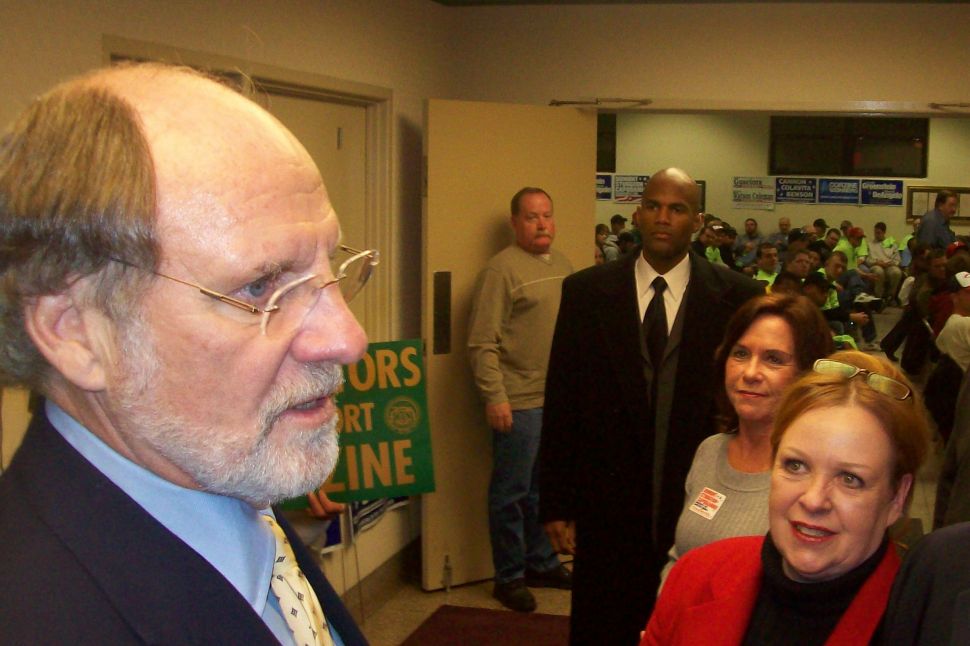