"Ithink it's all about the economy and people hurting in their pocket books," Spicuzzo said."They wanted a change. IthinkJon Corzinewas better equipped to deal with the economic crisis, but that's not the way voters saw it."

The party chairman conceded that Corzine's toll roads leasing plan didn't help him in the big counties most impacted: Ocean, Monmouth and his own Middlesex.

In a sign that either Middlesex County politicians on the ballot this year mostlyran away from Corzine while promoting themselves or that the incumbent governor's unpopularity was substantial enough to sink him on his own, none ofSpicuzzo's Democratic legislative candidates lost in their respective bids.

"Ifeel very good about the performance of the Democratic Party in Middlesex County," Spicuzzo said. "We lostJon Corzineby 7,000 votes but still maintained control of the Assembly and Freeholder Board, andToni Ricigliano won a great mayoral victory in edison. The voters are very smart and the voting public is hurting."

Corzine plummeted in Woodbridge, where sources close to local candidates for the town council said it would have been "suicide" to boast of their affiliation with the incumbent governor.

In local elections in the town's biggest municipality, Democrats maintained a majority on the council, losing just one contest in a traditionally Republican district. 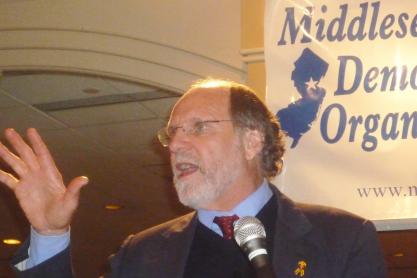