TRENTON — After a day in which everything ended up as planned, Democrats formalized their new leadership lineup and showed it off at a press conference this afternoon.

“It will be a tough act to follow Dick Codey in this role,” said Senate Majority Leader Stephen Sweeney (D-West Deptford), who will formally take the role of senate president in January.

Codey (D-Roseland) who tried to fend off Sweeney until the end, told The Ledger that there was “blood on the floor” in the caucus meeting where Democrats elected Sweeney. Sweeney did not return fire.

“He was more than a gentleman. He’s a very class individual and he’s shown that all the way through,” said Sweeney.

Sweeney said it was “unfair” to describe him as “punishing” allies of Codey by bumping the soon-to-be former senate president’s supporters out of committee chairmanships in favor of his own backers.

“It is now my turn to be senate president after eight years. It’s about other people having opportunities,” he said.

Sweeney stood with Assemblywoman Sheila Oliver (D-East Orange), who is the speaker-elect; Senate President Pro-Tem-Elect Nia Grill (D-Montclair), who just bumped Shirley Turner (D-Lawrenceville) for that leadership role; Assembly Majority Ledger-Elect Joseph Cryan (D-Union), who is finishing up his last term as Democratic state chairman; Senate Majority Leader-Elect Barbara Buono (D-Metuchen); state Sen. Paul Sarlo (D-Wood-Ridge), who will chair the appropriations committee, which Buono used to lead; Assemblyman Louis Greenwald (D-Voorhees), who will continue to chair the assembly appropriations committee; and Assemblyman John Wisniewski, who was not given a leadership role today but could be in line to be the next Democratic state chairman.

The newly-elected leaders stuck to a tight message. They expressed willingness to work with Republican Gov-Elect Chris Christie, but said that they would hold to Democratic principles and a commitment to the poor and vulnerable citizens.

Cryan, who does not plan to run for reelection as chairman of the Democratic Party, emerged immediately as the caucus’s attack dog, punctuating the Democrats’ unwillingness to bow to Christie by noting that every incumbent won reelection, and that Democrats only lost one seat in the legislature.

“We do intend to, at a very strong level, hold Gov.-Elect Christie to the promises he made to the people of New Jersey. As we hear them, we’ll continue to work with him in a reasonable and rational fashion” he said. ” But the idea that we’re simply going to listen to what the governor says — we also understand that we all went through a very tough election as well… We intend to make sure where we can work with him we will. Where we can’t we’re going to make sure we continue to stand for our Democratic values.”

Oliver, for her part, said that she was thrilled to be the first African-American woman speaker – and only the second African-american and second woman in the role.

“If you want to be a catalyst for change, you have to be in the driver’s seat,” she said.

Buono noted that she was the first woman majority leader. She said that having a Republican governor to work with presented a unique opportunity to change what she called a cynical public perception about politics and government.

“People want and deserve more. We need to set an example, and we have a unique opportunity to do so,” she said.

During questioning, Sweeney was asked about whether gay marriage would be voted on in the lame duck session. He brushed off the question, noting that Codey will remain senate president until January and that it’s up to him to move the legislation.

“This is not voting on a driving law, this is a personal, personal issue that a lot of people have very strong feelings towards,” he said. “We have not taken a head count at this point. We are just starting a discussion.”

Codey issued a statement congratulating the new leadership team after the press conference.

“We have a lot of extraordinary challenges that lie ahead and I look forward to working cooperatively with the new leadership to help tackle the pressing problems facing our state,” he said. “It’s been a great honor to serve as the leader of the Senate Democratic Majority for the past eight years. This has, without question, been one of the greatest experiences of my life and I’m proud of the many progressive accomplishments we have made on behalf of the residents of New Jersey.” 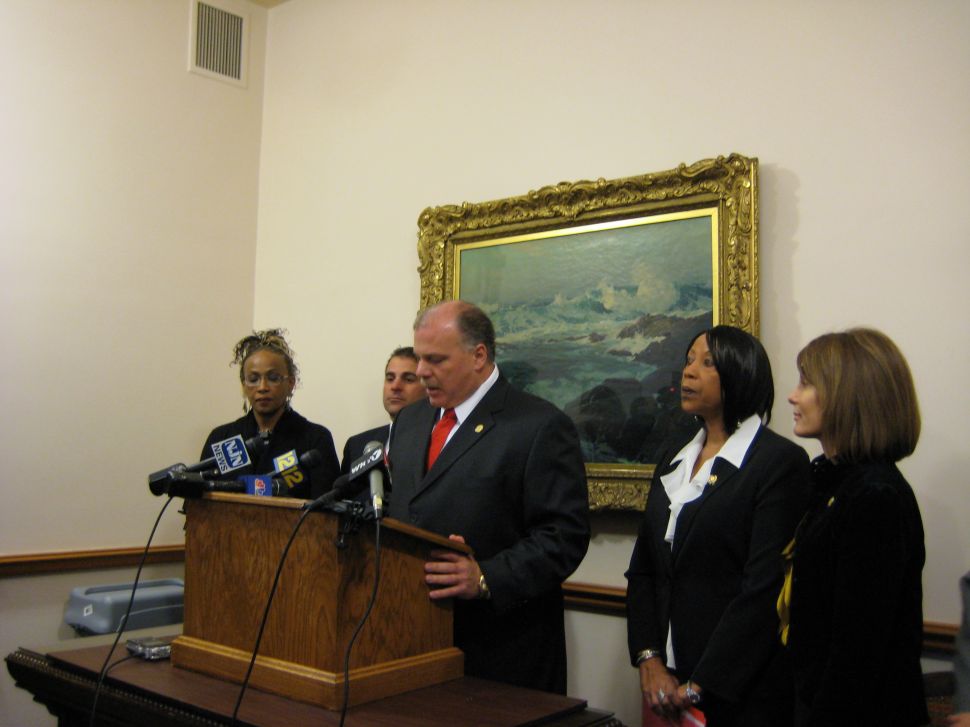