Leadersof a once fractured minority party -over the last years seemingly constantly at the verge of splitting farther apart -see unity in Gov.-elect Chris Christie.

Kean's son, state Senate Minority Leader Tom Kean, Jr. (R-Westfield) said he believes Christie's leadership abilities are expansive enough to include both the conservative wing and moderate wing of the GOP, in addition to independents and Democrats.

Not unlike his own father's skills in that regard.

"My father worked with a Democratic legislature in both of his terms as governor," Kean said of former Gov. Kean. "Chris also has the ability to work in a bipartisan way."

"I'll be curious to see what he has to offer," Assemblyman Joe Cryan (D-Union), the state Democratic Party chairman,told NJN News in the aftermath of a grueling campaign.

"It had better be in the interest of the people of New Jersey," he added.

"Christie's in the catbird seat," Gusciora said."I think he could very well be a two-termer. He could offer a $15 billion budget and dare Democrats to increase it. The programs to be cutwould bethose affecting our base: jobs, healthcare and state workers. Democrats are going to have to step up to the plate."

Alert to the $8-$10 billion budget deficit the state is facing,Kean this week called on Corzine not to engagein any lame duck spending.

"We've seen it before, a late flurry of spending and massivelast minute appointments, and in the interest of giving Gov.-elect Chris Christieflexibility in a budget crisis, I call onGov. Corzine not to do that," said the minority leader.

On the conservative side of the spectrum, state Sen.-elect Mike Doherty (R-Washington Twp.)believes Christie ultimately paid proper respect to the party'sconservative wing during thegeneral election.

The conservative feels especially energized heading into the upper house knowing Christie will be governor.

"Gov-elect Christie hasa good ability to identify leaders," Doherty said. "I remember some time ago seeing(Lieutenant Gov-elect) Kim Guadagno at an event andIthought, 'she's really on the ball.'Obviously, Chris Christiefigured it out. That's what madeRonald Reagangreat: the confdence to put winners in key roles."

What about movement conservative leader Steve Lonegan in the Christie cabinet?

"Steve Lonegan is a smart guy with incredible energy," said Doherty."It would be a tremendous asset to have him in the cabinet. Of course, it's up toChris Christieto put his team together."

Of Christie's prospective relationship with the legislature, "He certainly knows all the legislators and has a good relationship with leadership," said Doherty. "Being a Jersey guy means a lot. I thinkJon Corzine, coming from Illinois, was then stuck in his tower at Goldman Sachs. You look at that compared to a guy (Christie) who was born in Newark,who moved up Bloomfield Avenue to Livingston, whoknowshow tough people are in New Jersey."

"As a new member of the Republican caucus I'm impressed with the leadership ofTom Kean, Jr.," said the Warren County-based senator."He recognizes if the Republican Party stays together we're stronger."

Keanwould not say whether he believes Christie's presence as governorwould alter the terrain heading intonext year's vote in the full senate.

"The Republican caucus has 17 votes,Senate Majority Leader Steve Sweeney (D-West Deptford) has 15, and Senate PresidentDick Codey (D-Roseland) has eight," said Kean. "That dynamic has not changed." 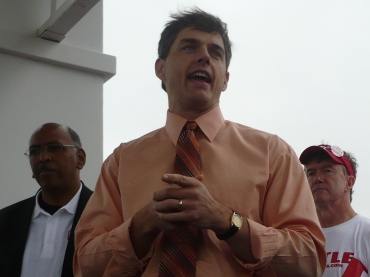