Assemblyman Reed Gusciora (D-Princeton) today blamed party bosses for deal-making when they should have been focused on re-electing Gov. Jon Corzine.

"Party leaders undermined the governor by having aparty leadership fight," said Gusciora."They reinforced the message that if Corzine won, the reins of power would be handed over to special interests."

The object of a state investigation, Newark's North Ward party organization turned out 1,000 fewer votes for Corzine on Election Day than it did in 2005. In South Jersey, the Democratic Party machine was unable to preventGloucester County -Sweeney's homebase -from goinginto the column of Chris Christie, who defeated Corzine statewide, 49% to 45%.

Adamant in his belief that the dimensions of the battle went beyond the corridors of Trenton, Guscioraalso criticized the Corzine campaign.

"Jon Corzine deserved re-election," said the assemblyman."He did everything tehnically correct, buthis message wasn't well conveyed. The campaign decision to stay away from 101.5 just fed into the electorate's anger out there that there needed to be wholesale change." 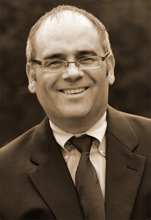