That would be Tim Dougherty, whoon Tuesday night won the Morristown mayor's race with 64.62% of the vote on a night when every municipalitywent for home county gubernatorial candidate Chris Christie by large margins with the exceptionof Dover, Victory Gardensand Morristown.

Doherty took pride in the fact that he won without going negative on his opponent, local businessman Jimmy Gervasio.

"I told (campaign strategist Barrett) Tommy I'mnot putting out one piece of negative literature," said the mayor-elect."Why? I figured somebdy's gotta start doing it that way.Voters want to hear about what you're going to do."

"The distinct difference between my general election opposition and us was we had pulled the community together in the primary and we stayed together," said the mayor-elect. "Wewere in a capsule here in Morris County (which went 60% to 31% for Christie over incumbent Gov. Jon Corzine) because we kept it so local. Thiswasn't about Corzine or Chritstie, itwas about Morristown. We said from the beginning, this is our campaign for our community.

"We ran a very organized campaign," Dougherty added. "On Election Day, my wife (local party chair Mary Dougherty)and Ihad more than 50volunteers working. We had every polling place staffed andrunners committed to supporting us following up on people. We ran it from 6 a.m. to 8 p.m., but we stillcouldn't get to 3,000 votes, which was my goal."

Dougherty's entire slate won, as he personally defeated Gervasio 2,572 to 1,402.

Chiefoperating enegineer at the Prudential Center, Dougherty had Newark Mayor Cory Booker in for a fundraiser at one point during the general fora campaign that ended up costing about $80,000.

In cruise control through the most of the general, Dougherty weathered a Gervasio hit-piece emphasizing the Democrat's past DUIs.

"People never get the full story; they don't know the circumstances," Dougherty said."No one should drive while under the influence. I don't drink andI drill into people, 'don't drink if you have to drive.'However,I think people want to see if you hit a wall in your life, what did you do to change it? It's all about character building."

Last month, Dougherty encountered then-candidate Christie in a Morristown diner and they wished each other luck on the campaign trail.

"Ihope he keeps true to his word that it's about community and we all have a common bond," Dougherty said."We're all New Jerseyans." 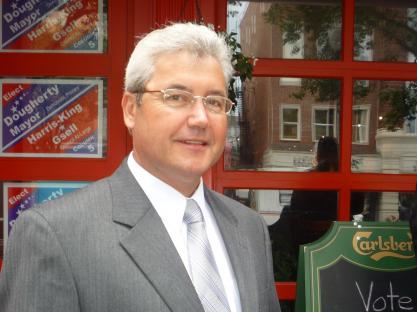