CHERRY HILL – "Machine, what machine?" deadpans retiring Assembly Speaker Joe Roberts (D-Camden), shuffling into Camden County Democratic Committee headquarters amid hundreds of bodies pushing toward the back door and the rally under a blue sky.

"There is no such thing as a machine."

Camden County Democratic Party leader George Norcross III is in the crowd, but his younger brother, Donald, is running the program.

President of the Southern New Jersey AFL-CIO Central Labor Council and assistant business manager of the International Brotherhood of Electrical Workers Local 351, Donald Norcross is also a candidate for the Assembly in the 5th District.

The union men and women on the pavement cheer heartily whenBuilding and Trades chief Bill Mullen pays his respects tothe labor leader who helped elect almost 200 union people since he took over the Southern Labor Council.

"This a governor with a great record," says Roberts. "He added 100,000 children to the health insurance rolls, revamped the school funding formula, launched new schools construction and provided property tax relief. The people know it. Look at the enthusiasm here today. These folks know that the differences between Chris Christie and Jon Corzine are as stark as they can be."

Corzine in his speech picks up on the energy level in the crowd, fueling the troops with his contention that he's the labor candidate in the race.

"This election is very clear," the governor shouts. "Two weeks ago in the debate, my opponent identified unions as the adversary. I see teachers and laborers and union members who work hard and play by the rules as role models. I was a labor senator and I am a labor governor and I stand with you!

"I'm all that stands between you and getting out the vote."

A roar from the crowd.

The machinery of labor movement men and women moves toward the parking lot and the waiting GOTV vans. 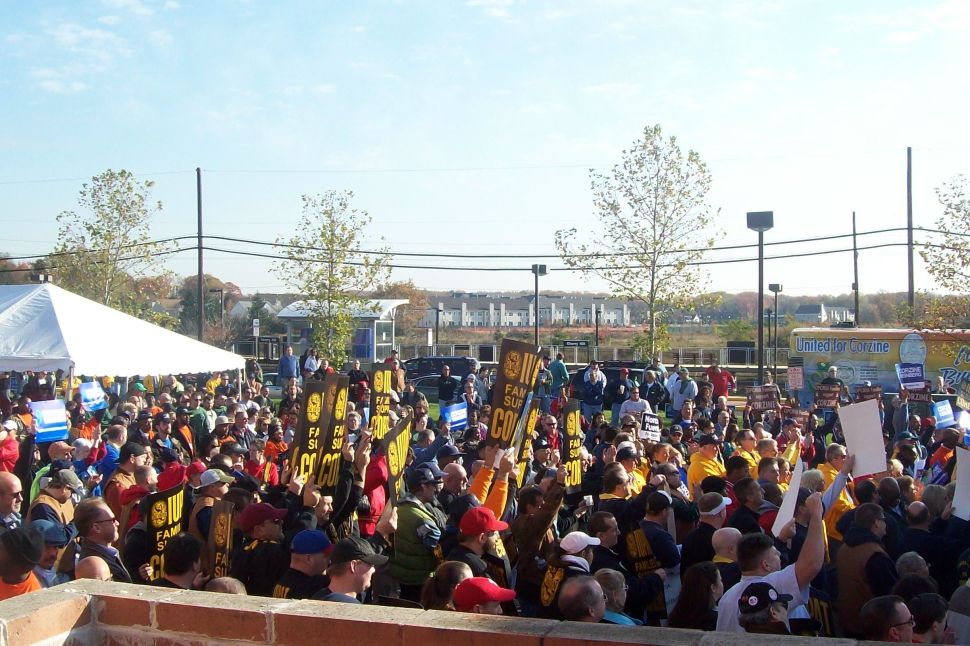