"Gov. Jon Corzine lost Marlboro by over 30%, but Ithink Marlboro voters were smart enough to acknowledge what we're doing, said the 39-year oldDemocrat."Notwithstanding the Christie tsunami, they believe Marlboro is moving in the right direction. We've cut operating expenses by 15%, and we'vereduced total payments by 11% through furloughs, layoffs, attrition and retirement. Government is running well and lean. By year's end, we hopeto dissolve our water authority, acompletely unnecessary layer of government with 14 people working there set up for political patronage at a total annual cost of $5 million. We're really treatinggovernment like a business andwe've acted more like a Republican than aDemocratic administration.

"Ihave not spoken to him butI am fully behindChris Christieright now, Hornik added."I hope he stands firm and makes the tough decisions. You can't worry about getting elected in four years, that's asure way to failure. He needs to 100% deliver on COAH (the Council on Affordable Housing, which Christie in the campaign promised to reform), a big factor for my residents. Christie has to undoCOAH, it does not work."

As he has socialized with other elected officials at the 94th annual League of Municipalities Conference in Atlantic City, Hornik acknowledges that party members have asked him if he wouldconsider running for governor himself in 2013.

"I was elected mayor for a four-year term and that's the job I'm focused on," said the son of the late Marlboro Mayor Saul Hornik."I never rule anything out. I learned, particulalry with the death of my father, that life changes in a moment, butwe're really focused on trying to do a good job here."

Founder and current president of the Central Jersey Council of Governments, Hornik was equally reserved in his assessment of 2011, when state Sen. Jennifer Beck (R-Red Bank) will presumablypursue reelection.

"Ihave a good relationship with the senator and we can do a lot of good work together," he said of his potential rival."We'll take a look at the landscapelater but Ihave nothing but compliments for the senator."

In the larger context of party rebuilding statewide, Hornik said Democrats must rejuvenate where possible.

"You're only new once and the public knows retreads when they see them," he said. "Congressmen and senators have shelf lives. It's okay to retire. As I've said before,I rent the mayor's office. Idon't own it. I sawSean (losing Democratic freeholder candidate Sean Byrnes) the other night.I encouragedSean to run again. This is an experienced, smart and articulate candidate. He's easyto support. We need good people in government, he just picked the wrong time to run."

"Ilike John," said Hornik."John's a friend, and(if Cryan retires from the position) I support John as party chairman. I am spending a lot of time with friends in Middlesex and Union and as the party bulds I will participate in any way I can to help the party succeed." 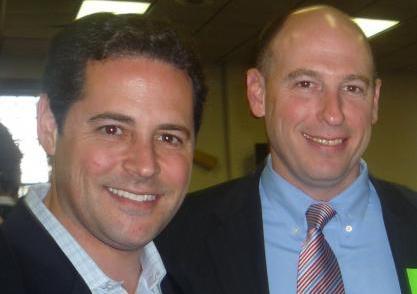