A second call will go out tonight, one in English and one in Spanish, broadening Menendez's reach into a combination of Latino and registered Democratic voters.

A third will go out tomorrow on Election Day.

"The senator has been very much engaged in the day-to-day operations of the Corzine campaign," said spokesman Mike Soliman."He has been on the phone with the governor constantly and has attended events on behalf of the governor, both with him and as a surrogate, and he is looking forward to a victory with Jon Corzine tomorrow."

Menendez never headlined the kind of big tent Jersey City rally for Corzine in the closing days of the campaign that some party members say the governor needed to shore up a beleaguered – and gun-shy, following the arrests this past summer of numerous political operatives – lower Hudson County.

The death of the senator's mother last week devastated him, said sources who attended the funeral.

Yesterday, while President Barack Obama was standing on a stage at the Rock with Corzine, Menendez, who chairs the Democratic Senatorial Campaign Committee (DSCC), was out of the state at a DSCC event.

But New Jersey's first Latino senator did cut a television ad with Corzine and attended weekly Hudson County Democratic Organization (HCDO) meetings in which he basically told mayors to back Corzine vigorously or else. Tomorrow, he is scheduled to campaign for Corzine in Camden County.

"He's been very active," Ben Dworkin, director of Rider University's Rebovich Institute for New Jersey Politics, said of Menendez."He is an extremely smart political strategist and his advice is always sought out. He did acouple of key things to help the Corzine campaign. He was involved in talking to Brian Stack (Northern HUdson County power broker), making sure he was on board; and the second thing is Corzine has used Bob Menendez to reach out to Latino voters.I don't know who else would have done that on that scaleexcept for Bob Menendez. He'snot as involved as he once was, buthe still has clout." 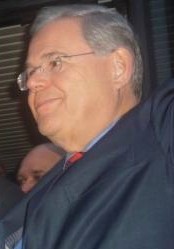