PATERSON – Barack Obama first sprang the "cousin Pookie" line in New Jersey back in 2006, when he was campaigning for Sen. Bob Menendez (D-Hoboken) in Paterson.

"He said to me, 'Vera, we know about cousin Pookie, don't we?' and I told him, 'We sure do," recalled the 4thWard councilwoman, who's served on the governing body for 24 years in this Passaic County anchor city where registered Democrats outnumber Republicans, 25,882 to 2802.

Now incumbent Gov. Jon Corzine is hoping the campaign efforts of President Barack Obama will amp up his numbers in urban areas like Paterson.

"In a strictly Democratic community like this, many folks will bevoting theDemocratic line, andthey know they have to get out and vote," said Ames."There is a connection between Corzine and (Mayor Jose "Joey") Torres withthe $30 millionwe get every year from this administration to keep the taxes down. There's a lot of work going on for Corzine.There's verygood coordinationbetween the Corzine people and local elected officials. We've been working with them for months.I can't speak for the rest of New Jersey, but Iknow he's going to take Paterson."

Sixth Ward Councilman Andre Sayegh, a political comer and potential mayoral candidate next year,isn't as positive in his assessment.

"We have our work cut out for us, let me tell you,"Sayegh added."The homeowners in the Lakeview section – we were trying to motivate them a lot and the motivation is not there."

Among those thousands at the Obama rally in Newark rally yesterday was Council President Jeffrey Jones, a declared challenger to Torres in next year's mayor's race, who like Sayegh can't draw a bead ontomorrow's outcome.

"Iwas charged up when I was in there (the Prudential Center) but whenI walked outI was where I was whenI when in," said Jones."I think we haveour work cut out for us.A lot of people know it's Election Day,and people are starting to talk about it, but most of the peopleI talk to arepretty reserved about what they're going to do.I can't put my finger on it, because it's not voter apathy. People know what they're going to do.They're just not sharing their position."

"Ithink it's looking good," countered 5th Ward Councilman Julio Tavarez."Youcan't compare the Obama campaign from last year to any other campaign. This isnot a national race, youdon't have thesame kind of energy for a national race, but we continue to do what the Democratic Party does to get the vote out there."

Veteran At-Large Councilman Ken Morris, Jr., who lives in the 2nd Ward, also said he thinks the ground game is there for Corzine.

"It's going to be a rabbit's race butI think Corzine pulls a rabbit out of the hat on this one," Morris said."Christie is not the right choice.There are going to be plenty of people out on the streets. We hope the weather's good and it won't rain. I think that if the New Jersey voter recognizes this election can be referendum on Obama, they're going togetbehind Governor Corzine. The Obama piece definitely helps."

Added Ames, "Corzine should be fine here, based on what I'm seeing, butI hope cousin Pookie goes and votes, too." 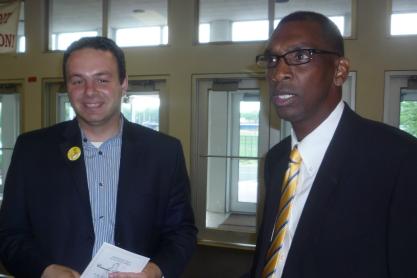