NEWARK – Wading through the "I love you's" as he stands at the microphone on a raised platform in the middle of the Rock, President Barack Obama derides the opposition as an outfit selling a failed economic model.

"That didn't start under Jon's watch's orunder my watch," Obama says of the national recession. "I wasn't sworn in yet. There's a little selective memory going on; a little amnesia about how we got into this mess.

"We're in this because of the same trickle-dwn economics the otherguy's party has been peddling for years," he adds, praising incumbent Gov. Jon Corzine as a "leader who's put ordinary folks ahead of politics.".

In the 2008presidential contest in New Jersey, 900,000 more voters than the usual 1.2 million that catapult a statewide candidate to victory turned outfor Obama.

"We will not lose this electionif all of you are as committed as you were last year," Obama tells the roaring crowd. 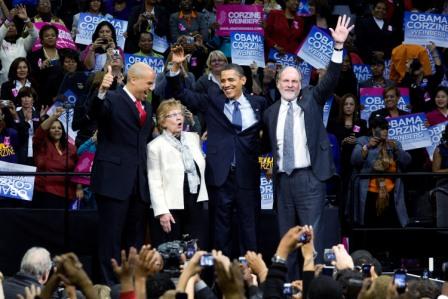