Fighting for re-election in the 36th District, Assemblyman Gary Schaer (D-Passaic) said an email blast today by a constiuent urging Orthodoz Jews to vote against Gov. Jon Corzine is not representative of the community's view of the incumbent Democratic Party governor.

"(Republican) Allen Shwartz's endorsement of Chris Christie is kind of like Richard Nixon endorsing the Republican candidate," said Schaer. "Our community is not in lockstep on the governor's race. Some rabbis are backing Christie, othersare supporting Corzine.As a member of the Orthodoz Jewish community I've certainly made my overtures on behalf of the governor."

Shwartzin his email panned Corzine,in part using the governor'slinkage toPresident Barack Obama as an argument against supporting the incumbent.

"Jon Corzine’s most visible proponent for the past month has been none other than President Barack Obama," Schwartz wrote on Passaic Today."One doesn’t have to travel for long through Passaic, Lakewood, or Teaneck to see the signs of President Obama and Governor Corzine campaigning together, arm-in-arm. …Make no mistake about it: the administration of President Obama has been the most hostile to the State of Israel since its founding in 1948."

The Orthodox Jewish community last year overwhelmingly supported John McCain over Obama, and sources in Passaic say many Jews in the community are advocating a split ticket of Christie for governor and Schaer for the Assembly.

"Corzine is looking good here," the mayor told PolitickerNJ.com a day after headlining a local rally on behalf of the governor, hours after the Obama-Corzine extravaganza at the Rock in Newark. "The key is getting people tot he polls tomorrow. This election will be won in the streets."

Blanco defeated Vincent Capuana last year with the backing of Schaer and the support of the Orthodox Jewish community – 2,000 bankable votes in the city every Election Day. 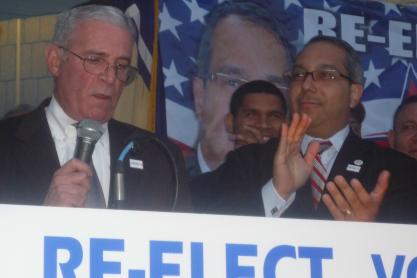