Her early critics quietly grumble that she's a political neophyte – the preferred Essex County term of art for someone who rises too quickly in politics.

"He genuinely wanted to effectuate glaring social issues of interest to a broad cross section to advocay groups, but did not understand the complexity of navigating the shark and barracuda filled waters of New Jersey politics," said Oliver when askedto reflect on Corzine's legacy.

Poised with a sufficient number of caucus votes to become the Assembly's first African American woman speaker as succesor to Speaker Joe Roberts (D-Camden), Oliver said she received a phone call yesterday from Gov.-elect Chris Christie but was unavailable. She said she intends to return his call today.

As state Senate President Richard Codey (D-Roseland) this afternoonconsiders what to do in lame duck about a gay marriage bill championed by outgoing Gov. Jon Corzine, the assemblywoman said the bill should receive an up or down vote.

"If the bill stands a chance, it stands a chance now," Oliver said."Gov. Christie isn't going to sign any bill on his desk to this effect and there are concerns now with how anti-groups have pumped up the volume across the state.Legislators are afraid to move forward, butI think that there should be an opportunity to vote up or down. Without question, in the assembly, there are asignificant number of members who would not support the bill.

"Isupport the bill because I believe gay marriage is a civil rights issue," added Oliver, who also favors up or down lame duck session votes on a long languishing wrongful death bill, and on a bill enabling people who are adopted to have access to their birth ceritificates.

During his successful campaign for governor, Christie propounded his support for charter schools and vouchers. The day after he defeated Gov. Jon Corzine, the gov-elect traveled to the Robert Treat Academy, aNewark charter school founded by North Ward Democratic leader Steve Adubato.

Adubato, father of the television personality with the same name,posed withNew Jersey'sincoming chief executive to the chagrin of some Democrats who felt he was too friendly with the enemy.

An ally of Adubato's, Oliver dismissed the criticism.

"Anyone that knows Steve Adubato would know historically, over the last 30 years,that hehas had an open-ended embrace for any and everyonewho can support his objective, which is service delivery through his organization,"said the assemblywoman, who enjoyed the key political support of Adubato acolyte Essex County Executive Joe DiVincenzoin her leadership launch.

"They get angry," Oliver acknowledged of critics, "butfrom a textbook point of view,Steve practices pragmatic politics. Some people saw it as shocking, but the reality is Steve is trying to keep his institution intact."

As for Christie's advocacy for education reform, Oliver said she's essentially willing to meet him halfway.

"Opportunity needs to be given to alternatives, andI have no problem with charter schools, recognizing, of course, thatnot every charter school is good," Oliver said."I'm leery about vouchers."

Six days removed from Christie's triumph over her party's governor, Oliver said New Jersey's independent voters clearly swung away from Corzine in a national economic downturn. But she also observed the relative lack of party engagement for Corzine, and suggested that party operativesrose too late in the game to give Corzine his best shot at winning.

The presumptive speaker has not recently spoken with Assembly Majority Leader Bonnie Watson Coleman (D-Ewing), who had herself sought the speaker's job in the wake of Roberts's retirement announcement, and who last week on Election Day wouldn't comment on her status in that regard. 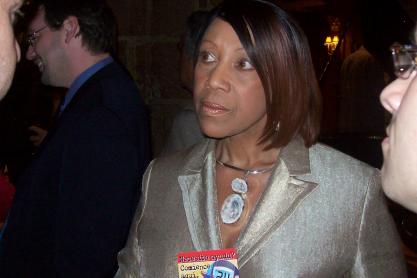